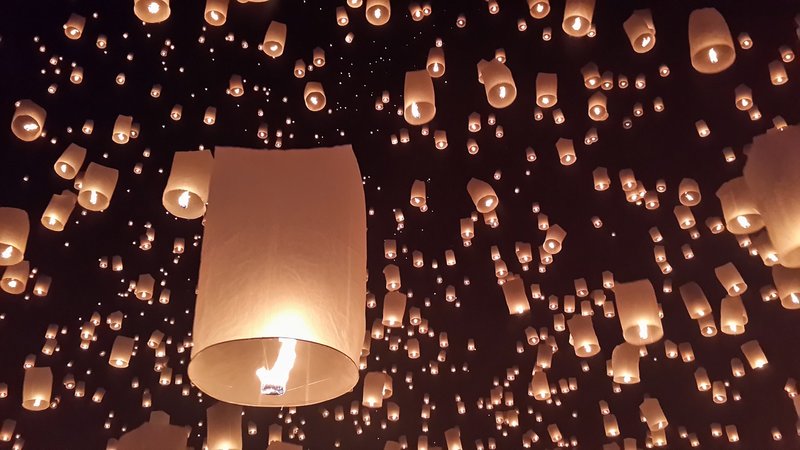 Every year, on November’s full moon night, Thailand celebrates two festivities: Loy Krathong and Yee-Peng. Each serves its own purpose in honouring the past, the present and the future, with one taking to the water and the other looking up into the sky. In Chiang Mai, where Yee-Peng is so big the international airport needs to close due to so many lanterns in the sky, these events have become iconic symbols of Thai and Buddhist culture (as well as major tourist draws). Here’s the story behind two of the most famous celebrations in Thailand.

November marks the end of the rainy season, when the weather turns lovely and the river is high. The full moon light reflects on the water, and on the local people preparing their krathong — small floating vessels made from banana leaves and carrying flowers, candles, incense sticks and coins.

The purpose of Loy Krathong is to praise the mother of water (Phra Mae Khongkha), as Thais believe that appreciation for water gives us a good life. It’s also a time to apologise for the pollution humankind has caused in our water system. Locals decorate their krathong with different types of flowers such as marigolds, sunflowers, amaranths and roses, to represent beauty. Candles and three incense sticks are for praying to the water, and the act of slowly pushing our krathong away into the river means we leave behind all bad things in the past year, to allow for good luck in the coming year. Some people will also leave nails and hairs in their krathong, for a piece of their past selves to float away. And some will put coins in the krathong to bring wealth and prosperity.

During Loy Krathong in Chiang Mai, there is also a procession through the city of massive krathong floats. Locals in each area of the city will prepare a decorative krathong and dress a woman in traditional Thai clothing, to be the neighbourhood’s representative and stand atop their krathong during the procession. Of these women, one will be crowned by a committee for the title of Queen of Beauty, which we call ‘Nang Noppamas.’ About 700 years ago, Nang Noppamas were the royal consort of the King of Siam, who initiated the Loy Krathong festival.

In ancient times, lanterns were only used for ceremonies in the royal palace. But today, the Yee-Peng ceremony is throughout the country. The celebration is a tradition of Buddhism, and a way of paying homage to Lord Buddha and his dharma teachings of doing good deeds and purifying the mind. The act of launching a lantern into the sky is said to be a symbol of our gratitude. On the same night of the full moon, you’ll see many thousands of lanterns filling the sky. It’s such a big event that even the Chiang Mai international airport cancels all night flights into and from Chiang Mai during Yee-Peng.

Seeing and celebrating Loy Krathong and the Yee-Peng Festival is a major highlight for visitors to Thailand, and a beloved ritual for locals, as thousands of lanterns light the sky and colourful krathong float along the river. No matter where you look, you will see the lights and hear people praying for good luck on our November full moon.

Be spirited away! Learn to meditate, offer alms to monks, and make an offering at a temple – this is a spiritual adventure for the seekers.