Blog > A spiritual tour of Nepal 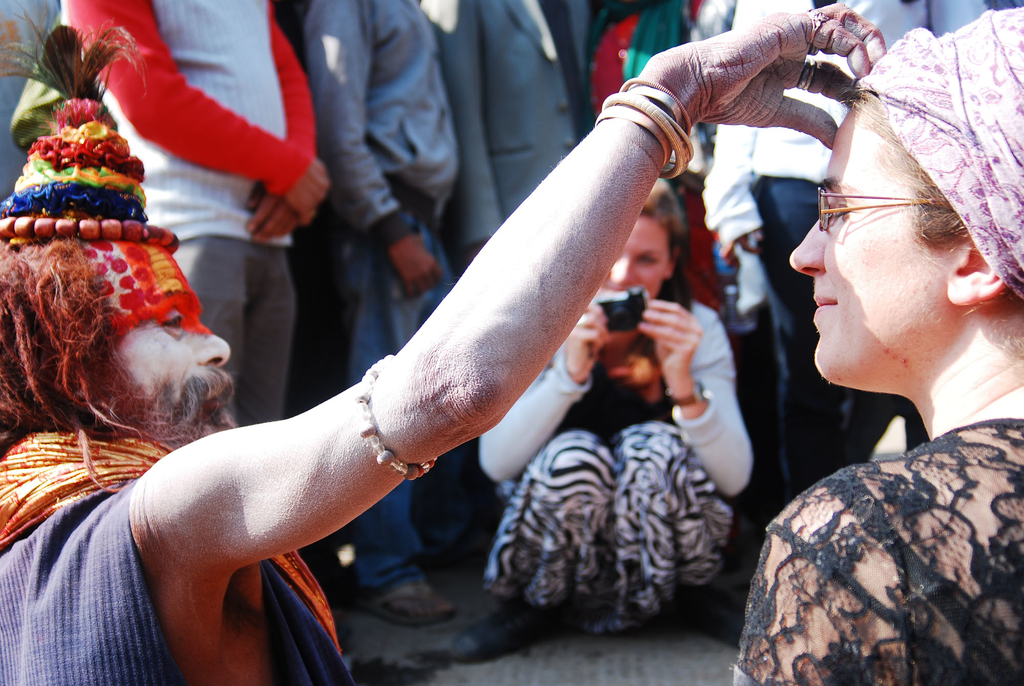 A spiritual tour of Nepal

From the moment you touch down in Nepal, you can feel something different in the air.

Nepal is one of the most deeply spiritual places I’ve ever visited. Beyond photos of Everest and the Himalayas, the images of Nepal most often circulated are of the painted, dreadlocked holy men, and the five-coloured prayer flags hung down every street.

As someone who isn’t personally connected to either Hinduism or Buddhism, I was entranced by the divine balance that seems to exist in Nepal. The “Roof of the World.” A spiritual mecca. I needed to know more — I needed to do all I could to learn about the history, culture and people of Nepal.

So on a hazy Tuesday afternoon, I set out on Urban Adventures’ Spiritual Nepal Tour with my guide Subash. We hopped on a public bus together with the one other person on our tour, and were on our way.

Our first stop was Pashupatinath, one of the holiest Hindu temples in the world. The entire complex is bursting with life, death and everything in between. There are sneaky monkeys trying to steal from you right inside the entrance. There are curious foreigners roaming about. There are religious rituals happening all around.

View of the Pashupatinath temple complex | Photo by Pixabay

The temple complex is located along the banks of the Bagmati River, an offshoot of the River Ganges. The Bagmati is said to have the same holy quality as the Ganges and is worshipped by Hindus and Buddhists alike. This temple’s deep importance stems from the fact that in order for the reincarnation process to happen, Hindus must be dipped in the river after death, cremated alongside it, and then their ashes must be carried away in it.

These cremations are happening all day long, every single day at Pashupatinath. Along one bank of the river this ritual was happening, and on the other bank of the river were the onlookers, consisting of foreigners and locals alike who had gathered to watch these sacred ceremonies. We joined this crowd and watched as three separate cremations — all in different phases — took place.

READ: Life and death on the Ganges ghats

This was my first time witnessing a public cremation ceremony, and it was a little overwhelming. At first I grappled with the idea of it being so public — in the culture that I come from, death and mourning are addressed much more privately. But as our guide continued to explain the ritual of death and reincarnation in Hinduism, I began to understand my implicit bias. I began to see the ritual for what it really was — a beautiful celebration of that person’s past and future lives.

As non-Hindus are only allowed on the Eastern bank of the river, we were only able to view the main temple from afar, but its beauty was still very much evident. And right alongside the temple is a space where devout Hindus come to spend the final days or weeks of their lives.

Along the Eastern banks of the river lies Panch Deval, a complex of five temples that used to be places of worship, but which now house elderly people and Sadhus (holy men). As we walked around the area, we were met with smiles, many namastes and curious eyes.

We then moved on to our next destination, Boudhanath, one of the largest Buddhist stupas in the world. After the devastating earthquake in Nepal in 2015, this stupa was renovated and is more spectacular than ever. The top of the dome is donned with a mandala (diagram of the Buddhist cosmos) and riddled with symbolic meaning.

I noticed right away that the foot traffic surrounding the stupas meant something. Everyone was walking clockwise around the structure, chatting with each other, stopping at prayer wheels along the way, or just lost in thought.

While making a full lap of the stupa, our guide taught us a bit more about Buddhism in Nepal. We visited a prayer wheel and had the wheel of life diagram explained. We were even given the chance to talk to a local monk and learn more about his relationship with his spirituality.

Getting an astrological reading in Nepal | Photo by Kathmandu Urban Adventures

After Boudhanath, we had the opportunity to have a Nepalese astrologer read our future. This differs from any psychic palm reading experience you may have had in the past, as your birth chart and astrological sign come in to play. I was told my financial future is purposeful and healthy (what a relief!) and my journey of self-discovery will take me places I would never imagine.

At the end of this incredible tour through Kathmandu’s soul and spirit, I really started to understand why everyone I’ve met who’s been to Nepal talks about it with such mystique in their voices. It’s a magical place. And what made it even more magical was experiencing it through the eyes of a local. Without Subash, the temples and stupas would’ve been interesting and beautiful, but having someone who’s grown up immersed in the deep spirituality of Nepal explain what each place truly means to them is an entirely different experience that everyone should have.

Want to have this writer’s experience? Book our Spiritual Nepal tour for a lesson in local culture, religion and traditions.