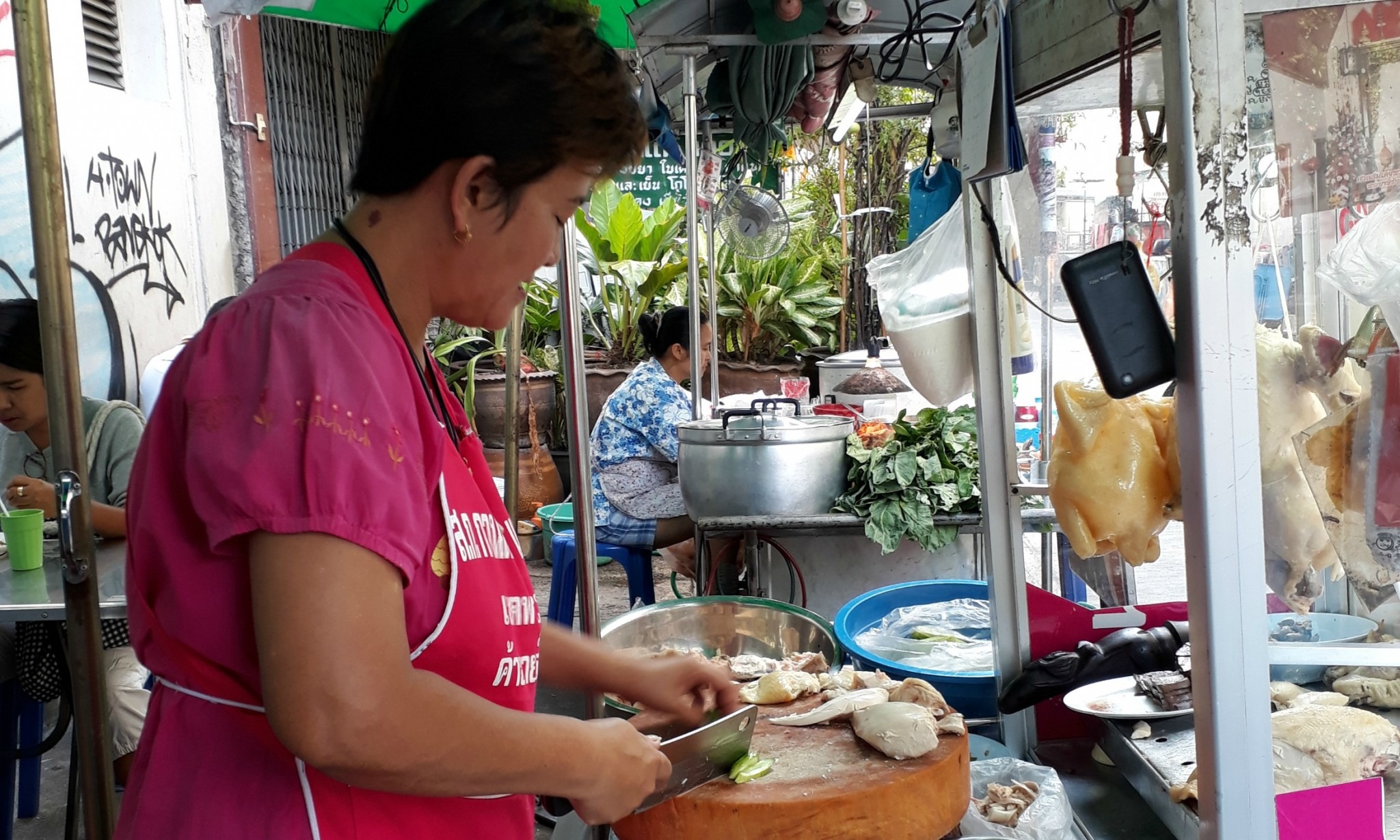 Maem’s tiny khao man gai cart opens and closes for the day even before more tourists have rolled out of their hostel beds. She cooks all night, starting around 11pm, and sets up her stall serving chicken and rice at 3am, capturing the post-party people stumbling home from nearby Khao San Road. By 9am, she’s typically used up the five chickens she preps each day and has packed up shop and headed home to rest after her all-nighter.

Khao man gai (the Thai take on Hainanese chicken rice) is the most basic of breakfast dishes: boiled chicken served atop oily rice that’s been cooked in chicken fat and broth. It’s served with a few slices of cucumbers, a bowl of chicken broth, and a generous serving of chili sauce on the side. With such little variation in the dish, determining which stall serves the best version comes down to recognising the subtle differences of each vendor’s cooking methods.

At Maem Khao Man Gai, it’s the quality of the chicken, the pick of the cucumbers, and the texture of the rice that sets owner Maem apart from all the other early-morning breakfast spots.

“Her rice is less oily than some places,” explains Soon, my Urban Adventures tour guide for the day. Maem’s shop is Soon’s favourite place in the city for khao man gai, and over a shared plate between the two of us, she points out to me the subtleties that make Maem’s version the best: Thai cucumbers instead of the larger English style, rice that is neither too dry nor too oily, and chicken sourced from the nearby province of Nakhon Pathom, which is known for its farming (Maem has her chickens delivered straight from the farm to her house).

Maem isn’t the original owner of the stall; it used to belong to her mother, who had been cooking khao man gai in this same spot for some 20 years. Her mother’s decision to cook a Chinese-inspired dish was a natural one — Maem’s grandparents had emigrated from China to Thailand, penniless and in search of employment and new opportunities. Funnily enough, for Maem’s mother, that meant making a living by cooking a dish inspired by the culinary traditions of the country her family had left.

Maem’s mother retired eight years ago and passed away shortly thereafter, leaving Maem to take over the business that reflects her family’s lineage — and serving the few locals who know to get here in that tiny early-morning window before she packs up and leaves again.

How to find it: Near Khao San Road, kitty-corner to Wat Bowonniwet Wihan, on Phra Sumen Road at Sip Sam Hang Road. It’s at the foot of the (mostly) pedestrian alleyway just before the bridge.