Blog > This woman helped us find the best pho and banh mi in the world (and can help you, too) 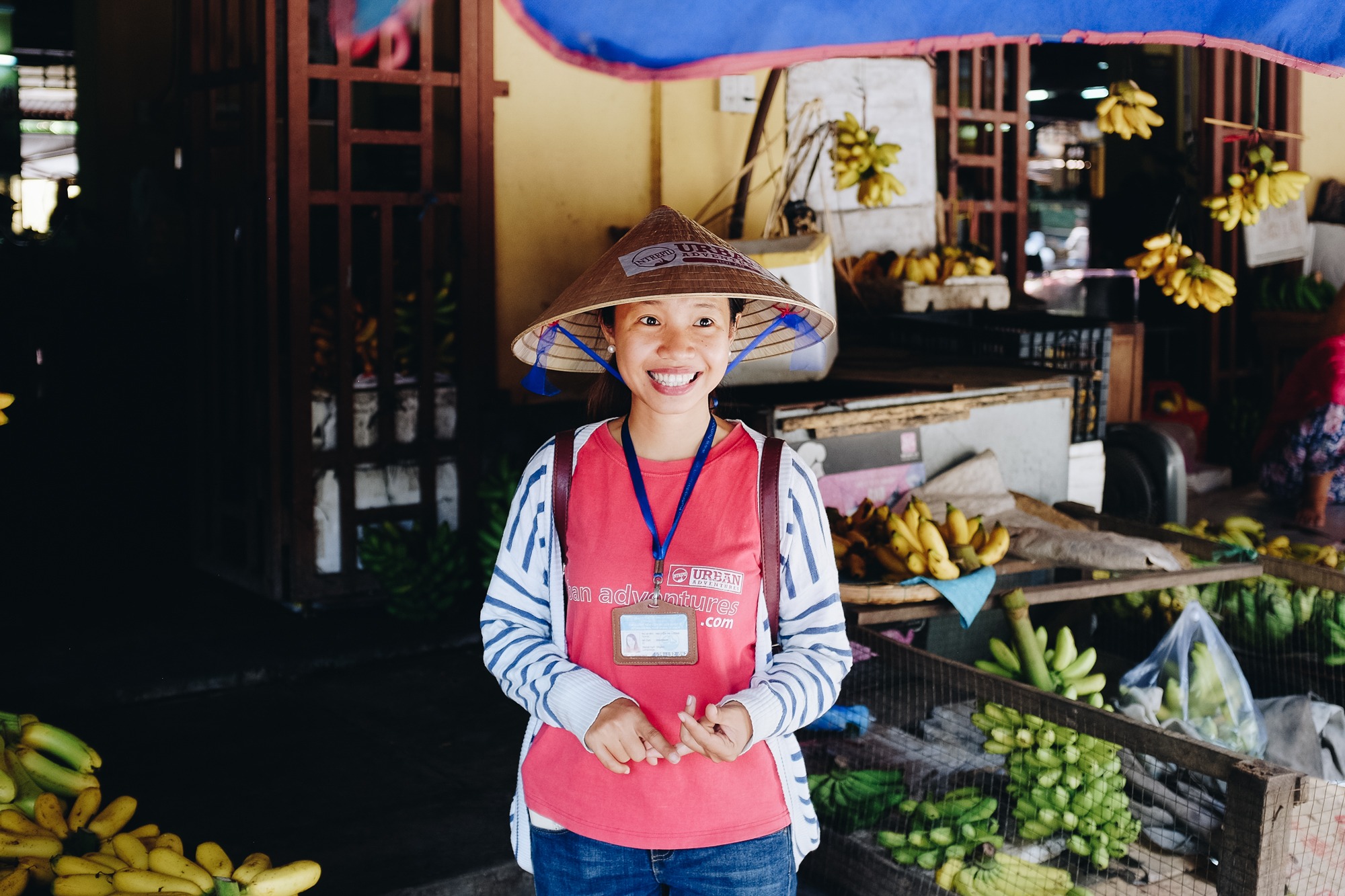 This woman helped us find the best pho and banh mi in the world (and can help you, too)

I’m sweating. Since arriving in Vietnam, in fact, I have been in a state of perpetual perspiration. It’s a hot and humid land, and I am an Englishman not used to such hot and humid lands. But this particular sweat is a unique type of sweat — one induced by pho. And not just any pho, no. I’m in the midst of the best bowl of pho I’ve ever tasted.

Beside me sits Luong, my 25-year-old Urban Adventures guide from the previous day. We’re hanging out now because she wanted to bring me here, to this tiny Anthony Bourdain-approved pho stall in Hoi An’s central market. There isn’t another tourist in sight. It must be obvious by the kind of noises I’m making that this humble bowl of soup is blowing my mind.

“I told you it was good.” She smiles.

Luong grew up close to Hoi An, in Thang Binh district. So she knows the town well. She’s been an Urban Adventures guide here for close to seven months, after spending seven years in Ho Chi Minh (where she studied English language and literature for four years, and worked as a tour guide for three). We’ve got the pho for you | Photo by Oliver Pelling

I keep slurping. I don’t want this meal to end. It doesn’t taste like any other bowl of pho I’ve ever slurped before. The broth tastes more complex and is somehow peppery, hot, and smooth all at the same time. Pickled shallots and peanuts are sprinkled on top. It’s a next level dish, there’s no doubt. And it only cost around AUD 2.

Apparently, American celebrity chef Anthony Bourdain came to this exact stall while filming for his show No Reservations and slurped himself silly. Aside from a photograph of Bourdain pinned to the wall behind the counter, the owner doesn’t seem too fussed about marketing the fact. A couple of tourists enter the market, walk straight past us, and sit at the next stall along. To the untrained eye, all of the stalls in this market are identical. There’s no reason you’d pick one over the other — a fact that makes me all the more thankful for Luong’s expert guidance. The stalls may all look the same, but locals know where to go | Photo by Oliver Pelling

“There’s good banh mi outside too,” she tells me. “That’s where Anthony Bourdain went as well. He enjoyed the bread there — it’s very famous.” In fact, so famous did Banh Mi Phuong become after Bourdain paid a visit, they had to open a new store in the town’s ancient quarter.

“Now, most of the tourists just come to the new restaurant because it’s easy to find,” Luong continues. “Everyone on the internet just recommends the new place; not many people know about the original place. I would recommend them to come to the smaller place to support the lady there.”

Luong moved back to Hoi An after marrying her husband, a high school friend, in Ho Chi Minh City almost a year ago. Their families live just six kilometres apart and they had two huge wedding parties — as is customary for Vietnamese weddings — upon their return. Luong’s family’s party pulled in some 300 people whilst the RSVP list for her husband’s came in at 400.

“This is totally normal,” says Luong with a laugh. “Most families do the same.”

Despite moving back in order to spend time together and with their families, the demands of their respective jobs means Luong and her husband don’t get to see each other too often. The previous month, she told me, they saw each other on just two occasions. They own a house in Da Nang, which is a 45-minute drive north up the coast, but Luong — who works six days a week and often leads two tours a day — tends to stay at her parents’ place near Hoi An as it’s closer to her work. Her husband, a construction engineer, works long hours some 120 kilometres away. This month, however, because the bad weather has meant her husband can’t work as much, they’ve seen each other more. Luong doing what she loves: leading a tour group | Photo by Janna Bennett

Luong admits it’s not an ideal situation, but she loves her job as a guide and she loves showing people Hoi An. “Even after five years, I’ll still want to be a guide,” she tells me. “I have a chance to talk to different people every day. I have friends everywhere in the world and I can learn a lot from them.”

She loves working for Urban Adventures, too. Before becoming a full-time guide, Luong was freelancing for a variety of companies and had no fixed salary and no real support from her employers. “No insurance, no health care, no medical check-up every year — nothing,” she explains. “But [Urban Adventures] has very good benefits.”

Hoi An was largely untouched by what the Vietnamese called ‘The American War.’ It’s a beautiful and well-preserved example of a traditional Vietnamese trading port which, over the years, has seen trade and influence arrive from many parts of the world. The Chinese (Hoi An was the site of the first Chinese settlement in southern Vietnam) and Japanese influences are both the most permeating and most noticeable, but Dutch, Portuguese, Spanish, Filipino, Indonesian, French, British, Thai, and American ships passed through between the 15th and 19th centuries. According to Luong, Hoi An is full of great things to do, eat, and drink. When the weather is good, she likes nothing more than taking a boat ride on the Thu Bon River at sunset. “It’s perfect after a tiring day of walking around town,” she says. “You can talk to the locals and watch them catch fish from the boat.”

She gets her caffeine fix from Café Mia, just a stone’s throw from the market. She recommends a restaurant called Old Garden for cau lao and Ms. Duong — in the market — for the best banh xeo (pork and prawn-stuffed pancakes). For some quiet drinks with the locals, she says there’s nothing better than pulling up a plastic chair and grabbing a cold beer at one of the many riverside carts. That’s my next couple of days in Hoi An sorted then.

It’s easy to look at the volume of tourists in Hoi An — and Vietnam in general — and think about the negative impact all these extra people must be having on the landscapes and towns they visit. But Luong is thankful. Could this be the city’s best banh mi? | Photo by Oliver Pelling

The following day, I find myself sweating again. This time, it’s because I’ve just walked 25 minutes in the scorching Hoi An heat to take Luong up on her recommendation of Banh Mi Phuong. As I take my first bite of the impossibly crunchy pork-stuffed baguette, I become acutely aware that I’m in the midst of the best banh mi I have ever tasted. I email Luong to tell her how much I enjoyed it (I ended up eating two that night).

“I told you it was good,” she replies.

Want to do a food tour with Luong and her team in Vietnam? Hop on a locally led city tour to experience true local life in Hoi An.

Discover the Old Town of Hoi An after the sun has gone down – not only is it the best way to escape the midday heat, it’s also the perfect excuse to dig in to its tasty street food scene!