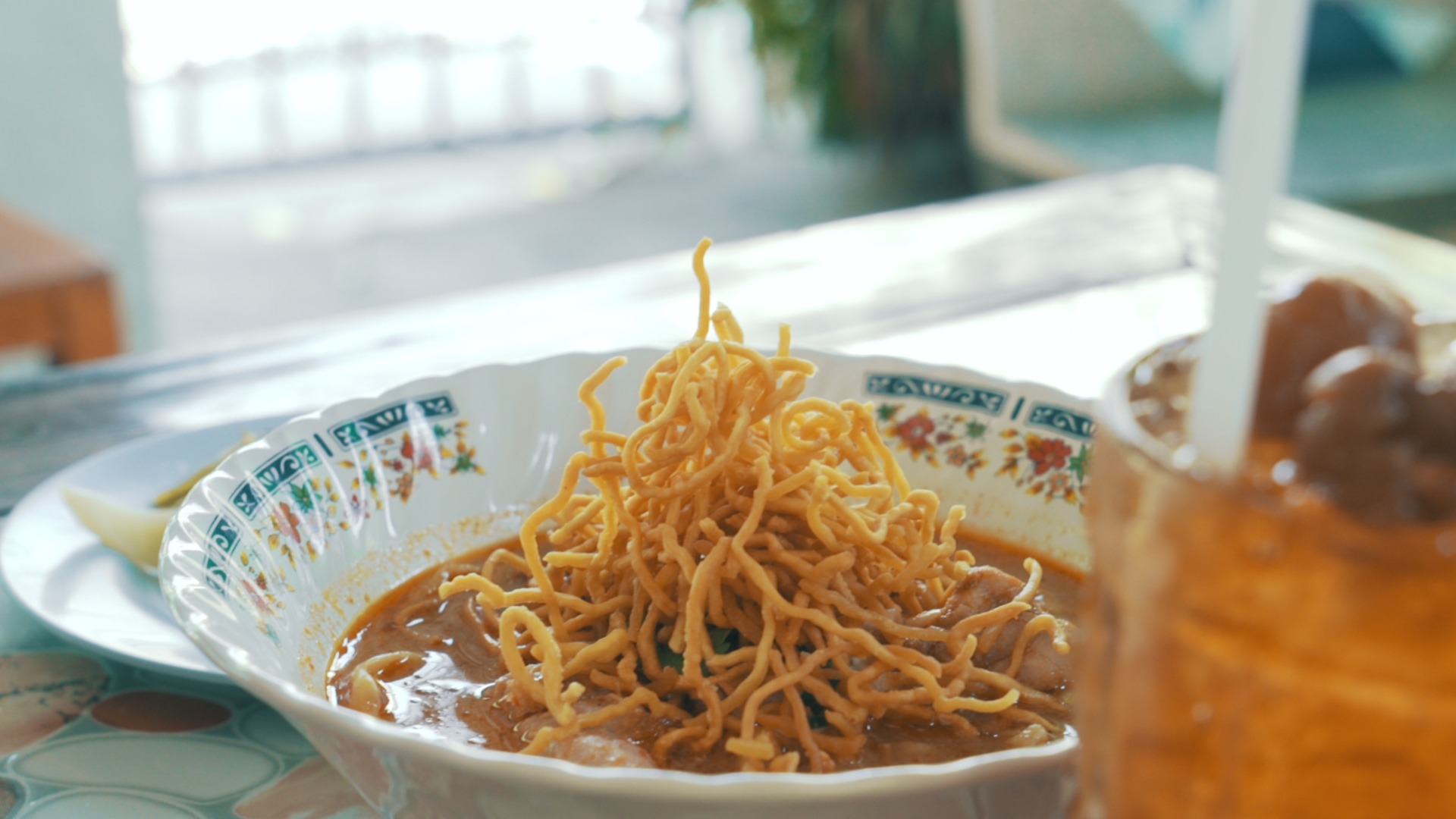 Okay, consider this one a bit of a cheat in our off-the-grid Thailand street food list. This khao soi stall is on every “Best food in Chiang Mai” list on the internet. But it can be notoriously tricky to find if you walk past too fast; located between the temples Wat Rajamontean and Wat Khuan Khama, it’s tucked down a driveway that looks like it leads into one of the temple grounds. If you’re walking from the west, you’ll likely see the tables and stall as you approach, but if you’re coming from the east, it’s easy to walk right past and never realise there are dozens of people slurping noodles just behind you.

Khao soi is the most classic dish of Chiang Mai — you simply can’t come to town and not eat it. Its origins are Burmese with lots of Indian influence, but it has evolved over the years into a distinctly Thai flavour. Creamy coconut milk is mixed with yellow and red curry spices and served over egg noodles. Chicken is the typical protein, although you can also get pork or beef in some shops. But what makes it as pretty as it is tasty is the deep-fried crispy egg noodles served on top, along with some sprigs of cilantro and a side dish of pickled greens, onion, and lime, for you to season to your own tastes. (And for you to craft the perfect Instagram foodie shot.)

Located on the north end of Chiang Mai’s old town, Khao Soi Khun Yai (translation: Grandma’s Khao Soi) is a staple in the city — the kind of place that, yes, is popular with farang (foreigners), but is equally popular with locals. It’s been in this same spot for some 15 years, catering strictly to the breakfast and lunchtime crowd (don’t be surprised if they’re sold out as early as 1pm).

The khao soi is what most people come for, but Khun Yai also makes a mean kanom jeen nam ngiaw — something we’re pretty sure you’ve probably never heard of (and if you have, bravo — you’re a true Thai cuisine connoisseur). It’s typically served at khao soi stalls, although you’re unlikely to see many farang ordering a bowl, even at a place as popular as Khun Yai. This noodle soup dish has a pork-based broth, served with cherry tomatoes, bean sprouts, garlic, coriander, and a few jiggly pieces of chicken blood jelly. It’s lighter than you would expect and a bit tart in taste, and we’d wager it’s unlike any other flavour you’ve encountered in Thailand. So if you want to really go local with your eating habits, pick this dish over the more farang-friendly khao soi. Or just come back again tomorrow and try both. Grandma would approve.

How to find it: On Soi Sri Poom 8, just off Sri Poom Road (north moat, inner road) between Wat Rajamontean and Wat Khuan Khama, in Chiang Mai Old Town. It’s down a driveway that looks like it’s leading into the temple grounds.