Blog > Cocktails, pigs’ feet and a modern man in Hanoi 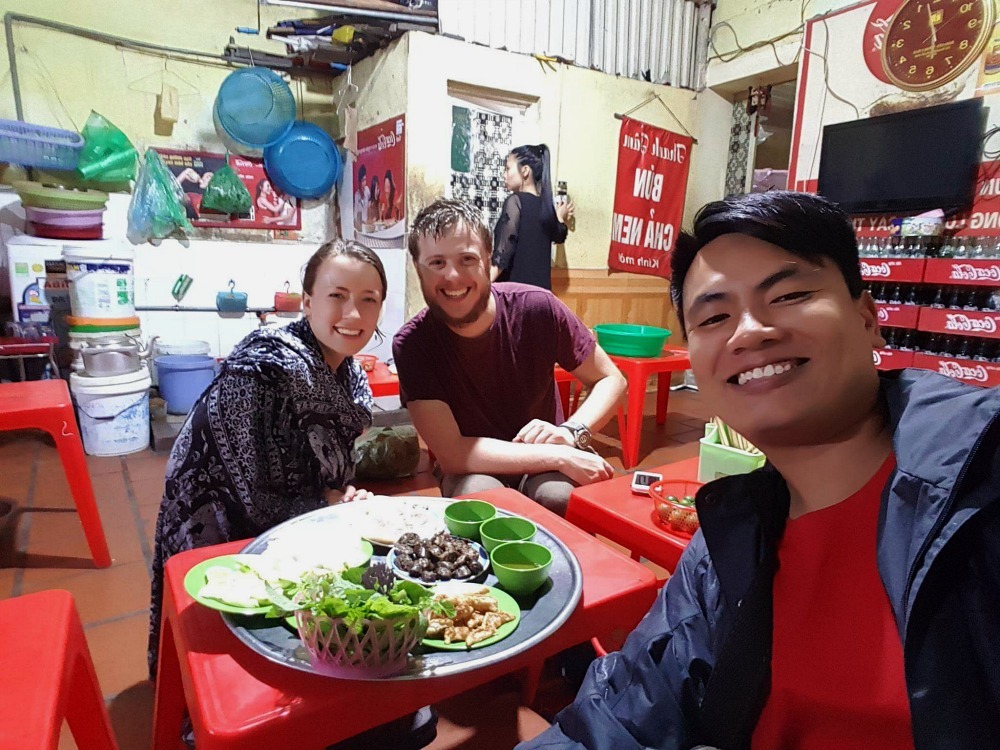 Cocktails, pigs’ feet and a modern man in Hanoi

Late afternoon, the Lake of the Restored Sword, Hanoi, Vietnam. Three days of heat, humidity and sunshine have given way to grey skies and that invisible rain that doesn’t seem to be there until you’re soaking wet. Georgia and I are dashing between raindrops to meet our guide for our Hanoi Sky at Sunset tour.

It may not be the night to see Hanoi at its most beautiful, but we are excited to get under the surface of this city and sample some of the delights it has to offer. Our guide, Chinh, greets us with smiles and bottles of water before leading us to a roof top bar with stunning (sopping) views of the city where we can chat.

While knocking back B52s and cosmopolitans in a high-rise bar might not sound like the most traditional Vietnamese experience, for Chinh and his friends it’s a popular activity.

“The older generation, they don’t really like these drinks,” he tells us over a green mojito. “They prefer the rice wine.”

But for young, relatively affluent Vietnamese, cocktails and nightlife are just as much a part of daily life as they are in the Western world.

Talking to Chinh gives us an interesting perspective; one we’ve not yet encountered in our two weeks in Vietnam. Travelling through the country we have seen mainly rural lifestyles. After all, 70% of workers in Vietnam are farmers. Chinh, however, is most definitely the modern Vietnamese man with a forward-looking attitude.

Cocktails and Chinh | Photo by Jon Oxtoby and Georgia Aspinall

As we finish off our cocktails and head off into the city to find some finger food, Chinh tells us how he came to work for Hanoi Urban Adventures. Chinh’s parents and grandparents worked for the Communist Party, but Chinh chose a different path. He was drawn to tourism because of the opportunities to meet new people, encounter new perspectives on life, and share his culture with others.

The actual decision to work for Urban Adventures came from his wife, who at the time was also working for the company. We found this heartening news; the stereotype of gender roles in Vietnam had painted a picture of hard-working women toiling away to support husbands who often weren’t interested in work, or in being particularly nice to their spouses. It was refreshing to meet a man in Vietnam who was active, engaged and respectful of his wife’s career and opinions.

A bite to eat and a beer

We ducked out of the rain, now looking thoroughly like drowned rats, and into one of those places you see in Vietnam populated by red plastic chairs sponsored by Coca Cola. We’d never really had the courage to order something from one of these places ourselves — we’re suckers for being comforted by a good TripAdvisor review. Chinh ordered us a platter of various snacks to sample as a buffer against the drinks still to come. On the menu: pigs’ feet (tasty!) tofu (weird but still good), and shrimp paste (sadly not to our taste), among other things. Bellies full, we journeyed on to the nearest equivalent to a pub where again we perched on our plastic chairs — blue this time — and sampled the local beer.

“On the menu: pigs’ feet (tasty!) tofu (weird but still good), and shrimp paste (sadly not to our taste)” | Photo by Jon Oxtoby and Georgia Aspinall

The establishment was one of the busiest we had been in. It was full of men of all ages, clearly enjoying a few bevvies after work — something we’re partial to, too. The only unusual thing from our perspective: the total lack of women, bar one other tourist. While we drank, we chatted easily with Chinh, learning more about the lifestyles of people in this capital city.

We had a good-natured argument about the merits of iPhones vs. Android and Windows phones, and Chinh explained to us just how important it is in Vietnam to be seen with the latest and greatest technology. Although he hasn’t succumbed to the demand yet, he has friends who have paid over $1,000 for a secondhand iPhone — just to be seen with Apple technology.

He surprised us again when Chinh, having found out that Georgia was a teacher, told us in no uncertain terms that his children weren’t going to be educated in the same way that he was. High pressure, long hours and enormous expectations are the norm in many Asian countries, but Chinh instead hopes his children will have time to play, and simply be children. He admits his opinions are unusual in Vietnam, even among his friends, but he sticks to them.

The joy of travelling

We got to know Chinh even more at the last two stops of the night, sampling a range of flavoured rice wines and then drinks at a cocktail bar where they know how to put on a show (we won’t spoil the surprise!). While the drinks were delicious, what delighted us the most was meeting a guide who not only gives his guests a great experience but has obviously been so influenced by them in return.

The writers and Chinh, making friends in Hanoi | Photo by Jon Oxtoby and Georgia Aspinall

In a country of rigid government policies and strong traditional values, it is amazing to meet someone so open to new ideas. Chinh told us how much he loves his job as a chance to encounter different attitudes from people all over the world. In helping tourists to understand Vietnam and what it’s like to live there, he is also helping to generate a modern, open culture in Hanoi — which can only be a good thing.

As we made our (slightly wobbly) way home from our last bar, we reflected on what a lovely evening we’d had. The cocktails, food and places we saw were interesting and fun in themselves. But, as with our previous Urban Adventures experience in Delhi, it was the tour guide that turned this from a good evening into a great one. His friendly nature, and his willingness to talk about his country and help us understand it, made this a night we’d thoroughly recommend to anyone in Hanoi.

Want to experience this Hanoi cocktail adventure for yourself? Join Chinh or one of our other awesome Hanoi guides for the Hanoi Sky at Sunset tour.

Immerse yourself in the hustle and bustle of Hanoi’s Old Quarter at sunset with a local showing you the way. Join us on a voyage of discovery where we will unearth the best cocktails, Bia Hoi, authentic Vietnamese wine and street food in town and introduce you to some delightful people along the way.