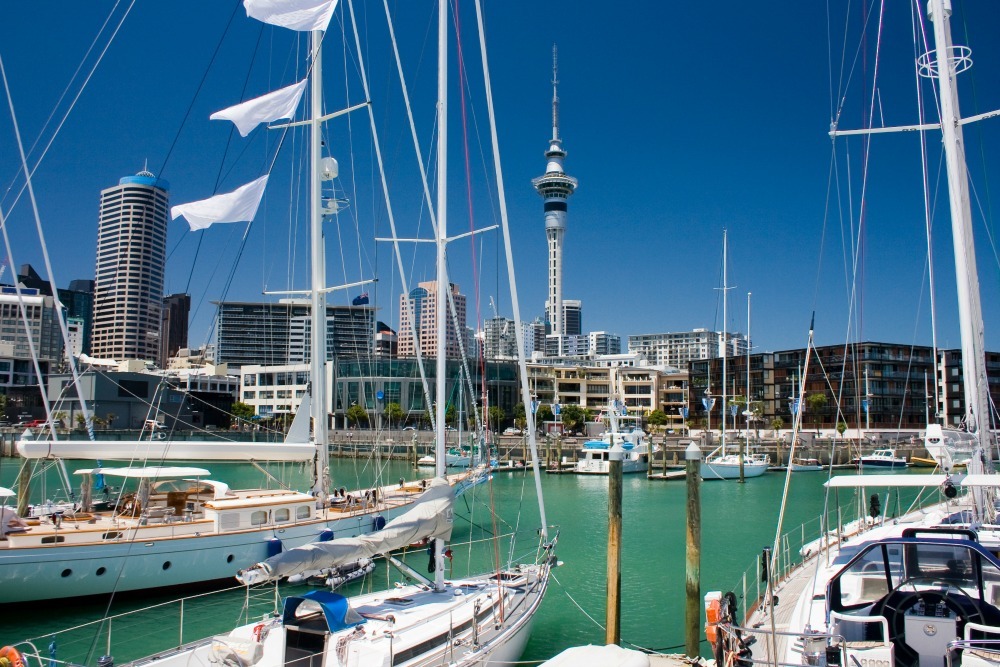 The complete guide to: Auckland travel

New Zealand’s largest city offers the perfect mix of urban and outdoor activities. Whether you want to shop and museum-hop, or hike and hit the beach, you can easily do it all in Auckland. No matter when you’re going or why, use our complete guide for everything you need to know about a trip to this multifaceted city.

Getting to and from AKL

The easiest way to get to and from Auckland Airport is via the convenient SkyBus. Buses leave from the international terminal and make a second stop at the domestic terminal before continuing to the city. The ride gets you to the SkyBus Hub at 396 Queen Street, where you can hop on a complimentary shuttle to all the way to lower downtown. You can also use the shuttle to get from lower downtown to the SkyBus hub for a ride back to the airport. The ride should take between 40 to 60 minutes, depending on traffic, and a one-way fare is NZD 18. SkyBus operates 24 hours a day, 365 days a year.

A taxi into the city centre will cost about NZD 75 to 90 and can take up to an hour during peak traffic times. You’ll find taxi stands outside the arrivals area (door 8) at the international terminal and outside the Jetstar forecourt at the domestic terminal.

Things to do in Auckland

Rugby is the national sport of New Zealand, so if you’re going to be in Auckland and the timing works out, why not catch a game?! Eden Park is where the famous All Blacks play and tickets start at NZD 20. You can buy tickets online from the team’s ticket box office or at the gate (unless the game is sold out).

Something else to make a point of adding to your Auckland itinerary is the Auckland Art Gallery Toi o Tāmaki, the largest art institution in New Zealand. The gallery’s collection of over 15,000 works includes historic, modern, and contemporary New Zealand art, as well as work by Māori and Pacific Island artists. “Toi o Tāmaki” translates from the Māori language to English as “the art of Auckland.” Entrance to the gallery is free, but some exhibitions may cost extra.

Another must-do in Auckland is the Sky Tower for panoramic views over Auckland from 220 metres above street level. Or if you’re feeling daring, you can also bungee jump, which has you falling 192 metres straight down! The area around Sky Tower is also home to over 20 bars and restaurants. Other attractions to add to your list include the Auckland War Memorial Museum, Auckland’s bustling Wynyard Quarter for shopping and dining, and Mission Bay for the beautiful white sand beach.

Auckland on the big screen

Okay, so you probably already know to watch the Lord of the Rings trilogy if you want to see New Zealand’s epic scenery, but if you want to get deeper into the actual culture and people, we recommend the movies Boy and Hunt for the Wilderpeople, both written and directed by New Zealand filmmaker Taika Waititi.

Auckland is known for its diverse music scene, so it’s hard to pin down one specific artist, but the soundtrack to the aforementioned movie, Boy, features music by exclusively New Zealand artists, so that might a good one to get you in the mood for your visit.

Get ready for your trip to Auckland by reading Stonedogs by Tony Marriner, which won the Deutz medal for fiction at the 2002 Montana Book Awards and shows a side to New Zealand society that you might not expect — namely drugs, gangs, and violence. Another one to pick up would be The Penguin History of New Zealand by the late Michael King, to get an overview of the history of New Zealand. The book focuses on the Māori-Pakeha settlers and explores the shaping of the country’s ecology, society, cultures, politics, and economics.

A Simple Guide to Thai Temple Etiquette
Lonely Planet Best in Travel 2020: What not to miss according to locals
Best street food in Sydney: Great Aunty Three
Things to do in Budapest at Christmas
A Guide to Zagreb’s Christmas Markets