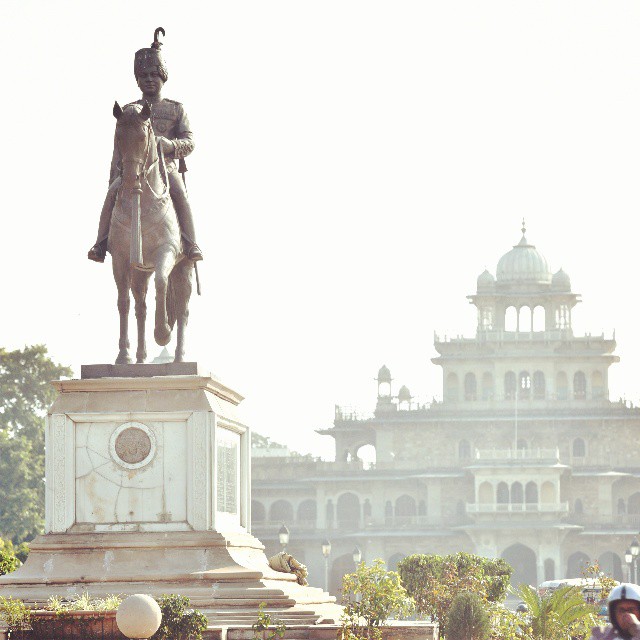 The complete guide to: Jaipur travel

Jaipur, Rajasthan’s capital, is part of India’s Golden Triangle circuit along with Delhi and Agra. Dubbed the Pink City because of the pink walls and buildings of the Old City, Jaipur is filled with historic attractions, myriad bazaars, temples, palaces, museums, and gardens — so there’s no shortage of things to see and do here. If you’re planning a trip, take a look through our guide,  for getting there, getting around, and some of the best things to add to your Jaipur itinerary.

Getting to and from JAI

Jaipur International Airport is about 12 kilometres southeast of the city, and the best way to get yourself into town is via prepaid taxi. The trip takes 30 to 45 minutes and will cost at least 450 INR. There’s a prepaid taxi booth inside the terminal.

The best way to get around Jaipur depends on what you’re doing and where you’ll be. The Old City is well laid out and its many sights and shopping areas aren’t too far apart, making getting around on foot your best option. If you do get tired, you can hop a cycle rickshaw, which are ideal for short distances. A quick trip shouldn’t cost more than 12 INR (but you’ll likely need to bargain).

Another option for getting around the rest of the city is by taking the bus. Low floor buses operated by Jaipur City Transport Service Limited (JCTSL) crisscross the city via a number of routes and run between 6:30am and 10pm. Fares depend on how far you’re travelling, but expect to pay between 8 and 25 INR.

Autorickshaws are another option for getting from A to B and since they’re so plentiful, finding one shouldn’t be a problem. This is probably your best bet for getting to Amber Fort since it lies outside the city; a return trip should cost between 350 to 400 INR.

Things to do in Jaipur

Start your sightseeing in Jaipur in the Old City, where you’ll find some of the city’s most significant landmarks, bazaars, and palaces. City Palace is smack in the centre of the Old City. This is a huge complex comprised of ornate gates (each representing a different season), courtyards, buildings, and gardens. Take your time exploring and snapping pictures — there are plenty of photo ops in and around the palace alone.

You’ll also want to make sure to see Hawa Mahal, the city’s most famous landmark. The honeycomb-looking structure, know as ‘the Palace of Winds,’ was built in 1799 and has 953 windows on the outside walls. The purpose of the windows was to allow ladies of the palace to watch the outside world without being seen.

You’ll also find many of Jaipur’s bazaars inside the walls of the Old City, each focused on specific types of items, from fabric to jewellery. Nehru Bazaar and Bapu Bazaar, for example, sell mainly shoes, brightly hued fabric, local perfumes, and saris. Johari Bazaar is mostly dedicated to jewellery of all kinds, while Kishanpole Bazaar has more of a focus on decorative items and wooden furniture. Simply browse to hang out among locals, or shop for some souvenirs to take home.

Before leaving the Old City, make a stop to look at Jantar Mantar, an astronomical observation site built in the early 18th century and now a UNESCO World Heritage site. To learn more about how the giant structure works, it’s a good idea to hire a guide.

Amber Fort is located outside of the city, but well worth a visit for its beauty and sheer size. The palace complex has four main sections each with its own courtyard — so there’s plenty to see. It’s a trek to get to the fort, but the views once you arrive make it worth it. The other option is a return 4WD ride, but that will run you around 40 INR.

Avid readers, take note: Every year in January, Jaipur hosts the Jaipur Literary Festival, which also happens to be the world’s largest free event of its kind. Authors and speakers come in from all over the world ranging from up and coming authors, to Man Booker Prize winners. Some names you might recognise from past festivals include Salman Rushdie, Stephen Fry, Oprah Winfrey, and Pico Iyer.

Jaipur on the big screen

Of course, you can’t take a trip to India with out brushing up on your Bollywood, and blockbusters Mughal-E-Azam and Sabse Bada Khiladi were both shot in Jaipur. Other good options for pre-trip viewing include thrillers Sonar Kella and Bhool Bhulaiyaa, and action flick Veer, all also filmed in Jaipur.

Get in the mood for a trip to Jaipur by listening to the traditional folk music of Rajasthan.