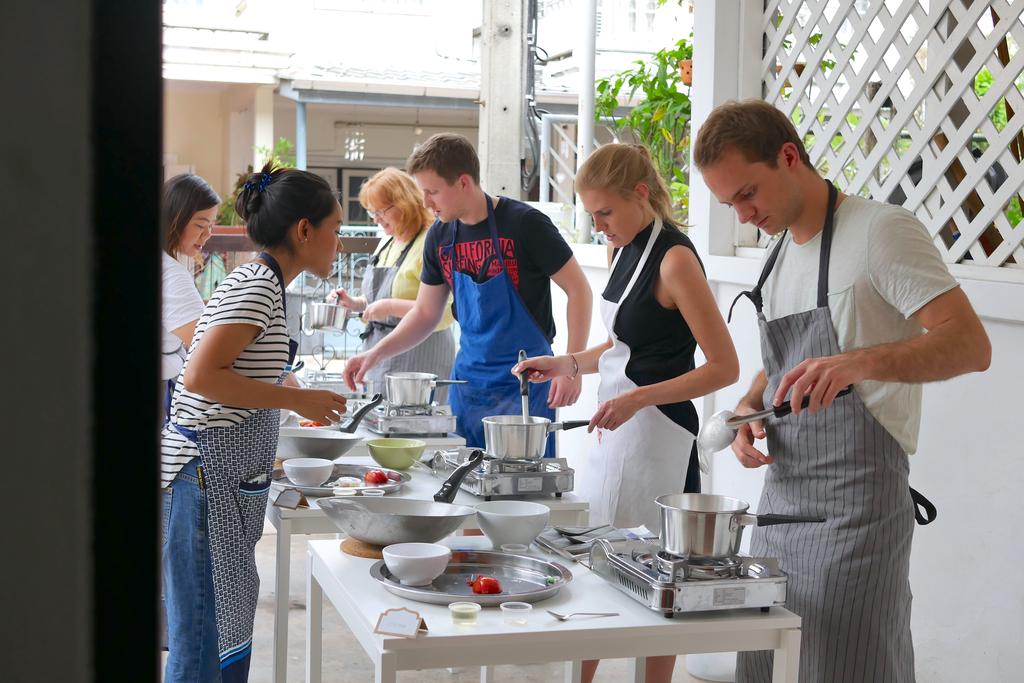 I visited Bangkok because I had to.

I was headed to Chiang Mai and since it was my first time in Thailand, I thought it was silly to not at least stop by.

Being from New York City, I should have known better. I had imagined Bangkok filled with tourists, hippies and party drinkers. Spending most of my first day on Khao San Road only confirmed that. But, just like people who come to NYC and never bother to leave the Times Square area, I made assumptions about an entire city based on one neighbourhood. Shame on me.

My second day in Bangkok, I took a taxi over to the house where our Courageous Kitchen cooking class takes place (part of our In Focus line-up of tours, which are run by local non-profits). And wow, was it a different Bangkok. The sun was shining on quiet, fruit-tree-lined streets, where modest homes lined either side, each with a garden or outdoor sitting space.

I was greeted by my host and Courageous Kitchen founder, Dwight (who’s home I was in). He showed me around the bright and airy traditional house (the biggest thing was to explain how the old-school manual-flush toilet worked). I learned a bit more about why he started the program and why the cooking class was such an important part of it — it gives his students a place to practice their cooking skills and English.

The program helps youth from refugee families who are at risk of poverty, malnutrition, poor education and exploitation. Through the hands-on classroom, the program educates on basic food safety, cooking and nutrition but also fosters confidence and leadership in a safe space.

Which is hard to come by if you’re a refugee.

As a privileged American, I was nervous as we awaited my local guide (a young woman who had gone through Dwight’s cooking program). How horrible was her past? Would it be weird if I didn’t acknowledge it?

She arrived, with one of the young women still in the program in tow, and Dwight introduced us (I’m omitting her name for her own safety), explaining that she’d take me to the local market to buy ingredients for what we were making that day.

She was shy and obviously a bit self-conscious about her English (which was great), and our walk to the market was quiet. I did my best to smile a lot and speak clearly when I had a question.

Once we got to the market, we had more to talk about and I relaxed. She pointed out different fruits and asked if there were any I had never seen before that I wanted to try. She explained each traditional ingredient as we bought it, answering my questions about traditional Thai cooking, sources of ingredients and how to pick out the super spicy chilis from the regular ones.

Back at the house, I relaxed even more as we started to cook. My guide had shared with me that she wanted to be a chef and she had a wonderful professionalism even in the casual setting of the house. She instructed me right away on how to hold the knife properly when she realised I had no clue, and was amused by my immense excitement at the flower tea we made — it went from bright blue to bright purple after adding lime! And she got VERY excited when she found out I had a husky dog at home.

We cooked alongside one another — she first showing me what to do in her pot, and then watching over me as I did the same in mine. As we finished each course, we sat down to eat together. And that was the truly special part.

There’s nothing quite as intimate as sharing a meal with someone. We chatted, got to know one another, and enjoyed the meal we had made.

I choose not to tell her full backstory here because I don’t want you to think of her as a ‘refugee’ with a hard past. Having to leave Vietnam with her family due to religious persecution certainly created her path, but I don’t think it should define who she chooses to be moving forward.

What was more shocking to me than her past was what her life was like at that exact moment. What looked like a nice home to live in to me was, in reality, a space for her to feel safe (even when refugees are waiting for their processing to finish, they are susceptible to being picked off the street by police who can tell they’re not Thai, and jailed until someone can come up with bail). And the future of her promising cooking skills are, in reality, totally dependent on whether she can get legal permission to live and work somewhere. Anywhere.

I felt privileged to spend an afternoon with her.

Here’s what I do want you to know about my guide:

I highly recommend heading out of the craziness of mainstream Bangkok to learn to cook from these young women. Their strength and persistence was an honour to take in, even if just over a meal, and by the end of the day, you realise they’re just ‘regular’ young women like you and me.

Curious what we ate? The class is flexible, so let them know if you have any special Thai requests you’d like to learn. They love it when you’re open to trying something besides pad Thai (but they’re really good at that, too). We had tom kha soup, cashew chicken (the best I’ve ever had. Ever.) and an amazing ‘gnocchi’-esq dessert cooked in sweet coconut milk. Plus that cool flower tea.

Your guide will meet you and take you to a quaint little market where you’ll be introduced to the most important ingredients in Thai cuisine. We’ll pick up what we need for our cookery class and chat to some local vendors along the way.