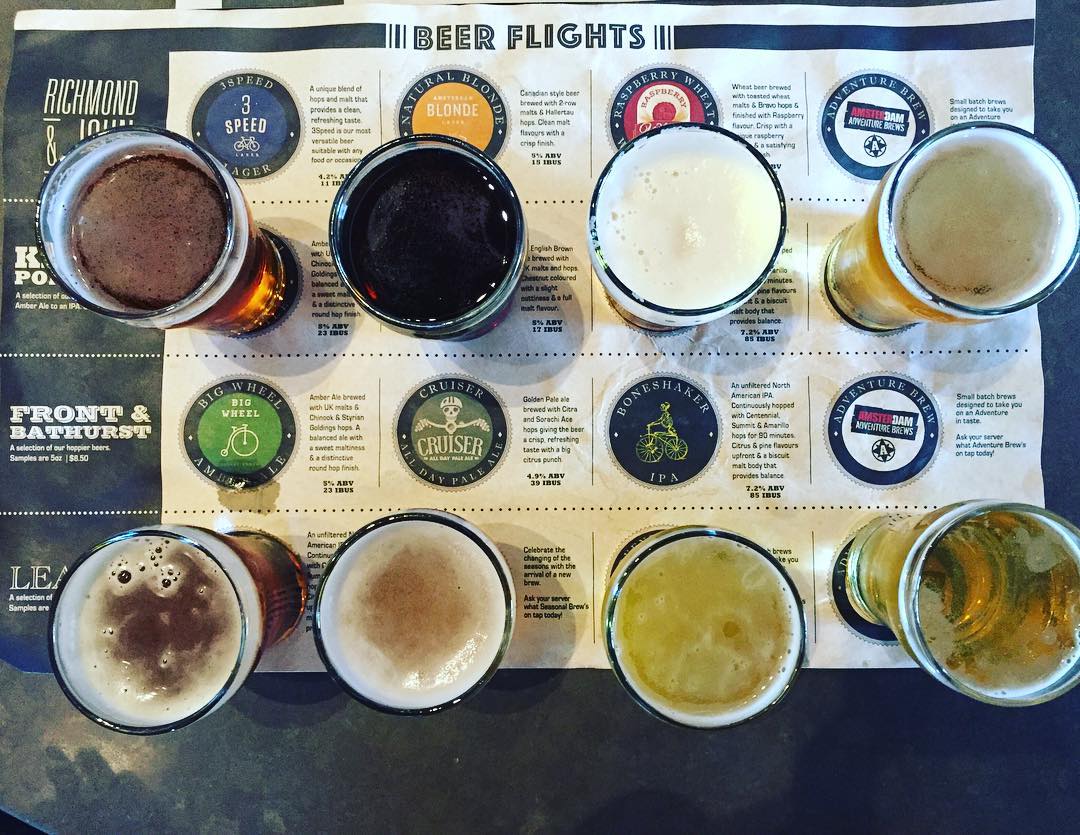 When it comes to beer in Toronto, let’s just say that locals take their brews seriously. Very seriously. With microbreweries and craft beer bars popping up all over the city, it might take you a few days of imbibing to find the best of the best (not that that’s a bad thing). But if you’ve got limited time to find the favourites, and as your local experts on all things beer, we at Toronto Urban Adventures thought we’d recommend our top five beer destinations for locals and visitors alike. From the west through the downtown core to the east end of Toronto, we’ve selected five fantastic purveyors of local lagers and ales that will keep your glass full and make sure you’re having the #BestDayEver here in Toronto!

612 College Street. Formerly Bar Volo on Yonge Street, this 28-year staple of Toronto’s craft beer community had to pack up shop in late 2016 due to a condominium development. Thankfully, local beer lovers’ fears were soothed when they discovered Volo wasn’t closing down for good, just relocating to the Little Italy district. Family-owned and operated, Bar Volo was known for its a wide range of rotating small batch Canadian brews, as well as finer selections from Europe and America. The new Birreria Volo continues to carry the eclectic mix of beers it was always famous for, although now with a bigger focus on barrel-aged brews and saisons. Locals know that the old Bar Volo held some of the best beer events in the city, such as Zwanze Day/Funk Night (which paired the release of one of the rarest beers in the world from Cantillon with an all-sour beer tap takeover set to funk music), and are eagerly awaiting to see what fun surprises the new Birreria Volo will have on tap.

245 Queens Quay West. Conveniently located near many hotels in the downtown, in addition to major transit hubs, the Amsterdam BrewHouse might just be the best brewpub in Toronto. Owned and operated by Amsterdam Brewery (who are Toronto’s original craft brewery, launching in 1986) since 2013, the Amsterdam BrewHouse has expanded its already large space to accommodate over 1,000 guests at a time, with a significant amount of those seats being found on the best and biggest lakeside patio in the city. The brewing team at Amsterdam is constantly offering up a brilliant selection of small batch brews that include sours, goses, saisons, and radlers in addition to their main brews (including the inimitable Boneshaker IPA), with pints and sample flights available. Most importantly, the food at Amsterdam BrewHouse nearly rivals the quality of their beers — a refreshing change from brewpubs that focus too much on beer and let food quality suffer.

391 King Street West & 137 Peter Street. Barhop on King has been a rising star in the craft beer scene in Toronto ever since it opened in 2012, leading to the opening of a second, three-storey location on Peter Street in 2015. Whether you’re lucky enough to get a spot at the King Street location or are enjoying some sun on the Peter Street rooftop patio, you’re in for a treat. Barhop’s owners and staff are some of the most well-connected slingers of suds that you’ll find anywhere in Toronto, leading to a largely Canadian rotation of small batch brews. Typically Barhop has about 36 of these on tap at any given time, and it’s a great mixture of staff favourites and brand-new brews, many of which Barhop’s staff have collaborated on themselves (for example, the delectable peanut butter and chocolate-flavoured “Sweet Zombie Jesus”, made with Great Lakes Brewery). Keep an eye out for their many tap takeovers and beer events, as they’re usually some of the most coveted beer tickets in the city.

1181 Dundas Street West. If you find yourself in Toronto’s trendy downtown west end, you’ll want to visit Get Well should you be in need of some malty refreshment. Boasting one of the biggest craft beer selections in an area full of top-tier bars and restaurants, there’s a lot to love about Get Well. The rotating taps constantly feature new and interesting brews from many of Ontario’s best breweries, while the fridge is always stocked with unique and interesting cans and bottles of beer from all over the world. Get Well even used to make their own beer in the back before they decided to reclaim the space to put in a North of Brooklyn Pizza franchise, one of the city’s best quick pizza slices. To top it all off, Get Well has dozens of classic arcade and pinball machines that are completely free of charge to customers. Opening at 4pm daily, Get Well functions more as an evening drinking spot, and be warned that the crowds on weekends can get quite big, but Get Well is popular for a reason — it’s one of the best and most fun craft beer bars in Toronto.

972 Danforth Avenue. If you’re looking for beer in the east end of Toronto, this might be the only place you have to visit. With over 230 beers in the fridge and over 25 rotating beers on tap, The Only Cafe has specialised in delicious and unique beers for over 30 years and have a team of knowledgeable bar staff that can guide you to your next new favourite beer. Their back patio is a much beloved and coveted drinking spot, and the eclectic decorations and paintings in the front room should provide lots of conversation for you and your group. Only Cafe regulars also know to check out their annual summer beerfest, where some of the best breweries in Ontario take over their back patio to offer free samples of their latest recipes.

Throughout its history, from the early 1800s, when Toronto was known as “York” to the modern metropolis it is today, the citizens of this city have used beer for refreshment and merrymaking. This Toronto beer tour is a historic walk through the streets of the old Toronto and an introduction to Canadian beer all rolled into one.