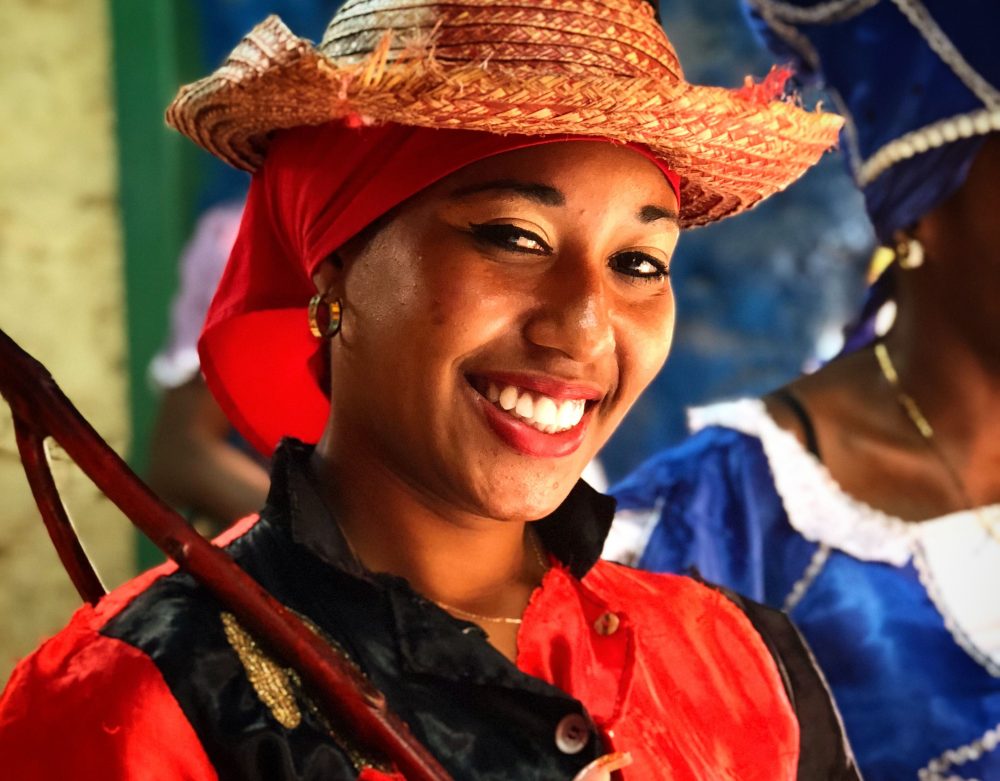 Cuba’s Afro-Cuban religion is a colourful mix of local customs, folklore and beliefs, with roots in African-derived religious practices. As a result of colonialism, these practices went through a long process of adaption, as millions of African slaves were brought to Cuba to work at the sugar cane, tobacco and coffee plantations.

Santería, or Ifá-Ocha Rule, derives from the original practices of Yoruba Tribes in Nigeria and is the most popular religious practice among Cubans. Slaves were forced to become Christians as a means of control; however, they managed to hide representations of their own Orishas (spirits) behind the images of Catholic saints. For centuries these Orishas have been passed down generations. The characters were real life people in ancient times and they had their own preference for food, drink, flowers and herbs, which are offered accordingly.

Celebrations of Orishas or Saint’s Days are popular festivities where practitioners will usually go to church to pray to Catholic saints, offer flowers and light candles, invoke their Orishas at their alters at home, and go to outdoor spaces to make offerings.

When celebrating at home, Cubans usually start in the evening, playing drums, singing, dancing and sharing food and drink for 24 to 48 hours non-stop. During ceremonies, specific colours and symbols representing each saint are combined with special rhythms and songs to invoke that saint. In addition to these rituals, devotees will occasionally make special pilgrimages.

Some of the most popular celebrations that are celebrated today include:

A celebration to Yemayá, Goddess of the ocean, mother of nature and symbol of maternity takes place on September 7. The colours for this celebration are blue and white, which represent the undulating movement of waves as Yemayá dances. On this day people offer fruits (preferably watermelon) and flowers to the sea. Devotees will also make a pilgrimage to pray to Yemayá at a Catholic church in the local community of Regla, Havana.

The celebration of Oshun, Goddess of Love, fertility and sensuality takes place on September 8. According to legend, when Oshun dances, it seduces men. The celebration is linked to the elements of gold, copper and bronze and to Cuba’s patron saint, Virgen de La Caridad. On this day, people go to the river to offer her flowers and pumpkins. Rituals include using honey, perfume and cascarilla (a special powder made of egg shells) to “clean the body” and solve emotional situations. Devotees will also visit the local catholic church where Mexican Mariachi-style music will play to honour her. Devotees to Oshun make long pilgrimages from all over the country to the church at El Cobre in Santiago de Cuba to pray to her.

Ruling our head and white metals, Obatalá is celebrated on September 24. Considered to be father of all the Orishas, this deity provides us with intelligence and emotional stability and is the symbol of purity. During the process of initiation people wear white for a whole year, wrap their heads and wear a white umbrella to protect their head from the sunlight and from the rain.

On October 4, Cubans celebrate Orula, God of divination, wisdom, witness of the whole creation. This God is the one invoked by the Babalawo (priest) to predict people’s past, present and future. Orula is depicted by green and yellow and shares its celebration with San Francisco de Asis.

God of fire, lightning and consecrated drums, Shango is celebrated on December 4. This God is represented as a king and a brave warrior, a handsome man seducing women. The celebration is shared with Santa Bárbara. On this day, drums are played by men during the celebrations.

December 17 is a celebration of Babalú-Ayé, who protects the immune system, cures skin problems, broken bones or contagious diseases. The celebration is shared with San Lázaro and the colour purple. There is a very popular church in Havana far from the city centre, where devotees make their sacrifices and promises on this day. Devotees will make their pilgrimage without shoes, or will wear clothing made of purple burlap.

Learn more about the history and traditions of Santería on our Afro-Cuban Religion tour in Havana.