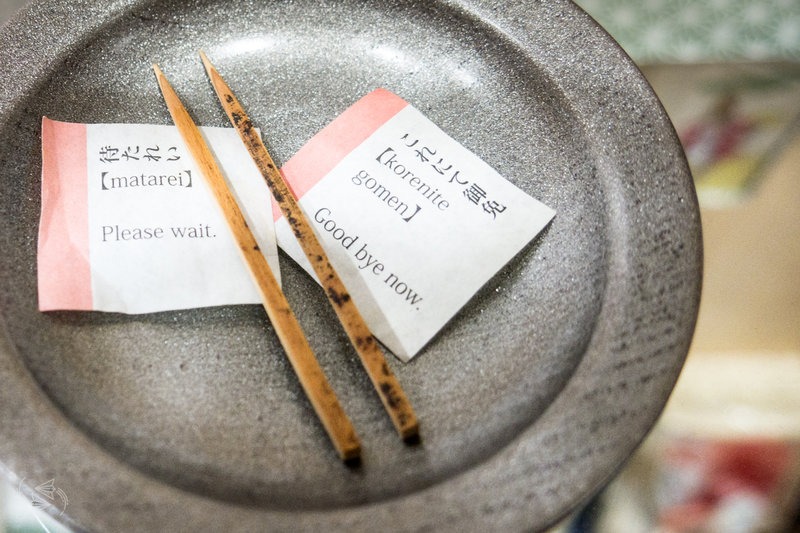 It was a late autumn afternoon and a light drizzle had started to fall, just enough to warrant opening my umbrella. I was early and found a spot off to the side of the pavement, right next to the mechanical clock tower, the meeting point for my Made In Japan tour in the residential Tokyo neighbourhood of Ningyocho.

I pulled out my camera to take a shot of this rather unusual structure, reminiscent of a former time. As I stood there, precariously balancing my umbrella with one shoulder and arm while I played with the settings on my camera, a local man came up and said hello, asked me where I was from and wished me a good day.

Even when I put my “biggish” camera away, an accessory that often attracts some attention in an age when most people use their smartphones as cameras, my non-Japanese appearance seemed to garner the curiosity of passersby who stared by way of elongated sidewards glances. Even though I was a mere minutes from downtown, it was clear I had entered a very different part of Tokyo, where life was continuing in a more low-key way and where the spotting of a foreign tourist was still a rather unusual occurrence.

Our tour started with the viewing of the clock tower’s hourly performance, where puppets appear and twirl around, giving a short narration of the history of the local area. Visitors who don’t understand Japanese would miss this interesting introduction, but on this tour I had the benefit of an English-speaking guide to explain Ningyocho’s early beginnings. Literally meaning ‘Doll’s Town,’ Ningyocho’s history dates back to the Edo Period when it was developed as an entertainment district centered on kabuki theatre and puppetry.

After the display, our guide and long-term Tokyo resident, Kimiko, kicked off the tour by taking us to our first stop, a ningyoyaki (‘grilled dolls’) shop. Kimiko assures us that no dolls were injured in the making of them and that these were in fact red bean-filled battered sweets imprinted with the faces of the Seven Gods of Good Fortune. There are shrines dedicated to each one of them in the area, two of which we would visit on the tour.

This small shop is 110 years old and run by a father and son: Fujii Yoshimi and Yoshito. We met both of them on our visit, the father greeting and serving customers, while the son continued to fill the cast iron molds with batter and red bean out the back, using the original equipment from the days when the shop opened more than a century ago.

They make anywhere between 1,500 to 2,000 ningyoyaki a day and simply shut up shop when they are sold out. Seeing my intent curiosity as I watched his son turn out perfectly cooked treats, the father joked about me trying it too. I would definitely love to be an apprentice here!

Watch to see what treasures you can find on a Made In tour in Tokyo!

As we stepped outside of the shop, Kimiko handed us each a freshly cooked ningyoyaki to try, still warm to the touch. The faces were random and I was pleased to learn that mine had the face of the only female god amongst the Seven Gods of Good Fortune, and that she represented beauty and knowledge. I took it as an ancient nod of recognition to women’s intellectuality having equal standing.

Matching up my ningyoyaki with the faces of the Seven Gods of Good Fortune outside the store. That’s mine in the middle! | Photo by Jessica Korteman

As we ate our snack, a nearby Japanese man seemed surprised to see foreigners enjoying red bean. “Can people from Western countries eat red bean?” He asked, giving a baffled shrug as if to say, ‘you learn something new every day,’ which made us all smile.

We would visit a number of stores on our walking tour, some food shops and others selling knick-knacks or custom goods. One thing they all had in common, however, was the fact they were local and unique. Each one had a different story and gave us the opportunity to see and buy products direct from local artisans, rather than big chain stores.

A shop selling croquettes, a common snack in Japan. I tried the sukiyaki beef flavour since Ningyocho is well known for the dish. | Photo by Jessica Korteman

An unexpected highlight for me was a visit to the handmade toothpick store. Have you ever thought about buying reusable toothpicks? No, me neither. But I was instantly transfixed by this art that I hadn’t even known existed until a few moments earlier.

Beautiful toothpicks have been handcrafted at the store from the branches of the kuromoji, or black willow, for more than 300 years. The toothpicks can be cleaned and reused again and again, and you can even get gorgeous boxes and small pouches to store and carry them around in.

Wouldn’t this make a unique gift? Five handmade reusable toothpicks in their own pouch. | Photo by Jessica Korteman

Sadly, despite the rich tradition around us, one thing that was clear was that Ningyocho and the surrounding Nihombashi area is changing. Many of the local artisan shops won’t be there forever, as traditional arts struggle to survive.

“I’m glad you’re getting to see this now, before it changes too much,” Kimiko said several times throughout the tour.

It’s these kinds of tour activities that have benefits for both sides, I think. The more interest there is in people buying local artisan products, the longer the artisans are likely to preserve them, and the visitor can in turn walk away with unique, ethically sourced souvenirs plus an authentic backstreet Tokyo experience that many people would simply walk on past — if they didn’t have a knowledgeable guide.

I’ve spent eight years in Tokyo, and it takes a lot to surprise me about this city. But I walked away having learned a lot and a whole lot more curious about reusable toothpicks. Seriously, I think I need to revisit that store and shower my friends with this unexpectedly useful gift.

Shop for handmade toothpicks, red bean pastries and more on our Made In Japan tour!

Made In Japan: Cultural Curiosities

Explore hidden shops that sell traditional items not commonly found in modern-day Japan, and see a side of the city far from the bright lights of downtown.