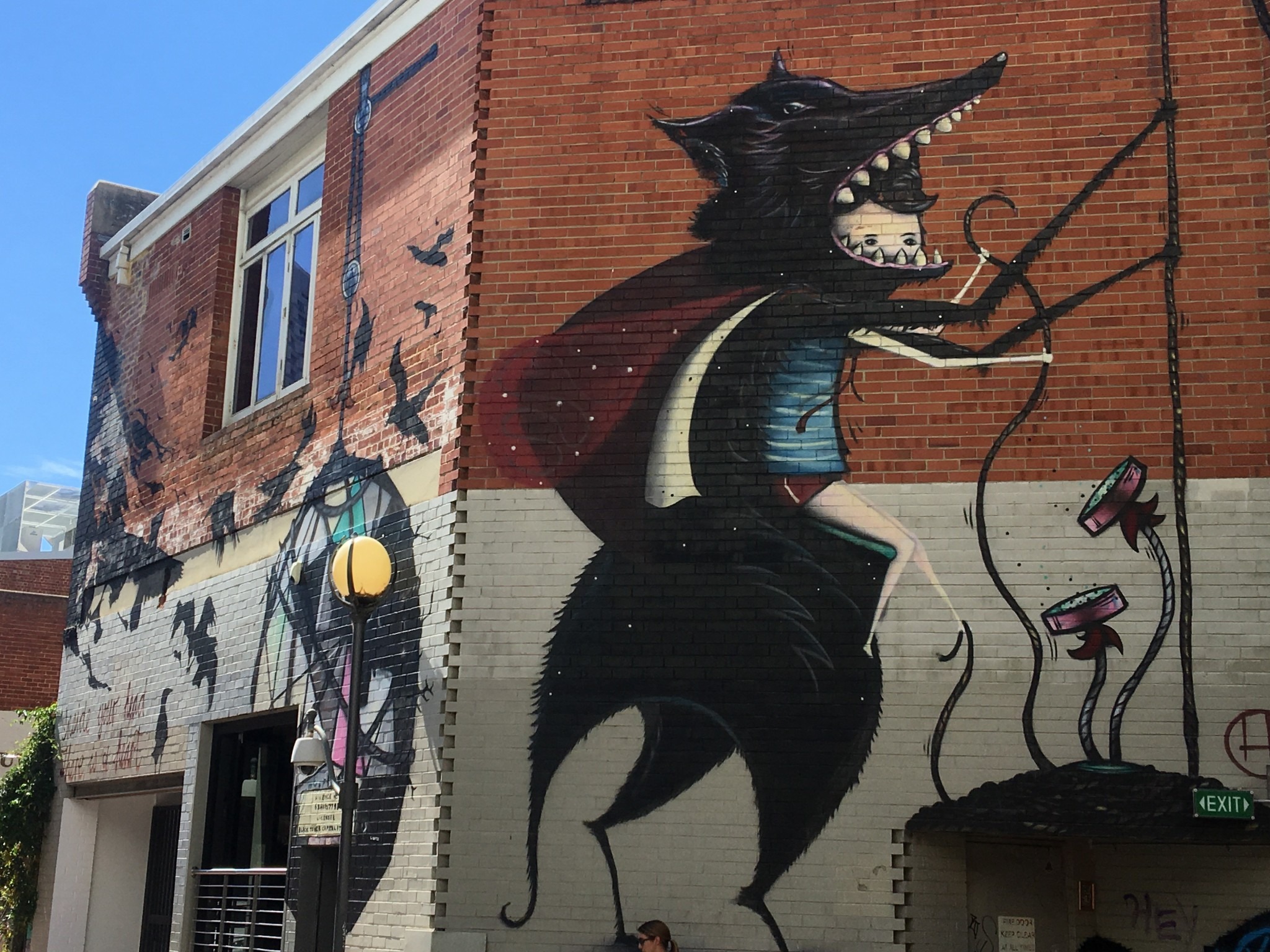 Perth is becoming a modern-day artist’s playground with its urban tapestry of street art adding new shades of colour to skyscrapers, laneways, and everything in between. Stretching from the city centre to Northbridge and all the way south to the port city Fremantle, street art is revitalising Perth’s public spaces, with new masterpieces transforming bleak walls across the city and sculpting Perth into a major cultural oasis.

Perth’s booming street art scene seeks inspiration from around the world. The City of Perth council and the independent not-for-profit organisation FORM have joined forces to challenge the old perceptions of street art and graffiti by enlisting acclaimed local and international artists to bring colour and personality to the streets. The influences have never been more varied and impressive, from intricate First Nations-inspired artwork by Argentinean-artist Pastel to simple marine-themed masterpieces by Fremantle-based, Dutch-born artist Amok Island. Native Perthians have also shown they have what it takes, as Anya Brock’s distinct bold hues and geometric compositions and Stormie Mills‘ contemporary character-based street art are igniting walls across the city as well around the state.

Nowhere is shining the light of progress brighter than the city centre itself. The commitment to brightening the city’s laneways and forgotten spaces under a local government initiative back in 2008 has paved the way for breathing new life into both the small bar scene and surrounding decaying facades and fixtures. The most prominent place to capture a glimpse of this movement is in a hidden pocket off the King Street Precinct.

One of the first laneways to be uncovered as part of a major project to revitalise empty spaces in Perth is Wolf Lane. You may not hear a wolf howl but you are sure to hear the sounds of revelry. Sandwiched between Perth’s high-end fashion strip King Street and independent retail stores, Wolf Lane is a mixture of quirky small bars and daytime cafés, surrounded by huge murals and charismatic small-scale art displays. Here you can enjoy a cocktail or two at the much-loved small bar Cheeky Sparrow, or the cosy Wolf Lane Bar, while taking in the walls that pioneered the creative movement in Perth. From left to right, a wall stencil by the incredible E.L.K.; “Fierce” by Anya Brock, 2014; “Telepathy” by Hurben; and “Not All Pain is Bad” by Andrew Frazer / adf designs | Photo by Ryan Mossny

Hanging about in car parks is not a usual fun-filled afternoon, but here there is a revolving art exhibition space proudly on display, surrounding the small undercover parking lot down Wolf Lane.

Renowned local favourite Anya Brock’s iconic face mural stands out with its colourful contrasts. Back onto the main drag, take a glimpse at a towering seahorse composite by Alexis Diaz or gaze at the commanding patchwork mural by New York artist Maya Hayuk. You could be forgiven for thinking that you had fallen down into a rabbit hole and ended up in Australia’s renowned cultural capital, Melbourne, with the amount of colour, creativity, and hipster vibes the area oozes.

Once you have a glimpse of the colour, you will want to discover more urban rainbows across the city and there are plenty more laneways nearby to do just that. The small thoroughfare Prince Lane provides creative inspiration in the form of a weaved montage by six popular Western Australian artists, including Stormie Mills.

Across the city is Howard Lane, where the striking décor of two chandeliers hovering above the street lets you know you are onto something special. A sharp turn around the corner not only leads you to two famed late-night joints (the delectable tapas bar Andaluz and Perth’s favourite whisky haven Helvetica Bar) but also to premier art works on display including artist The Yok’s Night Forest and Stormie Mills’ red, black, and white-themed The Conversation. By Argentinian artist Hyuro, whose murals don’t have titles, leaving it up to the viewer to interpret them | Photo by Ryan Mossny

No area is undergoing a dynamic change more dramatic than Perth’s largest entertainment precinct, Northbridge. Quashing its former reputation as an infamous hot spot for night-time activity, this area is now the beating soul of Perth’s community and night life events. Here the art scene is not limited to the walls — it stretches onto its food and drink offerings. With its small bar scene continuously sprouting up across the district, it is not a matter of where to go, it is becoming more of what will you discover — and nowhere is more exciting than a visit down Nick’s Lane. After chowing down a cheap eat in neighbouring Old Shanghai Food Court, head to the backstreets of Chinatown to discover Perth’s latest revived laneway. Everything is not what it seems in Nick’s Lane, with a hidden password-protected rum bar Sneaky Tony’s bringing a certain touch of exclusivity to the area. The once derelict walls are now splashed with colour thanks to the talented Amok Island’s striking Sugar Glider mural casting its beady eyes at you.

Creative flair is in the fresh Perth air and the winds don’t seem to be changing direction anytime soon. Geographical isolation from the rest of the world may be a blessing in disguise with a distinctive and ground-breaking street art movement evolving Perth into a unique and eye-catching colourful urban patchwork.