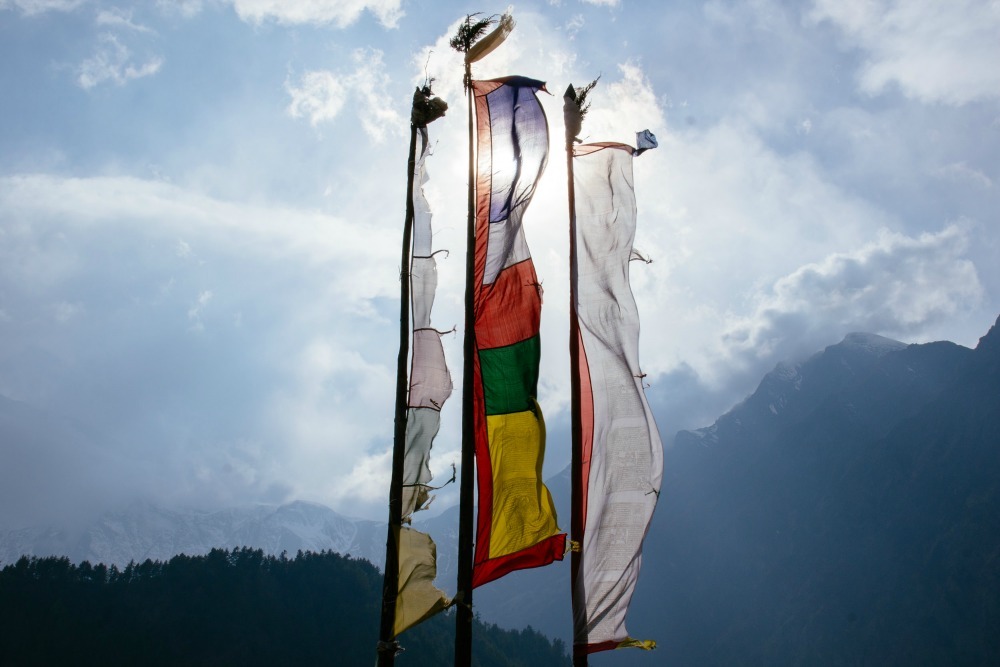 In the middle of the throng of Tibetan monks, nuns, and Nepali locals spinning prayer wheels as they make their way clockwise around Boudhanath Stupa, an old man pauses beside a statue.

Prayer beads looped loosely through his fingers, he presses his palms together and lifts them gently to his forehead as the rhythm of the Buddhist chant, ‘Om Mani Padme Hum’, leaves his lips. His calm moment of meditation lasts a few seconds and before long he’s resumed his place amongst the moving mass of young and old, layperson and monk. The old man pauses to pray at Boudhanath Stupa

All around us, the air is perfumed with incense, daily offerings are placed in shop fronts and street shrines, and the whole place seems to beat in time with the chanted mantras that filter down each street.

We’ve only been in Nepal for a matter of days, and already we’ve come to realise that this is a place where spirituality and everyday life are completely enmeshed.

This probably shouldn’t have come as a surprise given that Buddha was born here (in Lumbini, a mere 175 kilometres from Kathmandu), and although 81% of Nepal is actually Hindu, all religions coexist here in harmonious balance. In fact, Hinduism incorporates many of Buddha’s teachings and even considers him to be an incarnation of god Vishnu.

We’d come to Nepal mainly for the promise of its first-class hiking, friendly people, and beautiful vistas. Turns out, it’s a place that also serves up a healthy dose of spiritualism too.

Our encounter with the spiritual side of Nepal begins with the old man at Boudhanath Stupa, a vast 14th-century spherical Stupa that also proudly holds the dual titles of largest in Nepal, and the holiest Tibetan Buddhist temple outside Tibet. 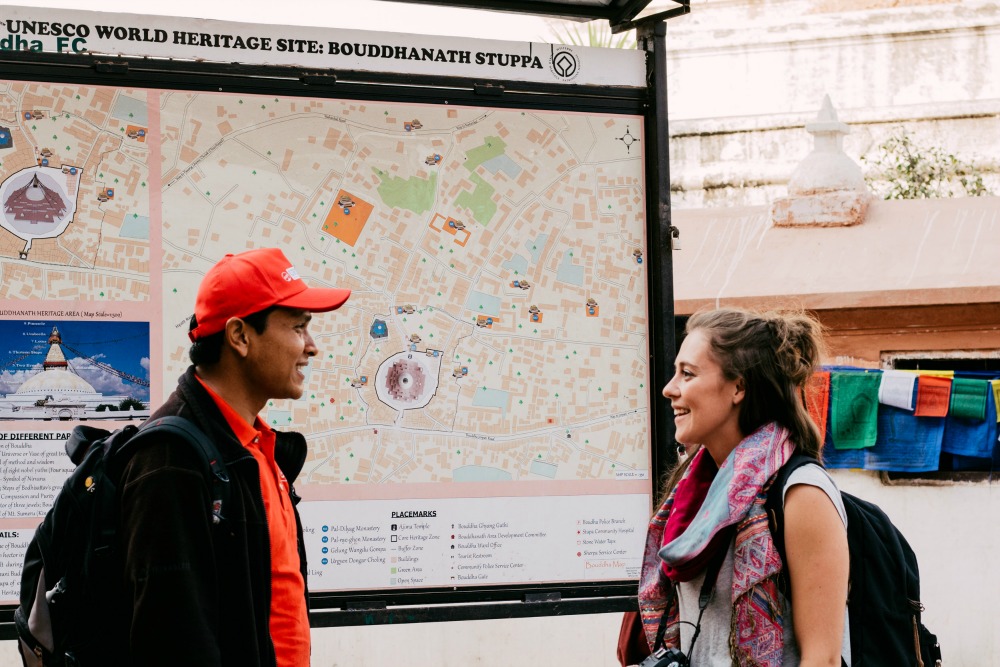 Our guide, Satya, takes us through some of the customs at Boudhanath on the Spiritual Nepal tour

Festooned with Buddhist prayer flags, the whitewashed dome and all-seeing eye of Buddha is already impressive when viewed at ground level — until we discover that when viewed from above, the complex transforms into the shape of a mandala and a tribute to Buddha’s path to enlightenment.

As we light butter candles in offering to Lord Buddha, pilgrims of all different ethnicities and religions circumvent the stupa, spinning the 108 prayer wheels and chanting as they go.

Nowhere have we seen a more obvious picture of cultural and religious tolerance; a melting pot of diversity has given Nepal a heart as beautiful as its landscape.

The watchful eyes of Swayambhunath

After struggling up the last of the 365 steps to the Swayambhunath Stupa, we find ourselves catching our breath beneath the watchful eyes of Buddha.

Following his gaze out over the valley, we’re greeted with an incredible view of bustling Kathmandu going about its day — a sight definitely worth the raised heart rate of the climb. 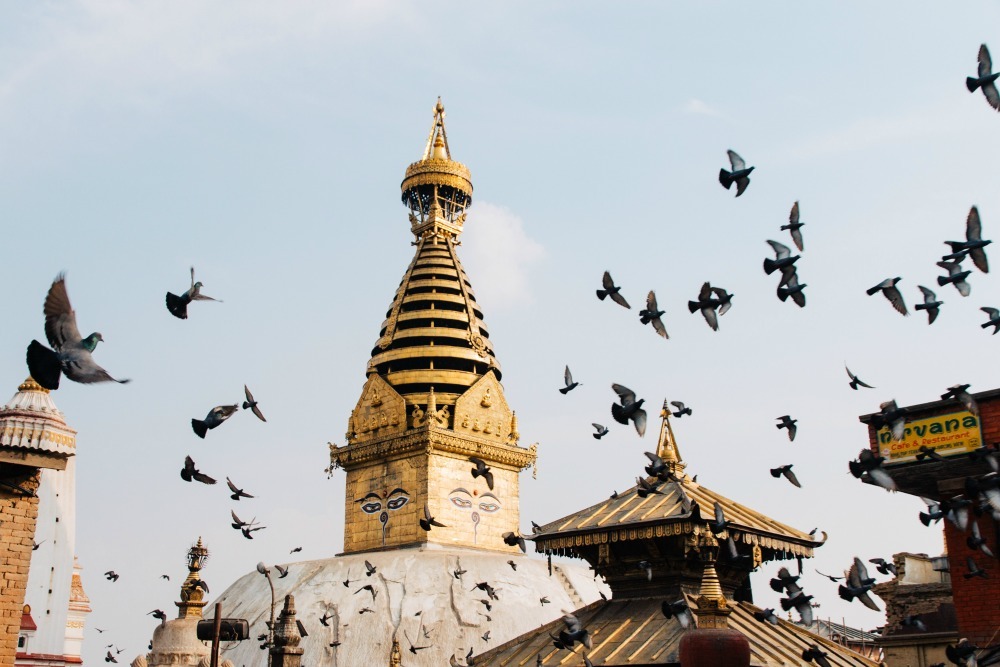 Swayambhunath is a beautiful, if not slightly chaotic jumble of Hindu and Buddhist iconography. There’s a heady scent of incense and butter candles, and the hum of the sacred om mani padme hum (in which all of Buddha’s teachings are said to be found).

It’s also known as the Monkey Temple, thanks to the holy monkeys that call it home, and it doesn’t take long before our furry friends have made their presence known — attracting a small crowd as they bounce nimbly along the narrow railings looking out over the valley.

While Nepal is constantly abuzz with the intoxicating chaos and bustle of human life, the sacred Pashupatinath temple is a sobering reminder that all life eventually comes to an end.

Honouring the Hindu god of transformation and destruction, Shiva, the site is so sacred that non-Hindus are forbidden from entering. It’s here, on the banks of the holy Bagmati river, that devotees are cremated on open air ghats. As their soul embarks on its journey to the afterlife and reincarnation, their body returns to dust and is finally swept into the waters of the holy river. Life and death exist side by side in Nepal, and nowhere is it more apparent than at Pashupatinath.

A red and yellow blessing is tied to our wrists by a Sadhu (holy man) as night falls gently over the complex. A different hum of activity starts to rise; people line the far bank of the river, and an elaborate offering of music, chanting, incense, lights, and camphor to Lord Shiva begins. The ceremony builds slowly until the whole crowd is on their feet, dancing as they chant and sing together in worship, and it’s impossible to resist being swept up in the energy of it all.

Resilience in the Durbar Squares

Bhaktapur, Patan, and Kathmandu; Nepal’s three Durbar Squares are more than just former royal palace — they’re also home to some of the most prominent and beautiful temples in Nepal. A local stops to greet us in busy Kathmandu

It was in the midst of the ruins at Kathmandu Durbar Square left by last year’s earthquake, that we discovered a lone statue of Ganesh placed defiantly atop some of the rubble left behind by 2015’s earthquake.

Draped with a marigold garland and flecked with brightly coloured powder from recent Holi festival celebrations, it was a poignant reminder that Nepal’s deep spirituality has remained resilient and stronger than ever.

The country and its cultural heritage may still be in recovery, but Nepal’s heart hasn’t changed one bit.

Spirituality in the mountains

Two weeks spent in the Annapurna mountain range confirmed a theory we had that if Kathmandu is the beating heart of Nepal’s spirituality, its hiking trails are the veins and arteries extending this lifeblood to every corner of the country.

Prayer flags in the breeze in the Annapurna ranges

From the Hindu villages of the foothills to the Tibetan Buddhist culture halfway up in Manang, every day on the Annapurna circuit reveals Nepal’s spiritual side. There are hindu tika blessings gently pressed on our foreheads by locals one day, and buddhist prayer wheels spun for good fortune in each village.

The trails are lined with fluttering prayer flags, and the call of ‘Namaste’ is constant. Each day we’re welcomed into communities by warm smiles, offered tea and fireplaces to warm our tired bodies again, and given blessings for the following day.

A place you need to feel

Whether you’re a spiritual guru, a self-help nut, or even an atheist when it comes to both, there’s something about Nepal that really does change you.

It’s impossible to escape the feeling of a place where religion and the gods are so carefully sewn into the fabric of everyday life. 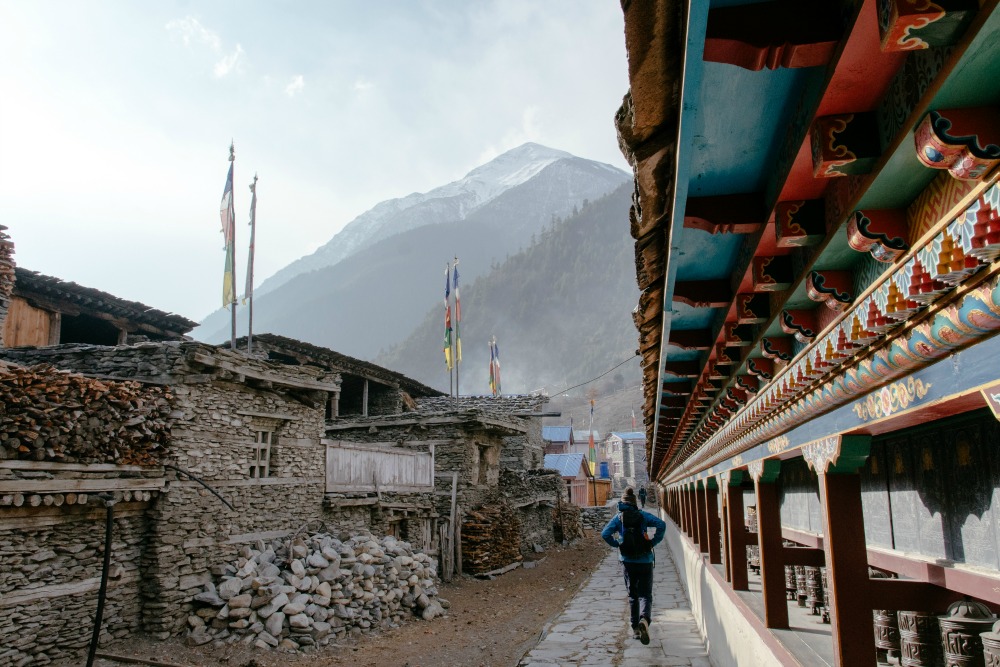 Spirituality in the mountains

While Nepal’s prayer flags float messages of love on the breeze, its culture flows through its rivers and deep valleys, and its deep spirituality lives on in the hearts and smiles of it’s people.

Nepal might have earned the title of ‘Roof of the World’ because of the towering protection of Everest and the Himalayan range, but perhaps it’s also because there’s so much life contained within.