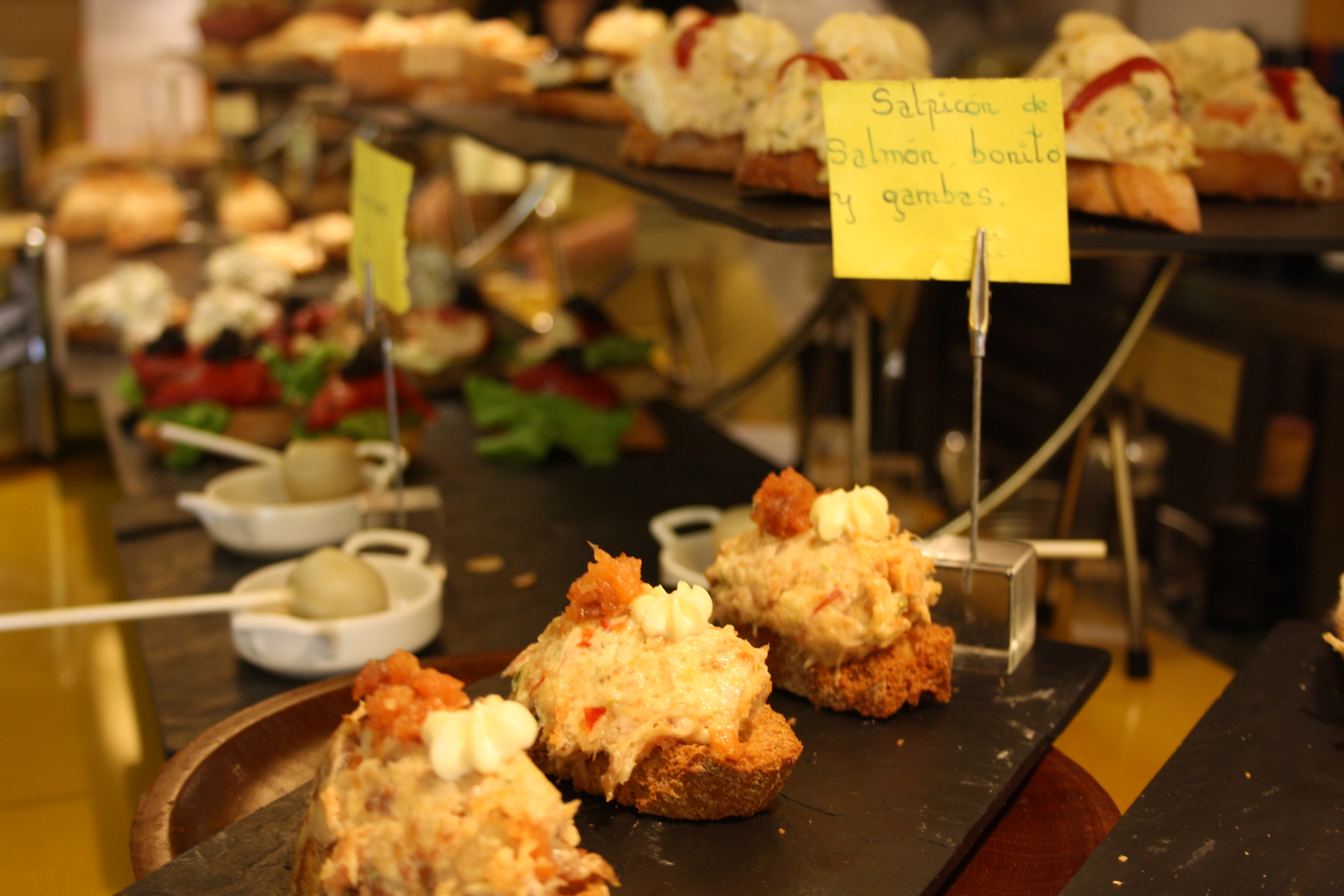 San Sebastian (or Donostia, as it is called in Basque) is gaining more and more reputation as a culinary reference in Spain. Visitors who come to the city will find food everywhere, and what might surprise them is the prevalence of speciality “snacks” in local bars. Pintxos are Basque Country’s answer to tapas and give you the best reflection of modern Basque gastronomy. San Sebastian has become the culinary capital of the Basque Country as a result of a few factors coming together under the proper conditions. Firstly, it was the summer resort of the Spanish Royal Family during the XIX century, which encouraged it to become the enthusiastic host it is today. Secondly, it is located in a territory, the Basque Country, which is itself a wealthy culinary region and showcases a varied gastronomy with a big capacity to reinvent itself. Finally, the Basque people are very attached to their own culture; they treat it with respect and celebrate its many manifestations in everyday life. In that sense, Basque culture is alive – it is in constant evolution just like its gastronomy, which keeps adapting to new times, new tastes, and new needs.

A very important part of the foodie life in San Sebastian is the fact that it is present absolutely everywhere. The variety of food options ranges from the fine dining restaurants of globally-recognized chefs like Arzak or Mugaritz, to more modest (but still excellent) places. Today we will be concentrating on the food that locals eat on a daily basis. Pintxos are the best testimony of the combination of high-quality ingredients and Basque respect for tradition. They are also proof that food culture is deeply inserted into the lives of the Basques. In each local neighbourhood, you find a lot of bars filled with locals relaxing and eating  a selection of small tasty creations. Pintxos are a part of the vivid culture that is built into everyday local life. In this sense, pintxos are quite accessible to any visitor who takes a day to wander along the streets of San Sebastian and taste the specials at each bar they pass. Pintxos aren’t the only expression of lesser known culinary aspects of everyday Basque life. Gastronomy Clubs, or sociedad gastronómica (Gastronomic Societies), are probably the best hidden secret of San Sebastian food culture. Unlike pintxos or Michelin star restaurants, Gastronomy Clubs are quite difficult for visitors to access. The reason is that only members and their guests are given the address. If you do not have a friend who is a member of a club, it will be rather difficult to experience a meal in one.

Gastronomy Clubs are private clubs where, historically, men would cook for themselves and enjoy a meal with  friends. Membership could be inherited from father to son, or bought if the candidate got the approval of all the club members. Nowadays, San Sebastian has over 100 of these places, and even if some of them keep to the old traditions, like not accepting women as members, others are changing these strict rules and adapting to the changes of society.

The food prepared in the Gastronomy Clubs is probably the best example of the Basque culinary philosophy – emphasis on the quality of ingredients and on sharing high quality meals in a familiar atmosphere. Basically they are an open kitchen with lots of tables for members to sit. If you are Basque and you want to invite your friends for a lunch, you will not take them to your house, but to the Gastronomy Club.

At San Sebastian Urban Adventures,  we offer a meal at a sociedad gastronomica located in Old Town. It is a club that dates back almost 90 years and it still keeps to most traditions and past rules. Our host is a professional chef and member who happily shares his knowledge on preparing dishes using simple local ingredients from the Basque lands. Guests of this tour will be able to enter one of these hidden “restaurants” to experience the importance of tradition in the food eaten in this region. At the same time, the food is prepared on the spot and unlike a typical restaurant, the menu at a Gastronomy Club is selected specially for each group and cooked for the exact amount of people coming. The kitchen is open so guests can see how the food they will be eating is being prepared and they might even get to jump in, get their hands dirty, and help prepare the tasty meal!