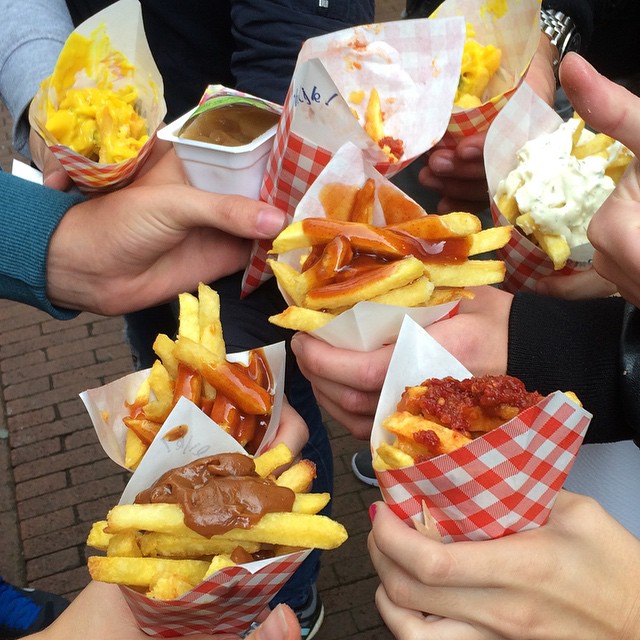 Must-try local foods around the world

If there’s one thing travel has taught us, it’s that you should never, ever, ever be hungry in a new city. Stuffed, full, waddling down the street — yes these are all perfectly acceptable. But if you’re hungry, you haven’t been doing enough exploring, in our opinion.

And every destination has its iconic dishes, the treats you absolutely must eat if you want to truly taste the local flavours. We asked our friends around the world to tell us what we need to devour in their corners of the globe.

“Sydney (and Australia) in general is tough, as we’re such a multicultural society and we’ve taken on so many amazing dishes from around the world. That being said, in Sydney, you must try a pie form Harry’s Café de Wheels (personally I recommend the Tiger Pie).”

“The options in NYC are ridiculous, but if I chose one it would be a bagel with lox and cream cheese at Russ & Daughters on the Lower East Side. Quintessential Jewish NYC food from an iconic shop that offers the best lox on the planet.”

“Every this and that guide will mention the obvious Czech foods, so let’s go for something different: ice cream made from Master Tmavý dark beer with plum, malt cookie crumbs, and caramel froth. You can get it at Čestr restaurant, which is one of the best restaurants I know. It manages to combine tradition with modernity in a non-pretentious way — very professional yet not stiff, high-quality everything yet there is always a great atmosphere. And the beer is super crisp.”

“In Zanzibar, I think everyone should spend one evening at Forodhani Gardens, which is full of food stalls after sunset. The best specialty is a Zanzibari pizza (very different from usual pizza). They can be salty, but also come with sweet fillings like banana and chocolate — so delicious!”

“In Annapolis, Maryland, anything that has Maryland/Chesapeake Bay blue crab in it (crab soup, crab cakes, hard-shelled crabs, soft-shelled crabs). The Maryland blue crab is found specifically in Maryland waterways, and they’re known for their sweet taste. People travel from all over to get their annual ‘fix.'”

“When I was in Istanbul, I fell in love with deep-fried mussels. I don’t even like mussels normally, but these were delicious. You buy them right on the street (I grabbed some in the oh-so-fun Ortaköy district along the Bosphorus), and they’re served on a stick, drizzled with a garlicky cream sauce. For the full flavour, you also have to make sure you have a cold beer handy.”

“Anything that comes in a bread bowl, especially clam chowder!”

“The kroket, or croquette. They come in different varieties, like the bitterballen, which are bite-sized and great with beer, or FEBO croquettes, which are best consumed at 2am after beers. But the most classic is mashed with your fork on white bread with a bit of mustard. Don’t forget to encircle your plate with your arm while you shovel it in with your other hand.”

“When my friend first suggested a shrimp sandwich for dinner, I have to say I was pretty sceptical. Shrimp on bread? Just didn’t sound right. But after buying fresh shrimp from local fisherman in the Stavanger port, picking up freshly baked bread, homemade mayonnaise, ripe avocado, and lush arugula, I was convinced they were onto something. And they are. The open-faced shrimp sandwich with tart mayonnaise, nutty arugula, and sweet freshly peeled shrimp was TO DIE FOR. It’s something I could never quite recreate at home, which means it’s time for a trip back!”

“LA is home to many crazy creations, but a classic that was invented here is the French Dip sandwich. I recommend trying it at Philippe the Original, where the atmosphere hasn’t changed much since its opening in 1909. (Coffee is now 40 cents a cup, though.) Order cafeteria-style and share a table with some old-timers. My personal favourite is the lamb dip but beef and turkey are available too. LA is also the birthplace of mochi ice cream, the California roll, and the fortune cookie, all of which were invented in our Little Tokyo!”

In Santiago, a must is the empanada de pino, a pastry filled with diced meat, onion, and olives, baked in the oven. It is a typical delicacy that Chileans love!

“Hot dogs in Iceland are king (and for good reason). Forget your ballpark frank or juicy street meat, Icelandic hot dogs are basic, no fuss, and they mean business. The most famous hot dog in all of Iceland is at Reykjavik’s Bæjarins Beztu Pylsur (aka ‘the best hot dog in town’), a 78-year-old hot dog stand near the city’s harbour that counts Bill Clinton as one of its satisfied customers. Even if you’re not a condiment fan, you really can’t skip any of the classics that Icelandic hot dogs come with: ketchup, sweet mustard, remolaði (kind of like a remoulade/sweet-relish-mayo dream sauce), and both raw and crispy onions (the latter of which are hidden under the dog – sheer Icelandic wizardry!). ‘The works,’ as it’s called, is when you order a hot dog with everything, aka eina með öllu. And you wouldn’t go all the way to Bæjarins Beztu and not get the works, now would you? You just can’t miss all the glorious goodness in store – especially the remolaði sauce! It’s so good, I hunted it down in the local supermarket and brought it home with me! Hands down, these hot dogs have the best sauce ever…it’s no wonder Bill loved this place.” “In the Basque Country: chipirones en su tinta. It’s calmari cooked with a sauce that’s made with tomato and the ink of the calmari. It’s a unique flavour and very typical for San Sebastián. Also, porrusalda soup. It’s a totally vegan soup that’s very typical of Basque households. It’s made with local vegetables like leek, potatoes, and carrots.”

“In Lithuania, cold pink soup (a creamy soup made from beetroot) is a must.”

“Locals call Chiang Mai “the City of Khao soi” in honour of this dish. Khao soi  is a mixture of Chinese and Mulim cuisines, and originated from the migrant Muslim-Chinese community in northern Thailand.  It’s egg noodles cooked with chicken or meat curry, and we then add chili, lime, shallots, and vegetables as seasoning.  It’s easy to find khao soi on every corner in the city, but we have a few favourite places: Khao Soi Samer-Jai, Khao Soi Lamduan, Khao Soi Nimman, Khao Soi Islam, Khao Soi Suthasinee, Khao Soi Khunyai, Khao Soi Fuangfa, and Khao Soi Maesai.” “A plate for those that are hungry is moussaka, generally made with minced meat, eggplant, bechamel, and potatoes (it may differ from region to region), and seasoned with oregano, pepper, cinnamon, and onion. You can also add some cheese. Another is the Greek sandwich, called gyro, which means ’round.’ It’s meat of your choice (chicken, pork, or kebab) usually with tzatziki (mix of yogourt, garlic and cucumber — very refreshing!) in a bread pita, along with french fries, tomatoes, and onions. It’s very common, and considered a fast food because it is prepared in 30 seconds and can be eaten in the streets. However, it is not recommended for dieters!”

“Dare I say a cheesesteak? You can get one anywhere in the USA but they’re definitely better from the source in Philly. The locals’ favourite, though, is the roast pork sandwich.”

“Phở (Vietnamese noodle soup) and gỏi cuốn (spring rolls) are two must-tries when you visit Vietnam. However, if you are visiting Hoi An, deep-fried prawn wonton and white rose are highly recommended.”

“When you are in New Zealand, particularly around Rotorua, be sure to have a traditional Maori hangi, which is an important part of the Maori culture. It involves putting meat, vegetables, and bread into a hole in the ground and using hot rocks to steam the food for a number of hours. The food comes out with an earthy flavour that you can’t experience anywhere else in the world!”

What other goodies did we miss? What’s your local must-try treat?

And if we’ve made you hungry for adventure, let us help you stuff your face on one of our food tours!