Blog > In northern Vietnam, a piece of unfinished cloth tells a story 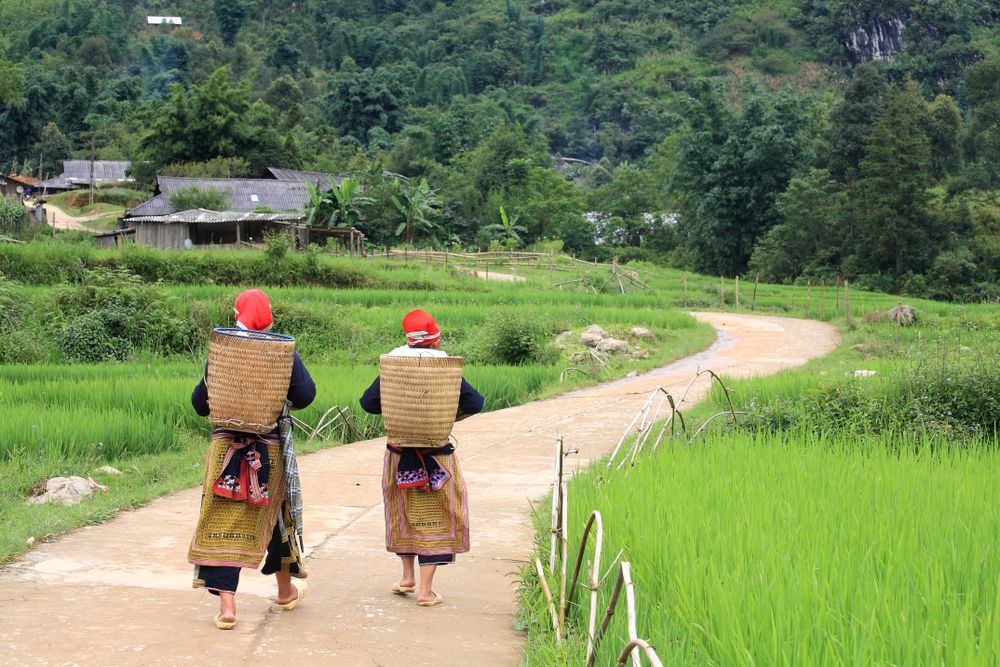 In northern Vietnam, a piece of unfinished cloth tells a story

I recently took a trip with my mother through northern Vietnam, and up into the mountainous region that borders Southern China. The people who have lived there for generations are not Vietnamese, but a mix of isolated and unique groups that retain very separate cultural styles — partly due to the remote and inaccessible locations of these mountain villages.

Sapa is the last town that can be reached by the Vietnamese rail line that runs the length of the country. Only two tribes live close enough to town to travel in and sell their wares to tourists: the Black Hmong and the Red Zhao (or Dzao).

The Black Hmong operate as guides and permanent vendors around Sapa, since they live close by, in villages that are an easy walk to town. The Red Zhao live further and have to travel into Sapa by bus to sell their wares at the markets, which limits the amount of time they can stay each day, as they need to catch the last bus of the afternoon back to their villages.

The Black Hmong and Red Zhao couldn’t look more different in terms of their cultural dress, which most people seem to still wear some version of — coupled with Western additions like wool coats and slogan t-shirts. The Black Hmong, as their name imply, wear largely black and navy colours, with pops of hot pink and lime green in their plaid headscarves. The Red Zhao match their name with red headscarves and black clothes intricately embroidered with white and red designs. The Zhao women also sport partially shaved heads, mostly covered from the winter chill by bright red headscarves.

Our guide around Sapa and the surrounding villages was a young Hmong woman by the name of Sai, who worked with Intrepid as a local guide. Her family lived in a neighbouring village and she took us to meet her mother in their traditional bamboo hut, where she explained to us the method of making the wax-resist indigo-dyed fabric that features in traditional Hmong outfits. Examples of this patterned fabric were available all through the local Hmong villages in the form of scarves, pillows and bags. My mother and I bought several pieces of the beautiful fabric to use as throw cushions and table runners back home.

Interestingly it is mostly the women who operate as guides and sellers around town. They travel in from the surrounding villages while the men stay home and tend the farms. Consequently, the local women around Sapa speak English quite fluently, allowing them to perfect their sales techniques. The women can be very pushy with their wares, but are also charmingly cheeky and self-aware about it, and have a great sense of humour.

Typically, the women will sell cheap silver bangles and brightly coloured handbags and purses. The bags look like they were all machine-made in one factory to a similar design and don’t reflect either of the local cultural styles. It baffled me as to why they sold them at all. It was especially odd that the Red Zhao women sold these when their own handicrafts, as displayed in their beautiful outfits, were so much more appealing and interesting. Try as I might, I found almost no Zhao women selling versions of their embroidered skirts or scarves.

On my last afternoon in Sapa I was determined to obtain a genuine piece of fabric from one of the Red Zhao women. The marketplace was closing up early, as the fog which had shrouded the town all day and left a clammy touch to everything, had kept most of the tourists away. Groups of Zhao women were sitting around on sacks filled with their wares, waiting for the afternoon bus. I approached a small group of women holding bunches of the generic handbags I’d seen sold all around town and asked them whether they had any of their own handicrafts for sale.

At first they didn’t seem to grasp what I wanted and I had to explain that I was interested in the sort of garments they were wearing themselves, with the precise and intricate hand-stitched detail. One woman finally dug through her sack, pushing aside all the cheap, factory-made handbags and unearthed a single swatch of fabric she had been working on. She explained it was going to be made into a lap-lap, a sort of apron worn over trousers, the same as all the Zhao women wore in their traditional dress.

The rectangle of fabric was black handmade linen, patterned with the same red and white designs typical of the Red Zhao style, with one edge still rough-cut, waiting to be sewn onto a belt. I explained to her I didn’t mind that it was unfinished. I wanted it anyway; how much would she charge for it?

A cheeky smirk came over her face as she told me, “$30 American dollars.” This was far more than any of the women had been asking for their wares all day. She knew how much I wanted the piece and she was no fool — she had the upperhand with the haggling. I tried negotiating but she was firm; $30 or no deal.

I realised then that the woman knew she could sell her cheap pre-made purses to tourists all day and make up that kind of money easily. But this piece was labour-intensive and made solely for her own use, not for sale to tourists. It was a special piece that she wouldn’t normally sell, and as I recognised that, I stopped haggling. The time and skill that had gone into this embroidered fabric was, in reality, worth far more than she was asking for it, even though $30 was a princely sum in the local currency for an unfinished square of fabric.

I gave her the cash as the local bus arrived and the women busied themselves with packing up their belongings and piling onto the bus for the long, winding journey back up into their remote village in the mountains.

That rectangle of embroidered fabric has now become a beautiful wall-hanging that decorates one of my rooms at home, and the intricately detailed stitching still brings me joy every time I see it. Not only for the skill and time that has gone into its construction, but the uniqueness of this souvenir. The Red Zhao culture has not yet been fully discovered and commercialised, and the Zhao women mostly only create these pieces of wearable art for themselves. How long that will last, who knows? But until then, this is a reminder to me of the beauty of a one-off, lovingly handmade item that will always hold so much more meaning than a factory-made piece, that’s one of a thousand just like it.