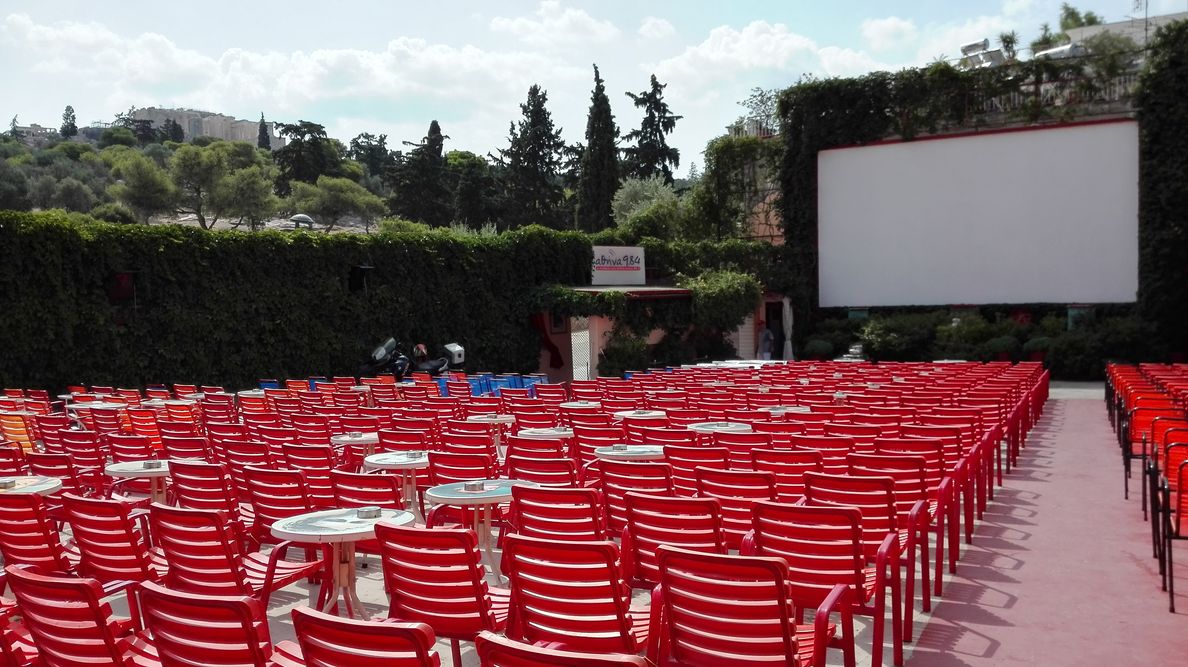 Open-air cinema is an important part of Greek culture, particularly for Athenians during the summer period. Almost every neighbourhood has its own open-air cinema, with more than 90 operating in Athens — and that’s actually not many, as back in the ’60, there were some 600 outdoor cinemas!

By far a much cooler and casual option than indoor cinemas, outdoor cinemas offer garden chairs, kafenion-style (traditional café) tables and great vibes. They’re the perfect place to relax, watching a movie under the stars accompanied with a cold beer or a glass of wine and local delicacies.

Each open-air cinema has its own atmosphere but we’ve narrowed down our top five due to their locations, their vibes and their neighbourhoods, all of which are great for exploring further before or after the screening.

Watch a movie and get a view of the Parthenon, all in one | Photo by Athens Urban Adventures

If you stroll around hillside Plaka with its village-feel (think narrow, cobblestone labyrinthine alleys, pastel-coloured houses, mythical monuments and souvenir shops), don’t miss Cine Paris, one of the oldest open-air cinemas in Athens, established in the 1920s. Located on a rooftop garden of an old building, this cinema is popular for both locals and tourists due to its magical location under the shade of Acropolis Hill. It’s a unique experience to watch a movie under the stars while at the same time catching glimpses of the emblematic landmark of Parthenon.

Cine Thision, the counterpart of Cine Paris, is another must for watching a movie under the Athenian sky. It comes as no surprise that this cinema is listed as one of the best open-air cinemas in the world. There are simply no words to describe the stunning view of the Acropolis or the excellent homemade snacks. Located in the heart of the historic neighbourhood of Thisio, it’s the perfect location for sightseeing prior to the movie. Walk along lively pedestrian streets and ancient roads, and visit ancient Agora and other magnificent monuments.

An ancient cistern called “Dexameni” gave its name to this classic open-air cinema, located in a cosy square of the Kolonaki neighbourhood, below the slopes of Lycabettus Hill. Only a few blocks away from the main arteries of the city, Kolonaki is famous for its cosmopolitan history and glamorous vibe. If you want to escape the overcrowded historic centre, this is the right place! Dress smart-casual and watch a movie at this atmospheric outdoor cinema, then keep the night going with a signature cocktail in a high-end bar or simply browsing the window displays of expensive boutiques.

Before the movie, explore alternative Exarcheia, maybe on a guided tour! | Photo by Athens Urban Adventures

Vox’s rooftop cinema is surrounded by concrete blocks of apartments in the most alternative district of Athens (and one the coolest neighbourhoods of Europe): Exarcheia. Away from the must-dos of on-the-beaten-track tourism, Exarcheia is the right area to explore the new Athens, where anarchists, students, intellectuals and artists prefer to live. Discover this explosive mix of people, admire great contemporary art and watch a movie overlooking the always-alive neighbourhood square.

Actually, BIOS  is not an open-air cinema but a multifunctional space that includes bars, live music venues, performance and installation spaces and cinema. It’s famous for the weekly screenings on its terrace during summer. BIOS is one of the hippest places of the Metaxourgeio neighbourhood, an area that’s known for its alternative vibe and hipster residents. Grab a beer, wear the wireless headphones (“Sssh! Silent Sound Show”) provided, and watch the movie that’s projected on the big wall of the adjacent apartment block, while also getting a glimpse of the amazing Acropolis.