Blog > Why Osaka is every foodie’s dream city 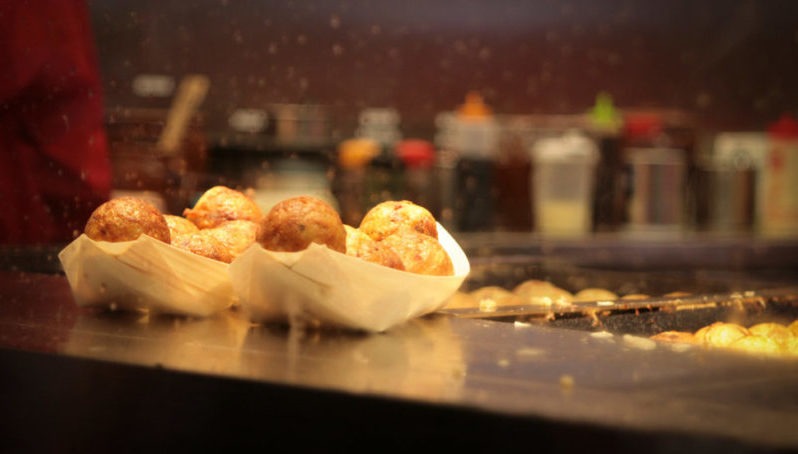 Why Osaka is every foodie’s dream city

Osaka was my first stop in Japan, and it quickly became clear what this place is famous for. Food. And my, was it glorious. I was constantly stimulated by the sights and smells of unrecognisable treats, my eyes and nose darting in different directions, not only in restaurants and supermarkets but also on the streets. The country’s second-largest city and an economic powerhouse, Osaka has a long history of feeding its 19 million inhabitants well, earning the city its motto: kuidadore, meaning “eat till you drop.” Luckily, even if you’re a budget traveller, you can do so and not break the bank. There’s an abundance of street food, cheap eats, and so much else on offer…

Why is it so good?

So how did Osaka get branded as Tenka no daidokoro — “the country’s kitchen”? Well, it comes down to good old geopolitics. Traditionally, the capital of Japan was decided by the location of its Emperor. From 1603 to 1868 — the Edo period — this made modern-day Kyoto the country’s capital. Kyoto didn’t lend itself to becoming a trade hotspot because of inaccessible geography, but nearby Osaka fit the bill perfectly.

As you’ll notice when you check it out on a map, this port-city has access to pretty much every terrain — the Osaka Plains house low-altitude crops, surrounded further inland by mountains. So the shogunate (military rulers) gave orders to gather goods in Osaka to be sold on to the rest of the country by its merchants. Thanks to a mix of geography and politics the city got first dibs on every ingredient produced in the country, and its food culture blossomed.

Kitsune udon is made with konbu, an important ingredient in Osaka’s food scene | Photo by Jen Welch

The development of the kitamae-bune sea route by the shogunate up to northern Hokkaido gifted Osaka with its most prized ingredient: konbu. 90% of the country’s konbu is sent to Osaka, showing just how important and unique this little root is to the country’s tastiest city. Like a gifted actor, it plays many roles. In partnership with soy sauce — which was used in cooking for the first time in Osaka — it makes shio-konbu. It is eaten dried, sprinkled over dishes in flakes, and shredded. However, it’s pièce de résistance is its feature in soup stock which forms the base of Osaka’s popular kitsune udon dish. Soup stock doesn’t sound very sexy, I admit, but needing no seasoning, this base stands to be one of the tastiest and most characteristic flavours in Osaka.

Compared to other Asian countries, English translations are less common in Japanese menus, so knowing your dishes in advance is highly recommended. Osaka’s most famous dishes, born and bred in the city, are okonomiyaki (cabbage pancake) and takoyaki (octopus balls). You will find these treats everywhere you go — both on the street and in restaurants. 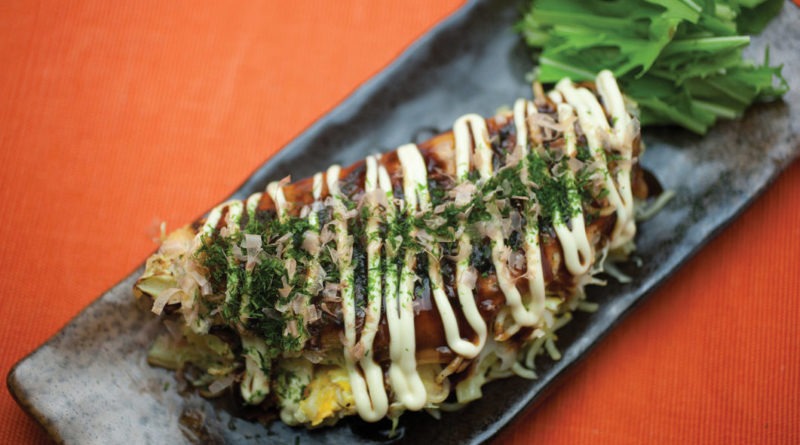 Cabbage pancake is a very simplified description of a delectable dish, okonomiyaki. Its Japanese name breaks down to mean “what you like” (okonomi) “grilled” (yaki). There are many variations, but in general you’ll find sliced cabbage and batter forming the base, with ginger, spring onion, and an assortment of meats mixed in for flavour. It is topped with unique okonomiyaki sauce (imagine a thick, sweet Worcester Sauce), Japanese mayonnaise, and seaweed flakes.

Other highlights include katsune udon, a broth accompanied by thick noodles and deep-fried tofu, and kushi-katsu, which is meat or veg that is deep-fried and skewered. The pork version of kushi-katsu is, in my humble opinion, the best of the bunch. There’s also sushi and ramen aplenty in Osaka. From 7/11s to high-end gourmet restaurants, you can find versions of both these popular dishes to suit any budget. (There is even an instant ramen museum for real enthusiasts!)

Many restaurants in Osaka are teppanyaki-style, meaning you have a hot plate incorporated into the dining table behind which the chef is stationed. This brings a whole lot of fun to the eating experience, because you watch everything coming together before you devour the tasty meal. Seats are arranged along a counter facing the hot plate, and like a performer the chef will work their magic, tossing noodles and flipping okonomiyaki with style and panache, then slide the delicacy towards you. Fumbling to look cool and composed while holding a pair of chopsticks, you eat the food directly from the hot plate, with a plate to catch the morsels that inevitably drop from your grasp.

If you’re really lucky, you’ll come across a restaurant where you are given the ingredients and left to figure it out for yourself, with your very own private hotplate on your table. Someone once pointed out to me that if you were given a bowl of raw ingredients at a restaurant back home and told to cook your own dinner, there’d be outcry and demands for your money back. But that person was a spoil-sport — what could be more fun than trying out a new type of food with unfamiliar cooking utensils in a foreign country?! Sheepishly looking over to Japanese people who actually know what they are doing, you can make your very own okonomiyaki and see whether you’re any match for the talented chefs of Osaka.

Ask this question in Osaka and you will be pointed in the direction of Dotonburi. This area came to prominence after it was used to wholesale the previously mentioned konbu root. Flash forward a few hundred years, and the district has an abundance of restaurants to choose from, both along its main corridor of neon signage and spilling into its back alleys. Top picks include Creo-Ru for street food and Daruma Kushikatsu for deep-fried skewered treats. The best place for okonomiyaki is Mizuno Okonomiyaki, but prepare to be queuing out the door — a sure-fire sign of a great restaurant. 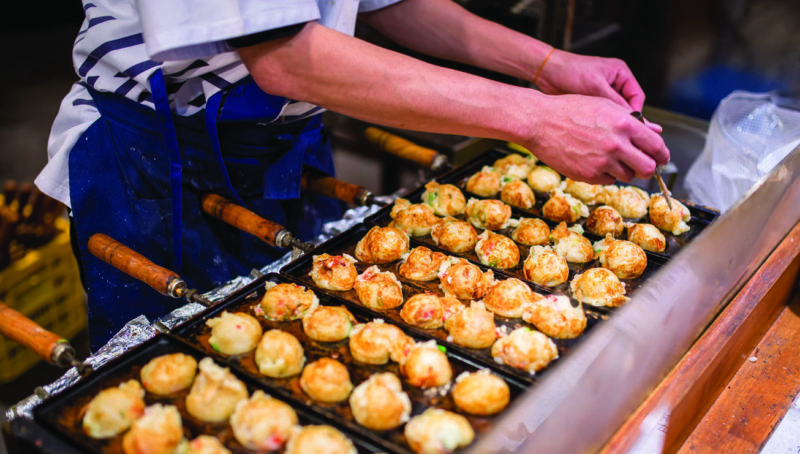 Another great spot for food is Shinsekai, the area that lies beneath the Tsutenkaku Tower, and where I first discovered takoyaki. This area is less about the sit-down meal and more about the wander around with a skewer in your hand, trying to gobble it down in time for the next treat you spot 10 metres down the road.

Kuromon Market is a must-visit for seafood dishes. You’ll walk down the corridors of this covered market and be entranced by the many different ingredients being sold, both raw and cooked. Head here with an empty stomach because it’s hard to resist picking up treats as you walk through.

But the real answer to the question of where to eat in Osaka is… anywhere. Try going off the beaten track, peep into a side alley, and discover one of the many homes that have converted their downstairs room into a mini L-shaped izakaya bar.

These pub-like establishments house only five or six diners and are about as intimate and authentically Japanese as you can get. You’re unlikely to be able to order anything in English, but push through the flapping plastic doors, point at something with a big smile on your face, experience food as the locals do, and you won’t even feel the need to.

Osaka is often missed on the map when people take a whirlwind trip across Japan. In between the bright lights and fast pace of ultra-modern Tokyo and the old-world charm and culture of Kyoto, people often forget that there exists a city that combines the best of both worlds!