Blog > How a local group is fighting poverty in Kenya, one pig at a time 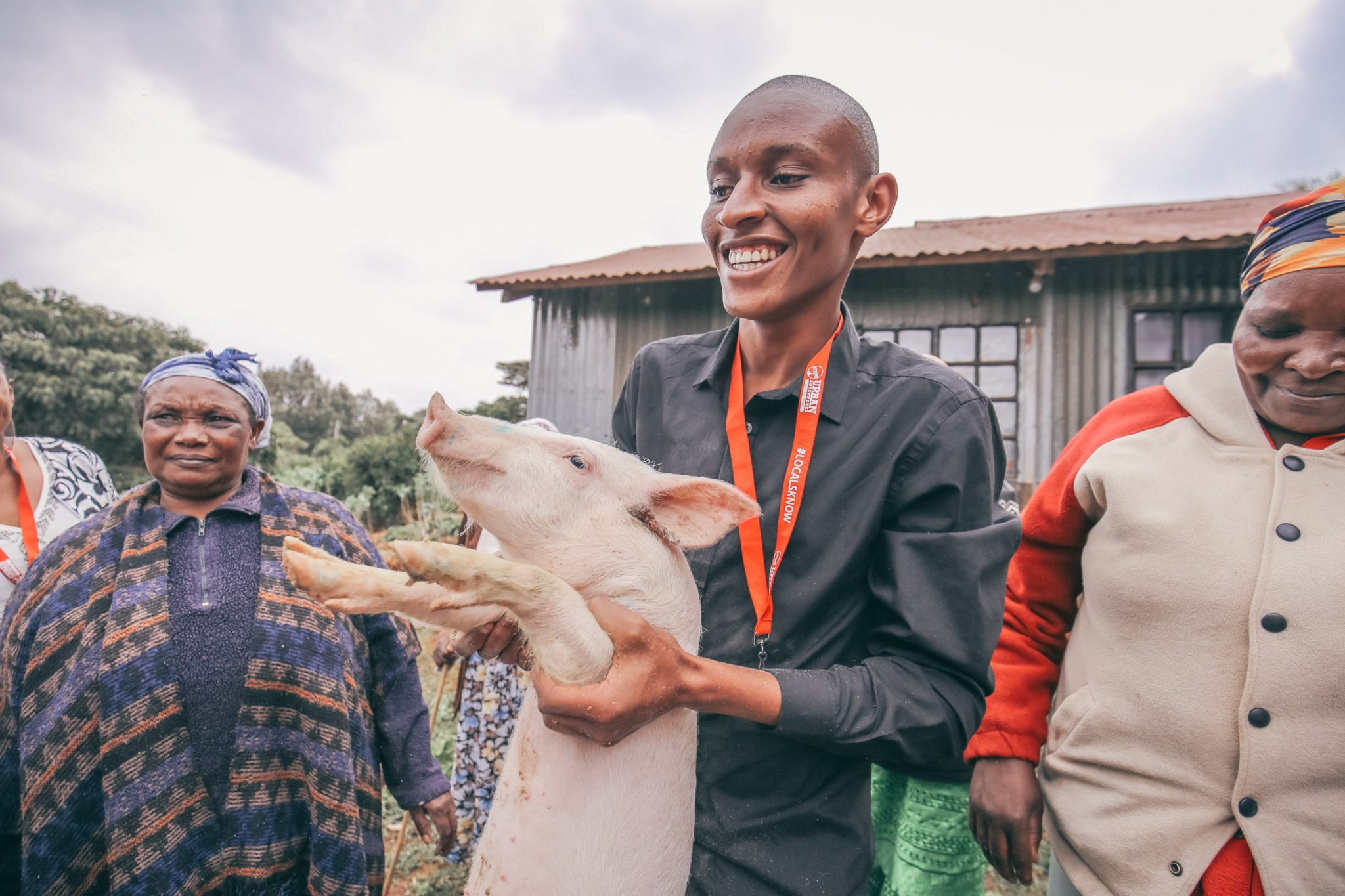 How a local group is fighting poverty in Kenya, one pig at a time

It’s our first day in Nairobi, and we’re on our way to market to buy some fat pigs. Except this time, we won’t be going home again and doing a jig. Instead, we’ll be delivering them to some ‘grandmas’ on the outskirts of the city, as part of Urban Adventures’ Farm to Feast In Focus tour.

While it may sound like some kind of overpriced hipster foodie experience, Farm to Feast is anything but. It’s a social enterprise tour run in conjunction with One Horizon, a local organisation working to alleviate poverty in Kenya and Tanzania. Our escort for the day is Colin Murray, an Australian man who established One Horizon 12 years ago, and Solomon (or ‘Sol’), a vivacious Kikuyu man from the Central Highlands — and our In Focus guide.

Before he started working for In Focus, Sol was a tour guide with a local operator, driving for 70 to 80 hours a week but getting paid just $150 a month. He was so exhausted that he would often sleep in the van under a blanket, and went for days on end without seeing his wife and two young daughters.

He tells us all this as we drive to the market. If the conditions were so bad, I ask, why didn’t he leave? “When you have a family to feed, what choice to do you have? You can’t stand up to corruption or just find a new job. It doesn’t work like that.” He smiles. “But now things are different.”

The ‘market’ turns out to be a small pig farm tucked behind an iron shack in a dusty backstreet of Nairobi. With Sol’s guidance, we select five of the healthiest looking piglets (all vaccinated), pay the guy and watch as some locals wrestle the animals into hessian bags and onto the back of two motorbikes. It’s quite a sight. Soon we’re back in the car and on the way to our destination: a local community centre and school.

It takes a village

On arrival, we’re greeted by around 20 brightly dressed kids, DIY bottle-top earrings looped around their ears. A cluster of older women stand behind them — the ‘grandmothers.’ After we’re introduced to the school principal, the group breaks into a series of well-rehearsed welcome songs (as people often do in Kenya).

“Where are the kids’ parents?” I whisper to Colin. He tells me that for one reason or another, they can no longer look after them; perhaps they’re too sick, or have passed away. So it’s up to the kids’ grandparents to care for them now.

The ‘grandmothers’ gather around | Photo by Damien Raggatt

After the concert is over, the women introduce themselves, some shy, others coming forward to clasp our hands warmly. We’re led around the back of the school to a pig pen, where we present the squirming piglets, one by one, to the group. Then we sit down together and enjoy a simple meal of beans, bread and ugali (a maize flour dish eaten across East Africa).

All these families don’t live here together, of course. Most have their own place close by, but come to the centre to tend the pigs and enjoy each other’s company while the kids are in class. That’s the thing that strikes me most about the experience, actually: an underlying sense of community, of support. These women aren’t raising their grandkids all on their own; they’re doing it together.

Both the World Health Organisation and the UN have recognised chicken and pig farming as some of the most effective small business industries for overcoming malnutrition in poor communities. For one, they introduce good protein into peoples’ diets. And because chickens and pigs breed quickly and are easy to look after, they’re also a sustainable source of income. 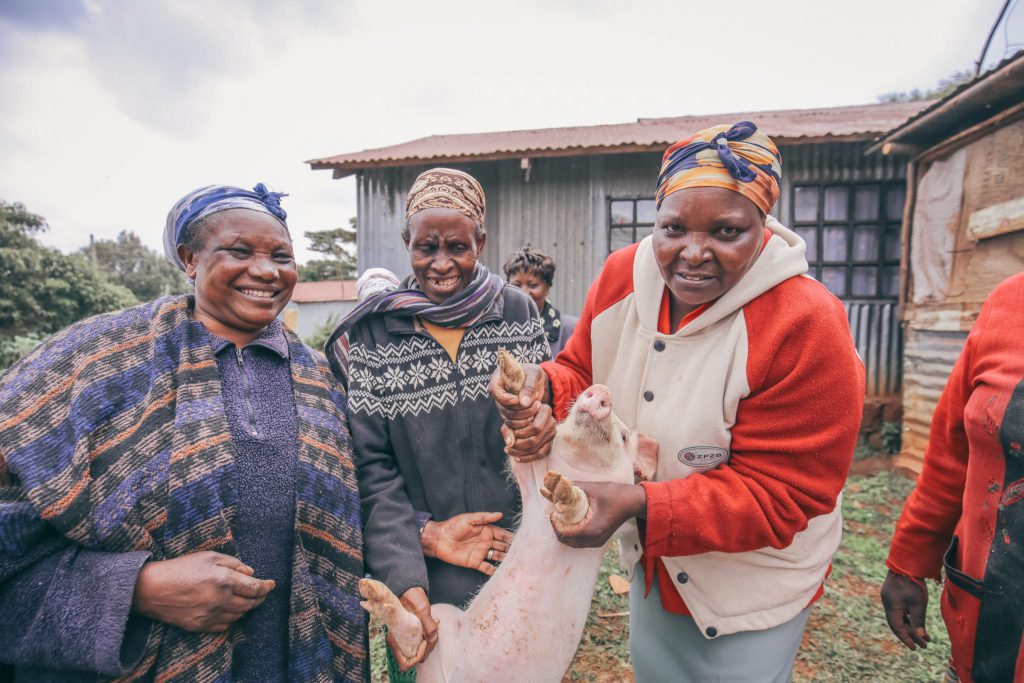 One pig costs USD 40, a price out of reach for most Kenyans | Photo by Damien Raggatt

It costs US $40 to purchase a stock piglet (or 10 chicks) in Nairobi. While in the West that might not seem like much, for many Kenyans — who live on just $2 a day — it’s beyond their means. Most of the women we meet today are no longer able to do strenuous work and there’s no pension in Kenya, so it’s hard to get by — especially when you have grandkids to look after. The simple gift of a pig can make a huge difference in their lives.

Once a piglet is handed over, it’s raised until it’s about 10 months old, then bred. You’ll usually get about 10 piglets in a litter; the farmer will raise them until they’re nice and big and can be eaten or sold for meat. A fully grown pig can sell for up to 20,000 Kenyan shillings (US $190).

Of course, it’s not just a matter of doling out pigs and skipping off again. One Horizon helps the women care for the animals by providing feed and scraps from soup kitchens and schools around the city. They also work with government livestock officials who come to show the new farmers how to keep their animals clean and fed, and how to build sturdy pens that keep out mongooses. The idea is to provide the grandmas with the tools and skills they need to start their own business, and support them to grow from there.

A full 100% of proceeds from Nairobi’s In Focus tours go back into One Horizon projects. One Horizon employs around 120 people and operates 23 centres in Nairobi — including women’s centres, schools, youth centres, centres for the elderly, and rescue centres for street kids. 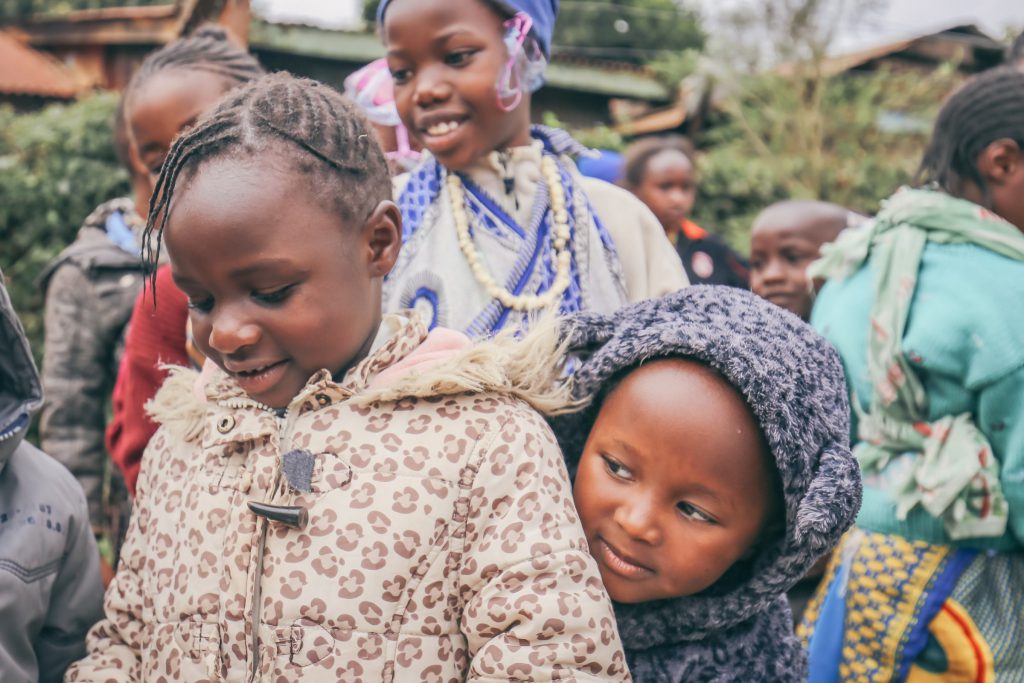 Every day, One Horizon feeds about 2,000 people. They buy from local farmers and grain producers, as it’s cheaper, supports the local economy, and means the money doesn’t go through corrupt systems or authorities. Plus, it’s good, wholesome food for the kids, who are also subject to regular health checks. “Solving poverty is not a monumental job,” says Colin.

The women’s centres provide rent-free housing for marginalised women to help them get back on their feet. Many women are HIV-positive and suffer discrimination from their own husbands and families, so are forced into homelessness. With the support of One Horizon, they train in small businesses — to be a seamstress, perhaps, or a pig or chicken farmer. It usually takes about two to three years for them to become self-sufficient.

Towards a sustainable, self-sufficient future

Like with the pig farming, this is the ultimate goal of One Horizon and indeed, all In Focus projects: sustainability and self-sufficiency. In the past 12 years, 32 centres have been handed back to local communities. About 200 women have graduated through the Farm to Feast program. The risk with this kind of work, says Colin, is the development of a ‘welfare mentality,’ but if people have an impetus and the support they need to start a business, it’s far less likely to happen.

He’s been quiet for a while, but at this point, Sol chimes in. “Some people think Kenyans are lazy, but it just isn’t true. Most of the time, they don’t have a choice. All they need is someone to help them, to support them for a while.”

I think back to the women at the school, proudly raising their pigs and grandkids. Lazy is the last thing you would ever call them.

Lonely Planet Best in Travel 2020: What not to miss according to locals
9 ways to be a plastic-free traveller
Over-Tourism in Santorini: What’s the solution?
How taking an Urban Adventures tour can help the local community
The best chocolate in the world is Austrian