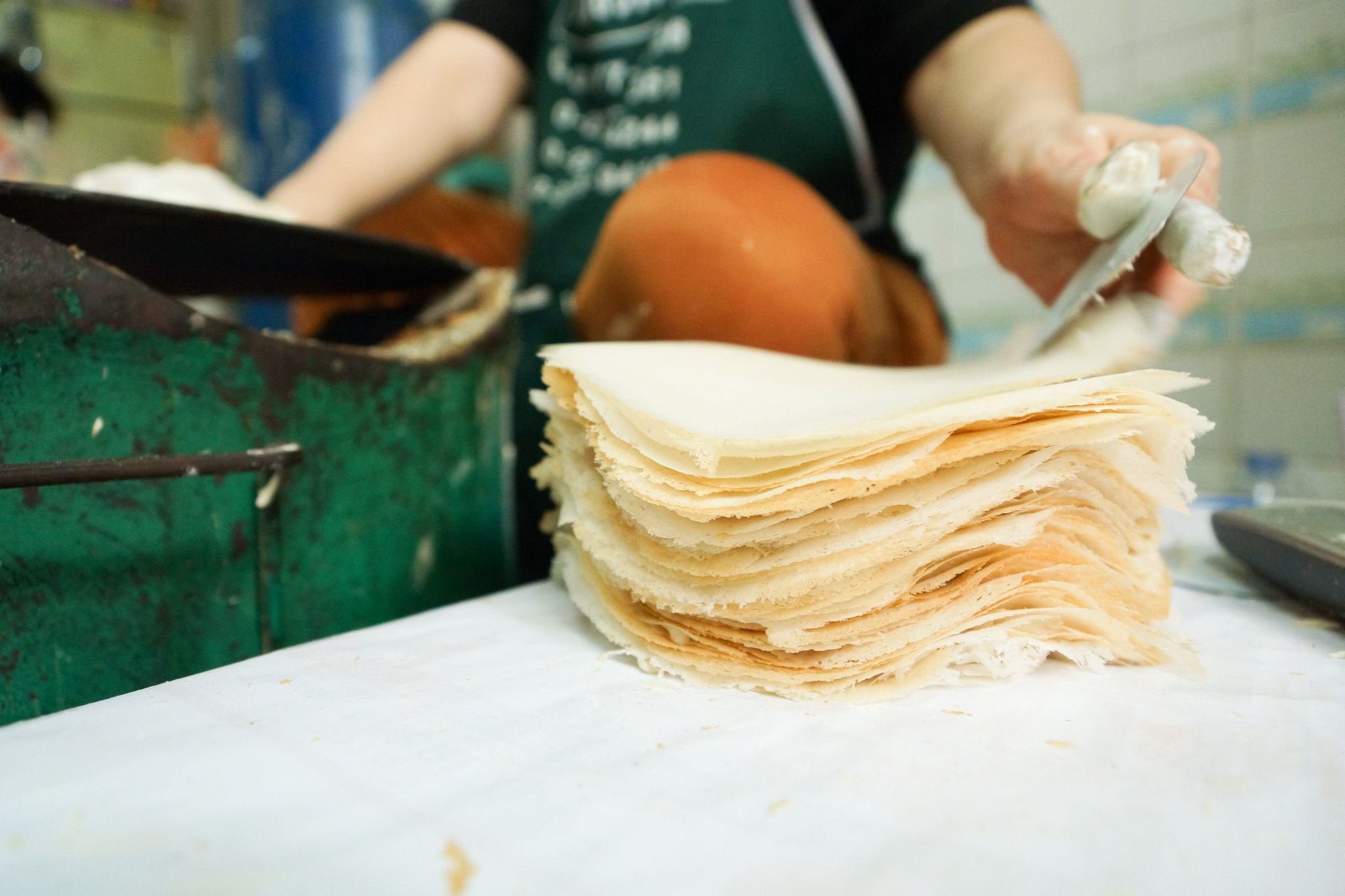 Today, Samsen Soi 2 in Ban Phan Thom is a bustling side street packed with tourists, thanks to the mega Nouvo Hotel and a substantial collection of guest houses and hostels in the surrounding alleys — not to mention backpacker ghetto Khao San Road just over the river. But when Hong’s parents opened up their Raan Porpiah roti stall in this spot over 60 years ago, the area was still a quiet corner of Bangkok’s old town.

In fact, the shop itself hasn’t changed much over the decades and to walk inside feels like stepping back in time. Most travellers wander past its entrance without a second glance, oblivious to the fact that a piece of Bangkok foodie history is in front of them.

Today, Hong and her sisters have taken over the business that their father established: making roti. Typically, when Westerners think of roti in Thailand (or rotee as it’s often spelled), they think of the finished product: something that’s stuffed and wrapped and deep-fried. But roti can also just refer to the wrapping itself, and that’s what Hong makes day in and day out. Her family’s shop doesn’t sell a finished banana or chocolate roti like you’d get from the street stalls that come out along Khao San and Rambuttri roads every night. Instead, their roti are the wraps that will eventually be turned into spring rolls — maybe even the same spring rolls you’ll eat at dinner tonight. For over half a century, this family-run shop has been making made-to-order rotee

For the past half a century, Hong’s family has flipped and twisted and rolled out wrappings that will be bought by food vendors, restaurant owners, and locals making spring rolls in their own home kitchens. They start at 6am daily, taking orders by phone — it’s a steady stream of regular business, as everyone wants wraps that are freshly made that day.

Hong and her sisters do sell one dessert, option, though: roti sai mai, and it is the ultimate sugary delight. You can order from them a bag of coloured spun sugar — the Thai take on cotton candy and resembling a mess of hair — and a bag of roti. Then, toss a few strands of the sugar into a roti, roll it up, and snack away. It’s both sweet and savoury and tastes like you’re eating carnival food from your childhood wrapped in a freshly made pancake (and really, can you think of anything better than that???).

How to find it: On Samsen Soi 2, directly across from the Nouvo Hotel.

What to order: roti sai mai (roti with spun sugar).

Bangkok’s old town may be tourist central, but there’s way more than just bad pad Thai to be found – that is, if you know where to look. That’s because hidden among the overpriced restaurants and mediocre food carts are secret gems that locals love, and many of these spots have been around for decades – since way before backpackers started gathering on Khao San Road.