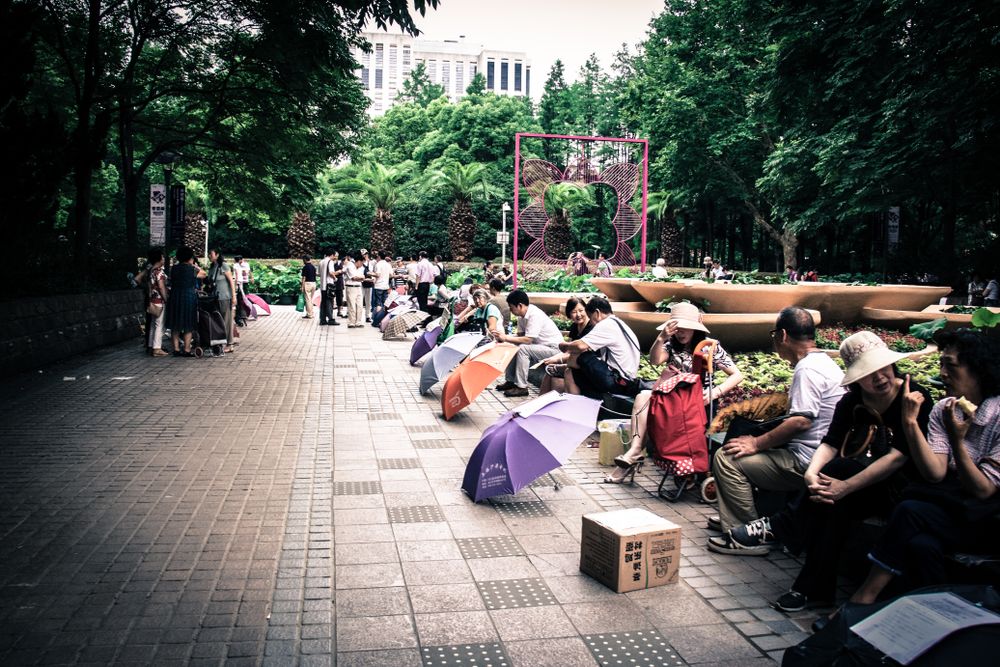 In 2016, SK-II, a Chinese skincare brand, filmed a takeover of Shanghai’s Marriage Market, marriage’s monument to capitalism in People’s Park in the city centre. Addressing the issue of China’s “leftover women,” the four-minute video asks for daughters to be permitted to be strong and free of traditional expectations.

The moment I moved to Shanghai, I knew I had to visit the Marriage Market myself, and what better way to see the market than with my father, who was visiting for the week. The market itself was less glamorous than it seemed on the video, so as a father-daughter day out it wasn’t quite like the movies — but I suppose that was down to filming tricks, and the media dressing themselves up like any keen suitor would.

As a late-20s, American-educated, Chinese-speaking young lady, I was immediately surrounded by huge groups of parents, grandparents, middle-aged men and women, and the occasional late 20s woman.

Their excited chatter filled my ears — talk about this or that gentleman who has a house, a car, a high-paying salary. Mention of a strapping man, 180 centimtres in height, born in 1983 and a super-Scorpio, grabbed my attention — as well as that of the parents next to me. These parents (and thankfully not my own father) gladly introduced their daughter and pointed to the gentleman’s traits, written carefully on a brightly coloured umbrella. (Umbrellas are used as a more eye-catching way to show their wares and their heirs.)

Each suitor’s details were either handwritten or printed and taped on opened umbrellas propped up on the ground, acting like a megaphone. As I witnessed the exchange between the two parents, I wondered what the girl was thinking. I looked at the expression on her face, and she seemed quite soberly serious about it.

I didn’t stay long enough to see if the match had been made and a romantic, if blind-at-best, date would be set, but it did make me wonder: What is the percentage of successful match rates at this market? Do the children want their information to be publicly exposed like this? Was this their choice? Or was it done in secret?

I did some research and found out that most parents do not have the permission to display their child’s information at all, and the success rate is quite dismally low. The Marriage Market is seen as preserving the traditional style of dating in a modern city, similar to arranged marriages done by matchmakers to continue the family lineage in an honourable way. The One Child Policy has also affected partnerships, as there are now many more men than women in China. It is predicted that by 2020, 24 million men will be unmarried and unable to find a wife. How horrifying is that thought for the parents of these beloved sons?

I asked my father if he would ever consider meeting someone through an advertisement on the street. He said he wasn’t sure, but he also wasn’t opposed to the people who were trying it. He said he appreciates the love of these parents, who simply want the best for their children: happiness, stability and pride for their family. Maybe it is just different — goals that aren’t as selfish as they may seem, but also not entirely selfless.

With more men than women in China, many parents are eager to find a daughter-in-law | Photo via Pixabay

I emigrated to the United States from China when I was six years old, and my views on relationships and marriage are quite different than the traditional Chinese thinking of a partnership. As a still fairly old-fashioned Chinese parent, my dad does emphasise how important it is that I find a good husband who is reliable and can support me. I don’t disagree, since financial security is a major reason for divorce in the West, whether we like it or not. But as a proud woman who likes to be independent and travel the world, it is hard to accept this as the reason behind choosing a partner.

But when you think about it, the Marriage Market is really just the same concept as Tinder, OkCupid, Match.com, Tan Tan, Grindr, or any of the other sites, except on an umbrella instead of a phone app. The same traits are displayed: height, weight, occupation, favourite movies, books, religion, etc. Except here in the Marriage Market, it is all a bit more serious — and not just about a one-night stand. The pressure seems quite higher here (and there’s less bulk shopping on this market!).

I spoke with some locals after my visit, and they told me the Marriage Market is also a form of socialising, for parents and grandparents to gather and speak about the wonderful tales of matchmaking successes, and their soon-to-be-pregnant daughter-in-law. While it might hold a lot of controversial traditions behind it, the atmosphere of the market really is about positive thoughts, love and encouragement from parents who just want their children to have the joy of creating a family.