Blog > The best cocktail bars and beach clubs in Bali 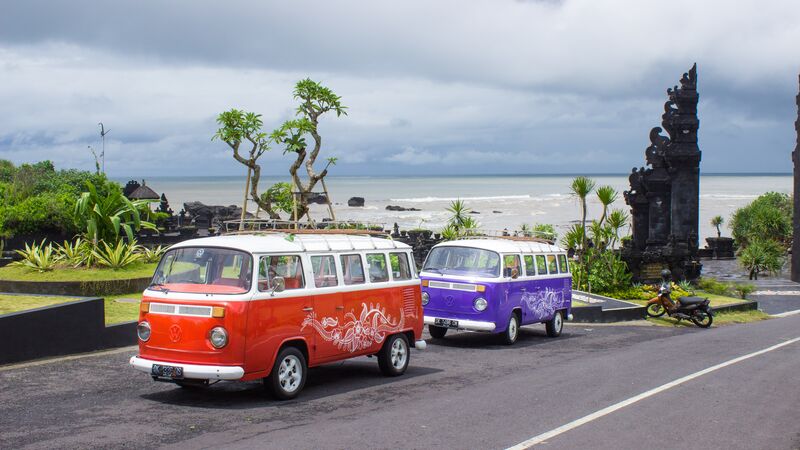 The best cocktail bars and beach clubs in Bali

Most people imagine a safari entails jumping in the back of a Landcruiser 4×4 to explore the African bush and spot elephants roaming the savanna. In Bali, a safari means hopping into the back of a tricked out VW Kombi for a cocktail crawl around the island.

Our VW Kombi Cocktail Safari with Urban Adventures started at Bali’s original beach club, Ke De Ta. There we met our big-grinned guide Dewa, a 25-year Bali tour veteran. We climbed into the spacious backseat, hooked up our music to the sound system and logged into the Kombi’s private WiFi network. 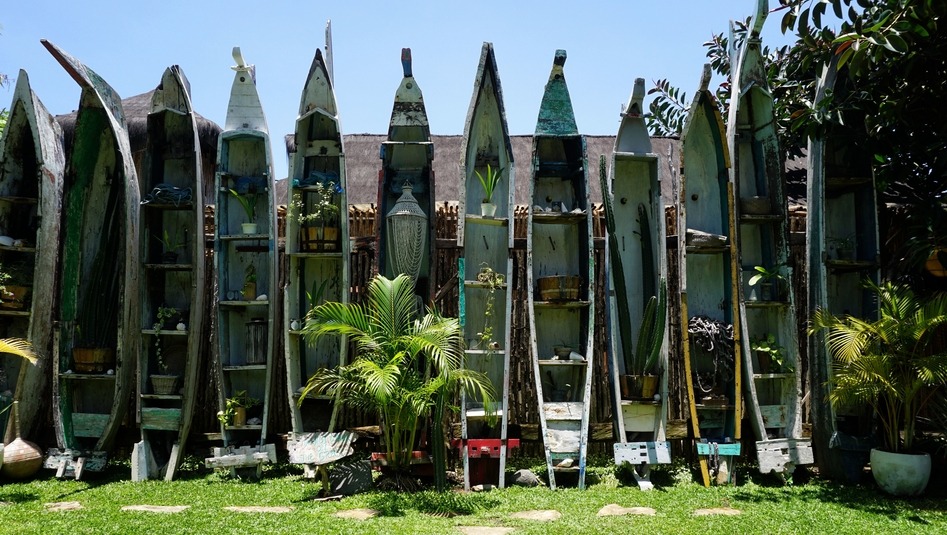 Soon we were off through the narrow streets of Seminyak, past the rice paddies of Canggu to our first stop: La Brisa Bali. Another one of Bali’s chic beach clubs, La Brisa is a trendy seaside bar with a large pool and ocean views. The entire place is made from reclaimed wood and has a eclectic “Old Man and the Sea” vibe. Dewa led us to two wooden chairs with unobstructed views of surfers and Canggu’s black sand beach and left us to order.

Since our tour started right around lunchtime we were hungry for a snack and a few cocktails. The healthy menu had acai bowls, sushi and different flavors of kombucha. But naturally, I ordered a side of fries and a lychee iced tea instead. After watching a few wipeouts on the waves we sped off to a countryside temple called Pura Batu Ngaus. 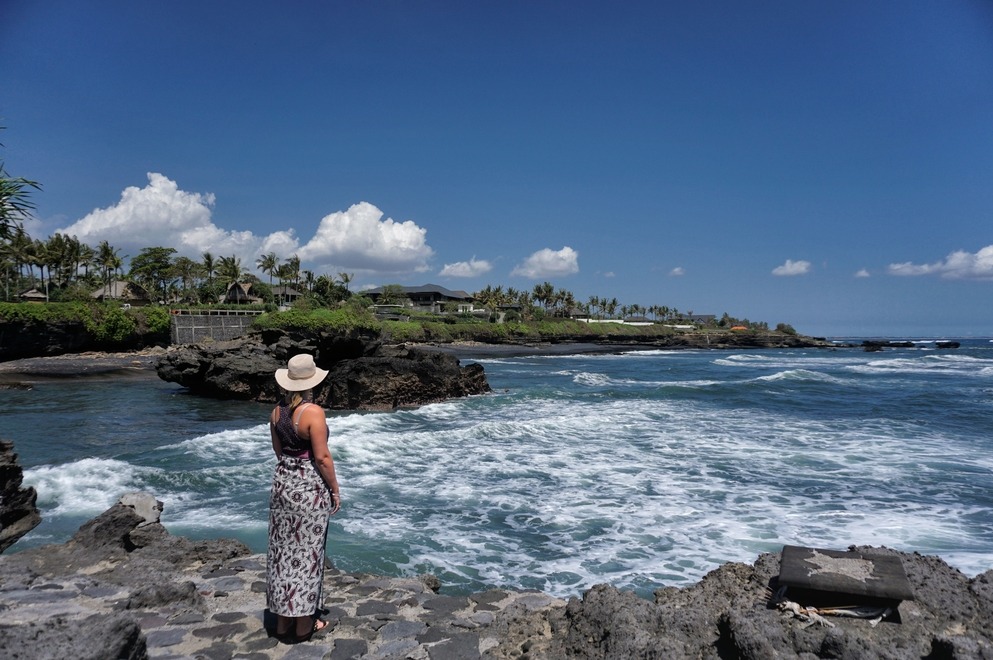 As we drove through local villages, Dewa told us that the temple we were visiting, stretches out over the ocean, and is a smaller and less crowded version of Bali’s famous tourist attraction Tanah Lot.

With Nyepi, Bali’s annual “Day of Silence” approaching in just a few weeks, he explained the Hindu’s unique holiday traditions which include creating a large monster known as Ogo Ogo to parade around the village and later burn by the ocean.

The waves were crashing up against the side of the temple as we approached on foot clad in floor-length sarongs. Dewa told us the sacred site was built by the villagers for the god of the sea and the god of rice. Built after the 15th century we explored the ancient temple’s different areas and learned the abbreviated version of how Hinduism came to Bali in the 8th century.

With the hot Balinese sun beating down on us we decided it was time for a cocktail. Dewa handed us a refreshing cold towel and we hopped back in the Kombi. Our vintage VW came equipped with a hidden electronic cooler loaded with iced beers, wine and water accessible by pushing a button. So we grabbed some more refreshments and soaked in the charming Balinese scenery at 40 km/h.

When we pulled up to Hotel Tugu Bali, we were in awe of its traditional Balinese design and giant Indonesian statue in the lobby. My partner and I skipped the pool area and opted to climb to the third floor with views of the waves and a cool breeze. I sipped a tropical energy boost smoothie while he got watermelon mojito. 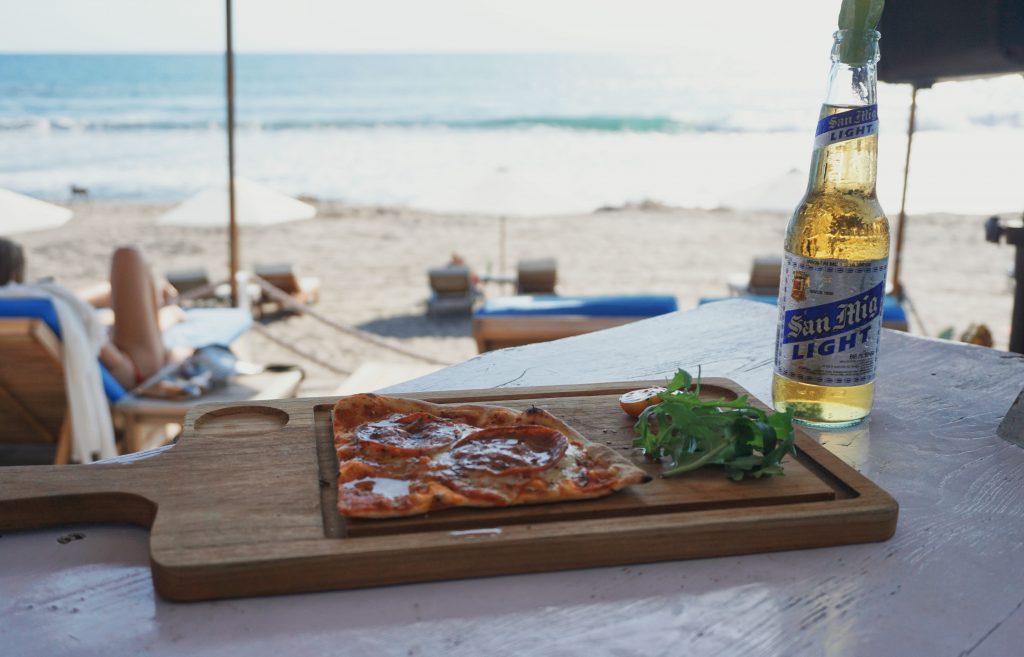 For the last stop of the day, we ended up beachside for a showstopper of a sunset. Il Lido, a casual beach shack themed bar served us slices of pepperoni pizza and a few more mojitos as the sun went down. After a full-day of cocktail crawling around the countryside, we were in need of a nap and a Balinese massage. Instead, we opted for a few more drinks.