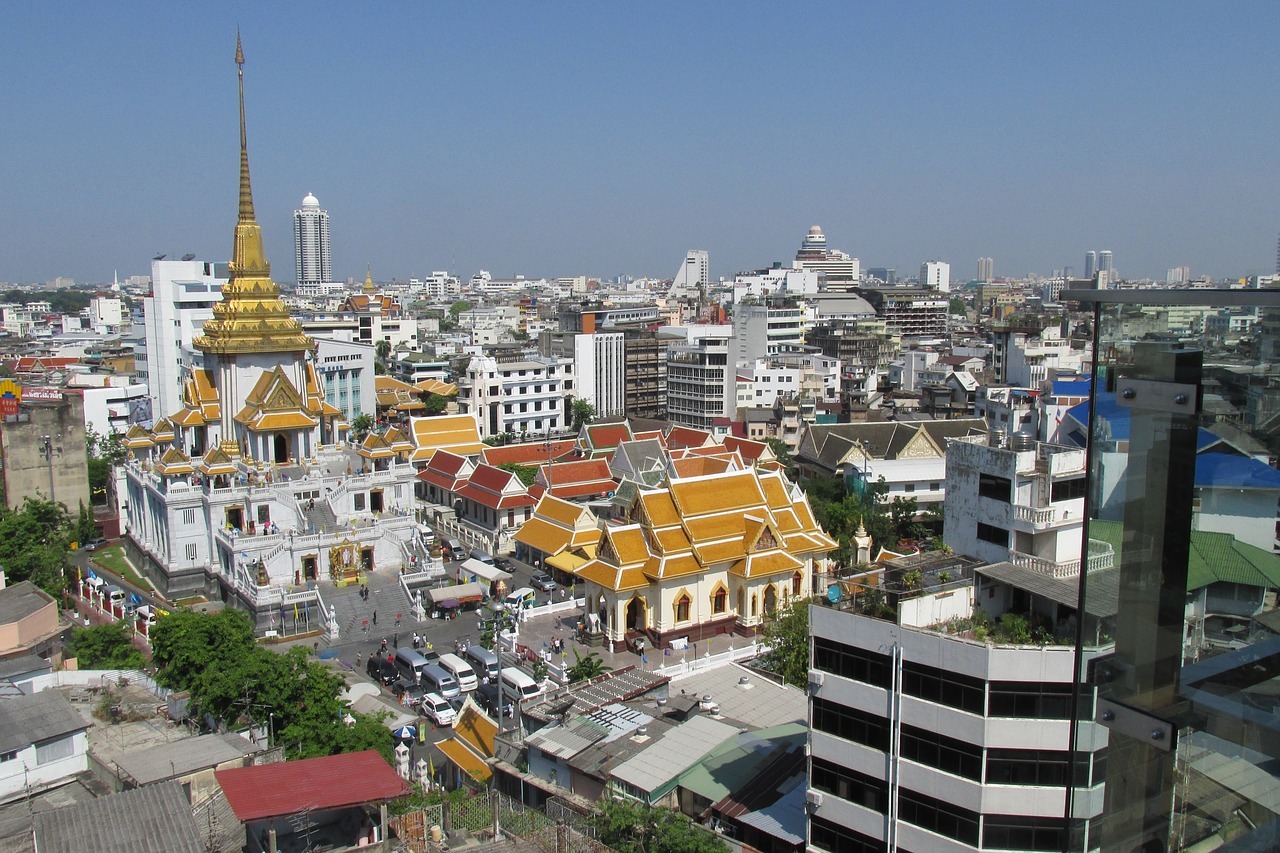 The complete guide to: Bangkok travel

Colourful, chaotic, beautiful Bangkok is the first spot for many travellers eager to explore Southeast Asia. But Thailand’s capital is also a must-see city in its own right for a variety of reasons, from cheap and delicious street food to awe-inspiring cultural attractions. Whether you’re just passing through or settling in for a few days of sightseeing, here’s everything you need to know before and during your trip to Bangkok.

Getting to and from BKK and DMK

You’ll likely be getting into Bangkok via one of two main airports, Suvarnabhumi Airport (BKK) or Don Muang Airport (DMK).

If you’re flying within Southeast Asia and travelling via a low-cost carrier such as Air Asia or Nok Air, you’ll likely be arriving via DMK and your best bet for getting to the city is in a taxi, especially if you have luggage. The trip should take 30 minutes to an hour depending on traffic and the fare should be roughly 350 THB.

From BKK, your best option for travel to and from the airport is via the Airport Rail Link Service, which operates between 6am and midnight. The airport rail link connects to MRT underground at Makkasan City Interchange Station (MRT Phetchaburi Station) and BTS Skytrain at Phayathai Station. The trip takes around 30 minutes and you can buy a token from vending machines at the station or from the ticket office. A ride will cost around 45 THB. 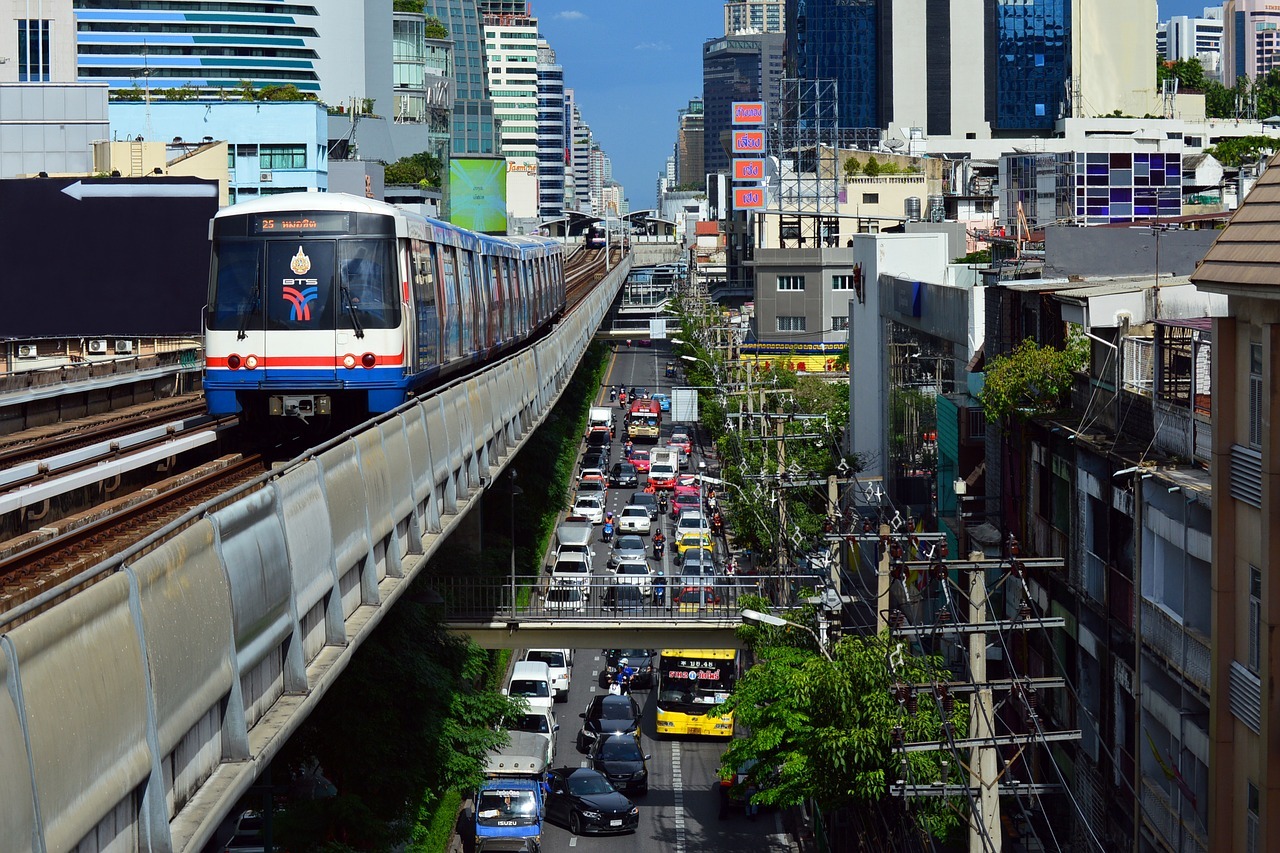 Getting around via Bangkok’s BTS Skytrain | Photo via Pixabay

There are three main options for getting around in Bangkok, including bus, BTS Skytrain and MRT (subway). The cost depends on the distance travelled, but prices start at around 7 THB for the bus, 15 THB for the Skytrain, and 16 THB for the MRT. Tickets for the Skytrain and MRT can be purchased from machines inside each station, and for the bus you pay onboard. All types of transit in the city operate between 6am and midnight.

The BTS and MRT are the easiest ways to get around since getting from A to B is fairly straightforward and the stops are well marked. The bus can be a little trickier, but it is your cheapest mode of public transportation. Get yourself an MBTA map (available at most bus terminals) to familiarise yourself with the many bus lines and routes.

Things to do in Bangkok

Grand Palace and Wat Phra Kaew (on the same compound) are not to be missed in Bangkok and combine into one of the city’s top attractions. The palace was once home to Thailand’s monarchy and the decorated halls, courtyards, pavilions and inner palaces on the sprawling grounds are worthwhile for the intricate architecture. The temple (Wat Phra Kaeo) inside the Grand Palace is Thailand’s holiest shrine and home to the Emerald Buddha, the most revered image in the kingdom. An audio guide can be rented for 200 THB for two hours. If you go, go early. The grounds can get insanely crowded as the day goes on. It’s also important to dress conservatively (no bare arms and legs, and note that a shawl/scarf will not suffice for covering up bare shoulders — but there are plenty of vendors around the exterior of the grounds willing to sell you sleeved shirts for marked-up prices).

If it’s great views you’re looking for alongside a dose of culture, head to Wat Arun, known as the Temple of Dawn. This large temple complex is one that visitors are encouraged to climb and if you brave the steps to the top you’ll be rewarded with panoramic views of the Chao Phraya River and city below. 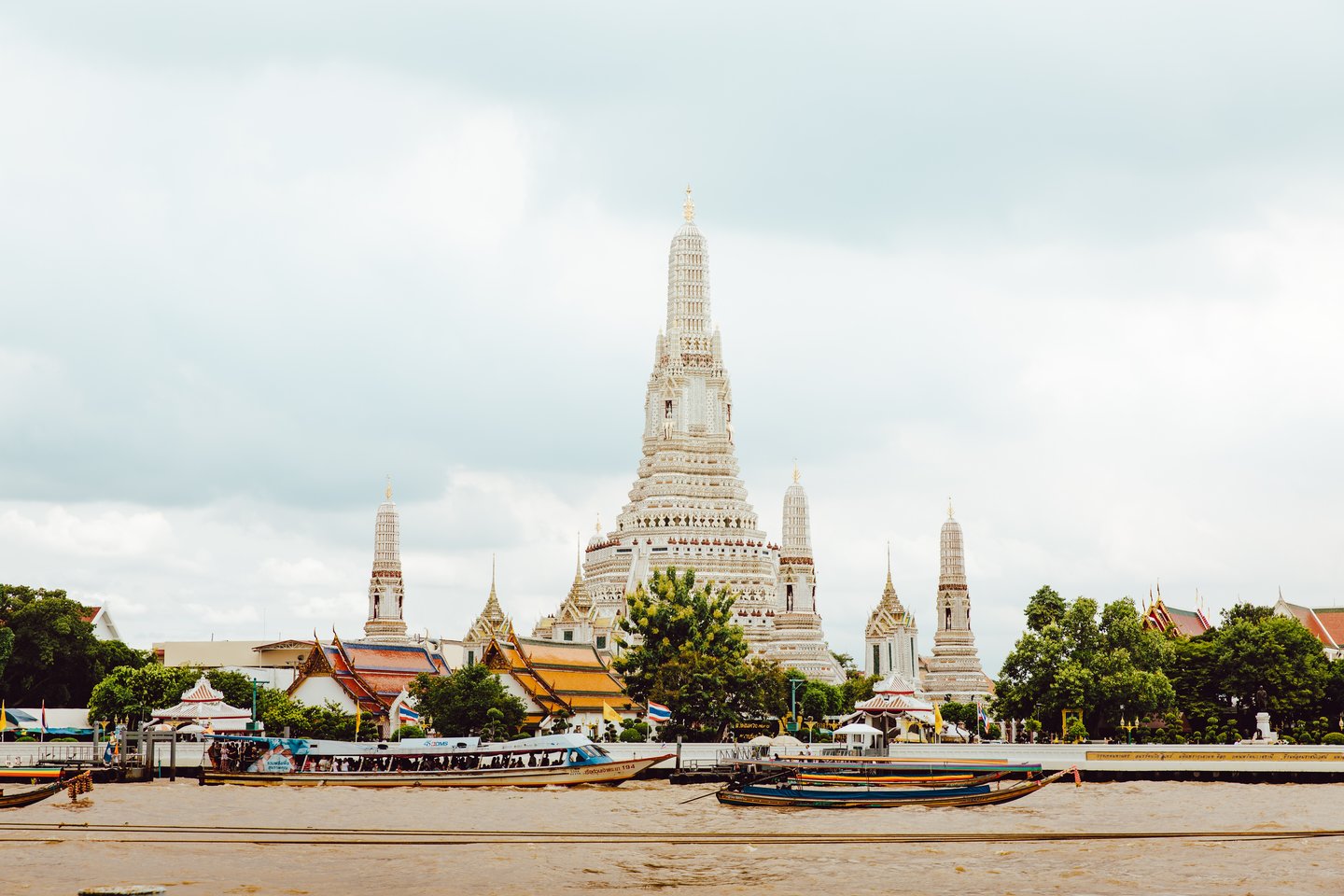 Grounds of Wat Arun | Photo by Evan Krause on Unsplash

Wat Pho (the Temple of the Reclining Buddha) is one of the largest temple complexes in the city and famous for the giant reclining Buddha it houses. The massive Buddha measures 46 metres long and is covered in gold leaf. Wat Pho is also a great place to get a traditional Thai massage courtesy of the traditional Thai massage school on the grounds. It’s an easy 10-minute walk between Wat Pho and the Grand Palace so it may make sense to combine them into one trip.

Chatuchak Weekend Market is among the largest markets in the world and the best place to go for souvenir shopping. You can find anything from housewares and clothing to books, antiques, plants and handicrafts. There are also many places to eat in and around the market so you won’t go hungry. Despite the fact there are more than 8,000 stalls here, the market is surprisingly easy to navigate. Come early to beat the crowds and the heat.

When you need a break from Bangkok’s hustle and bustle, head to Lumphini Park. This is the city’s version of New York’s Central Park and a great place to relax amid greenery without having to leave the city centre. Here you’ll find meandering paths, landscaped gardens, a lake where you can rent pedal boats and row boats for a serene ride, and there are free aerobics classes in the park (from around 5pm to 7pm) should you want to work up a sweat.

Looking for more things to do? Urban Adventures offers day tours in Bangkok, all led by local experts and that will give you a taste for local life:

Bangkok by Bike
Do your bit to relieve traffic congestion in Thailand’s capital by joining this Bangkok tour that trades in the tour bus for the humble bicycle. Cycle through Bangkok’s backstreets, along canals, past temples, and houses to see a side of this city that few visitors get to see.

Tuk Tuk Experience
Try to imagine Bangkok without the tuk tuks. It’s just not the same, is it? Join this Bangkok tour that uses everyone’s favourite compact ‘car’ to see some of the city’s best bits.

Chinatown Food Discovery
Had enough pad Thai to last a lifetime? Join this Bangkok tour to experience the Chinese food, culture and architecture of the Chinatown area. Be bamboozled by the market scene, see shops that sell nothing but religious paraphernalia, and try foods you’ve never heard of before!

Temple & River of Kings
In between the skyscrapers, towers, traffic and buzz of humanity, Bangkok hides a secret: a network of waterways that you can travel on without the stress of fighting traffic. Join this Bangkok tour to ride a longtail boat along the canals to see another side of Thailand’s relentless capital.

In Focus: Thai Cookery Class with Courageous Kitchen
Do you love Thai food? Do you want to learn how to make some of your favourite dishes? Do you want to give back to the local community during your stay in Bangkok? If so, this tour is for you! We’ll shop for the ingredients at our favourite market before heading back home to cook three tasty treats with the help of Courageous Kitchen, an inspiring non-profit organisation that encourages community leadership through the power of food!

Railway & Floating Markets
Escape the bustle of Bangkok to visit one of the must-see sites of Thailand: a floating market! Sail the canals of Damnoen Saduak and shop for souvenirs, Thai treats and other goods from the vendors who sell their wares from boats and along the riverbank. You’ll also visit the see-it-to-believe-it Railway Market, where an active train track is a makeshift shopping strip.

Private Bangkok: Off-Grid Food Adventure
Step away from Khao San Road. Before you take another bite of bad pad Thai in Bangkok’s old town, let us show you where to get real local food, just a few streets away. Our Bangkok food tour will take you around the Bang Lamphu and Ban Phan Thom neighbourhoods, showing you where the locals really like to eat.

Watch for a sneak peek some of the delicious dishes you can try on our Off-Grid Food Adventure!

Bangkok on the big screen

There are several movies to watch to get you in the mood for your trip to Thailand. A few to add to your list include The Beach, wherein Leonardo DiCaprio’s character starts his adventures in the infamous backpacker area of Bangkok’s Khao San Road; and The Hangover part II, which uses Bangkok as its backdrop.

Get ready for your trip to Bangkok with a list to Welcome to Thailand by popular local band Carabao.

A Geek in Thailand: Discovering the Land of Golden Buddhas, Pad Thai and Kickboxing by Jody Houton is a good pre-travel read before heading to Bangkok.

Dodge the typical tourist traps and adventure Bangkok with our local guides as they show you the unique sights, hidden gems, and busy back streets of the ‘Venice of the East’. Our tours in Bangkok explore the back streets by bike, the markets of Chinatown by foot, and canals by longtail boat. You’ll leave the city filled with local Bangkok knowledge, and know more about this dynamic metropolis than any other tourist in town.