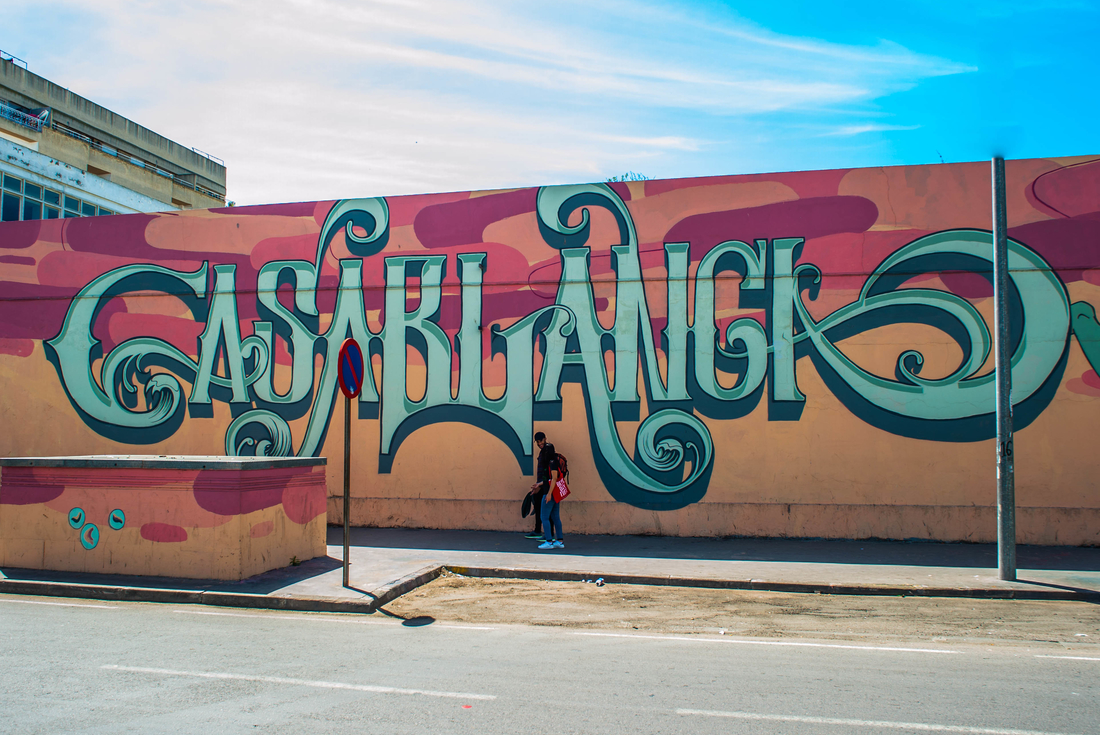 The complete guide to: Casablanca travel

For what it lacks in immediate wow-factor, Casablanca more than makes up with its gritty charm, the kind that gets under your skin the longer you explore. Scratch the surface and you’re sure to feel more like a local here than you might in other cities because this is a place for true travellers; people who crave discovery and stumbling upon hidden gems. Whether you’re into Art Deco architecture, urban beaches, food-filled markets, or history and culture, you’re likely to find it here. Read on for tips from our local Casablanca tour guides for making the most of your visit.

Getting to and from CNM

Your best bet for getting to and from the airport in Casablanca is by taking the train, which can be found below the ground floor of Terminal 1. The stop to get off at for the city centre is Casa Port and the journey should take around 45 minutes. The cost of a ticket is MAD 45. Trains run every hour from around 6am to 10pm.

If you’re travelling outside of the train’s hours, a taxi is also an option. The set price for a trip to the city centre is MAD 300, but note that the fare could end up being higher if you’re travelling at night. Some drivers get commission for taking passengers to specific hotels, so just be aware that you might be told your hotel or guesthouse of choice is closed — it likely isn’t.

One of the best ways to get around Casablanca is via the city’s efficient Casa Tramway, which runs every 15 minutes between 5:30am and 10:30pm. Tickets cost MAD 7 for a single journey and can be purchased from machines on the tramway platforms.

Taxis are also an option for getting around and fares for short trips within the city centre usually cost around MAD 15. Just note that fares jump by 50 percent after 8pm and it’s best to agree on a price before you get in for your ride.

Things to do in Casablanca

Jazzablanca is a week-long music festival in the city with a focus on jazz as well as contemporary music that happens during April. The festival takes place across two main venues in the city’s northwest: The Place de Nations-Unies, and the Hippodrome Casa-Anfa. Performers are comprised of both international and local artists.

If you feel like being by the water, take a stroll along Casablanca’s Corniche, the city’s beachfront promenade. In addition to being able to spend some time in the sun alongside the Atlantic, the area is also home to a row of cafes, restaurants, beach resorts and nightclubs which keep the Corniche buzzing day and night. If you want to spend some time on the sand, many beach clubs offer day passes, which include a sun lounger and an umbrella.

The Hassan II Mosque is one of the largest mosques in the world and the largest in Morocco, with a capacity for 25,000 worshipers. The mosque is open to non-Muslims via tours only, which last around an hour. Just remember to be respectfully dressed, meaning knees and shoulders should be covered.

You won’t want to miss a stop at the city’s Central Market to get a feel for local life in Casablanca. Browse amongst the stalls of local produce, spices and heaps of glistening olives, and don’t miss the seafood, including oysters aplenty. If you see any fresh-caught fish you like, you can have it cooked to order from area grills.

Shopping for olives in the market | Photo by Casablanca Urban Adventures

Casablanca’s Old Medina might not have the cache of other Moroccan medinas, but it does offer a great way to spend time exploring winding lanes and narrow alleys, where you’ll see locals going about their daily business. Rather than a maze of souvenir stalls, you’ll instead see regular day-to-day businesses (i.e., hardware stores, pharmacies), and this is a great spot to get lost, aimlessly wandering and then stopping for a mint tea at a cafe when you need a break.

Looking for more things to do? Urban Adventures offers day tours in Casablanca and beyond, all led by local experts who will give you a taste for local life in the city:

Religious Casablanca
Morocco is a place where multiple religions have co-existed side-by-side for centuries, sometimes even overlapping in traditions and beliefs. Get an overview of the region’s religions on this tour that takes you to some of Casablanca’s holiest sites, and shows how Islam, Judaism, Christianity and other faiths have lived in harmony for hundreds of years.

The Medina and Beyond
Experience the hustle and bustle of the medina as you browse everything it has to offer. Enjoy spectacular views of the Atlantic Ocean and sample some of our favourite pastries from a secret spot in an off-the-beaten track neighbourhood.

Marrakech Tajine Cookery Class
Receive a Moroccan masterclass on this Marrakech tour that will send you home with supreme, inside knowledge of tajine making and the delicate art of market haggling. Smug home cook alert!

Marrakech Medina, Palaces & Tombs
With alleys within alleys, and lane ways that lead nowhere, navigating Marrakech’s medina alone is a one-way ticket to Planet Frustration. Join this Marrakech tour to see it all, minus the sweaty confusion and language fails!

Casablanca on the big screen

While you might think the movie Casablanca should be the top mention here, the 1942 film wasn’t actually filmed in Morocco. Mission: Impossible – Rogue Nation starring Tom Cruise, however, used several filming locations in Casablanca, including the Old Medina and Hassan II Mosque.

Gnawa music is a traditional form of music in Morocco, based in African spiritual traditions and an important part of Moroccan culture. Listen to an example here to get a better idea of what the music is all about.

The Caliph’s House – A Year in Casablanca, by Tahir Shah, is the offbeat and often humorous tale of a family’s move from London to Casablanca to renovate a crumbling house, and the chaos that ensues.