The complete guide to: Marrakech travel

“I would rather starve in Marrakech than be a millionaire in Alberta,” said Juan Goytisolo, one of Spain’s most popular writers. Founded 1,000 years ago by a confederation of Berber tribes, Marrakech is the stuff of Orientalist dreams. With winding souks, stunning mosques and enchanting gardens set amongst the desert, there is no question that the word ‘exotic’ is the most over-used adjective when describing this colourful city. Enjoy traditional pursuits such as perusing the markets and visiting the Moorish palaces, or take a stroll around one of the cutting-edge art galleries or museums that have cropped up over the years. Read on for our total guide to Marrakech travel and get the most out of your stay in one of Africa’s most vibrant cities.

Getting to and from RAK

The city is served by Marrakech-Minara International Airport, which is approximately five kilometres from the city centre. The number 19 bus will take you right into the heart of the action for around 30 Moroccan dirhams (MAD). If you’re catching another flight within two weeks of your arrival, hold on to your ticket as you can use it again for a free return journey. Taxis are another option but beware of drivers asking for more money than the journey is worth. We’d recommend booking a transfer through your hotel or Riad, just to be on the safe side. Make sure you agree on a price before getting into the car (#localsknow tip: your journey should cost no more than 40 MAD if you’re travelling into the city centre). If you’re coming from Casablanca, Tangier or Essaouira, then check out the Supratours website for bus and train timetables.

The old centre of Marrakech is easily traversed by foot and walking is a great way to see all that the city has to offer. However, if you wish to explore the suburbs and beyond, buses are the best option and are pretty reliable and cheap. Bus services run from 6am to 10pm and tickets cost less than 5 MAD per journey. If you’re planning on doing A LOT of sightseeing, it’s definitely worth picking up an Ikhlas top-up card, which you’ll have to buy separately from a station. For something a bit different (and touristy) you could also try a caleche (horse-drawn carriage) ride. They can usually be found all over the city but you’re guaranteed to find one at the Square de Foucald. They cost around 150 MAD an hour.

Things to do in Marrakech

No visit to Marrakech would be complete without experiencing the exhilarating hustle and bustle of the Djemaa El-Fna and the souks, the focal point of the city. This is where everything happens; rows of open-air food stalls line the square, filling it with mouth-watering aromas as jugglers, storytellers, snake charmers and magicians entertain the crowds. The souks offer a dizzying array of handicrafts, spices, fabrics and souvenirs to take home with you but be prepared for some persuasive sales tactics, which really is all part of the fun. 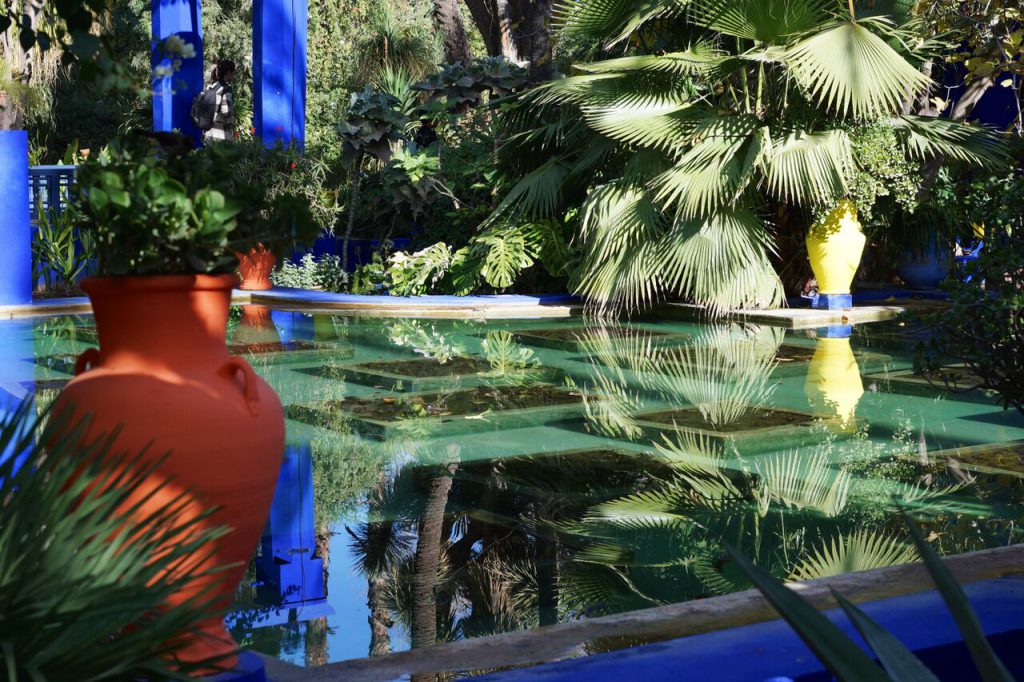 Garden Majorelle is a stunning botanical garden and cultural complex that was curated over a 40-year period by famous French painter and Marrakech resident Jacques Majorelle at the beginning of the 20th century. It is more than just a garden however, boasting fountains, a café and a memorial to another long-time French resident, Yves Saint Laurent, who lived next door. There are also two museums on the site, one dedicated to the history of the Berbers and the second, newly opened in 2017, is a celebration of the life and works of Yves Saint Laurent.

Bahia Palace is one of the best preserved historic buildings in the city with lovely gardens as an added bonus. The Palace was built in the 19th century in the traditional Moroccan style for the Sultan’s right-hand man, Si Moussa. The Palace also regularly plays host to local events and exhibitions, including the famous Marrakech Biennale. 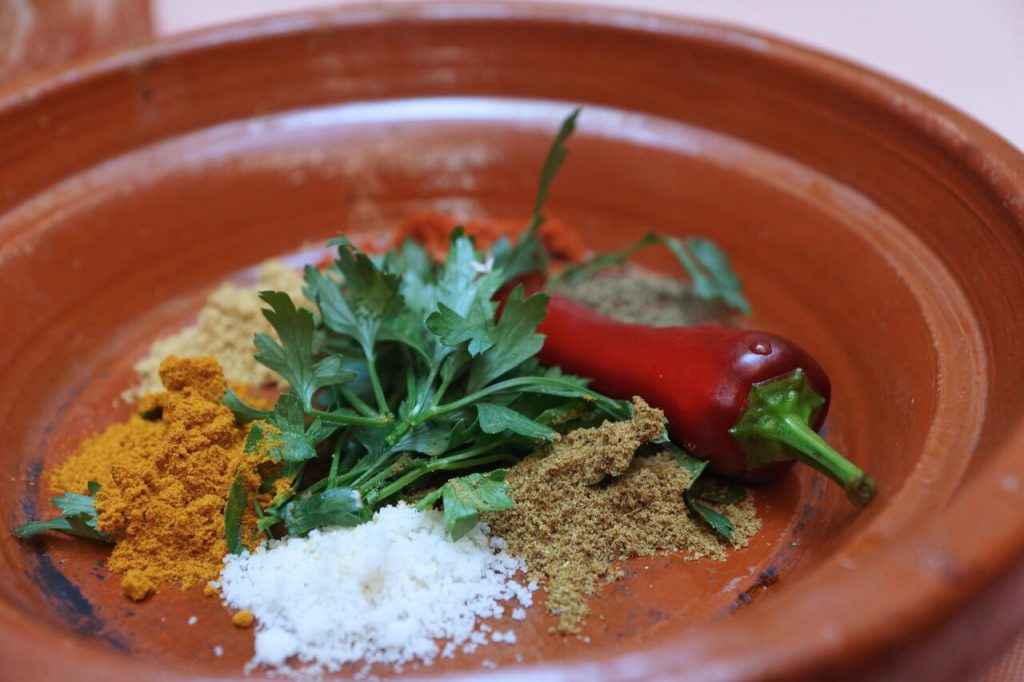 Try some delicious Moroccan food, such as tajine and mint tea. Or take a cookery class with a local and learn how to make local dishes for when you’re back home.

The collection of images at the Maison de la Photography is well worth a visit if you’re looking to find out more about life in Marrakech over the previous two centuries. Photos, postcards, journals and maps from well-known photographers and anonymous travellers make up most of the collection, which provides a somewhat romantic insight into why the city is still considered one of the most exotic in the world. 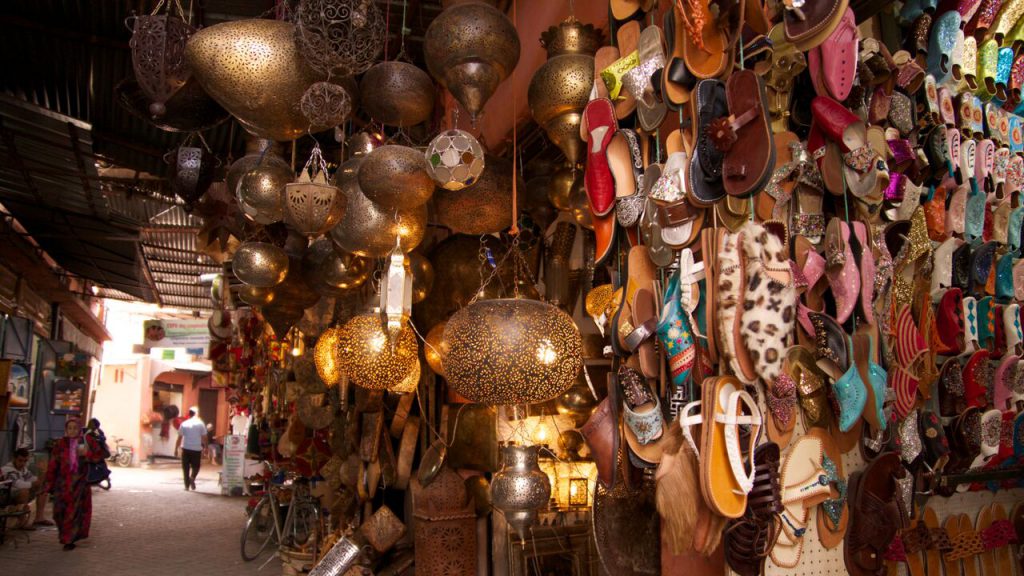 Shopping in the souks

In most of the major cities in Morocco you will come across an Ensemble Artisanal centre for craftsman. The Moroccan government supports these operations so that travellers can shop for traditional handicrafts and souvenirs without pushy salesman and for fixed prices. The Marrakech Ensemble Artisanal is extensive and located near the train station. If you want to know where else to get the best bargains in Marrakech, why not take a shopping tour with a local guide.

For anyone looking to do a little light exercise, try a gentle jog or a cycle ride through the 150,000 palm trees that line the Palmeraie on the outskirts of the city. This neighbourhood offers attractive walks, tranquil nature, camels and 5-star hotels to gawp at.

Looking for more things to do? Urban Adventures offers day tours in Marrakech and beyond, all led by local experts and that will give you a taste for local life:

Medina, Palaces & Tombs
With alleys within alleys, and lane ways that lead nowhere, navigating Marrakech’s medina alone is a one-way ticket to Planet Frustration. Join this Marrakech tour to see it all, minus the sweaty confusion and language fails!

Tajine Cookery Class
Receive a Moroccan masterclass on this Marrakech tour that will send you home with supreme, inside knowledge of tajine making and the delicate art of market haggling. Smug home cook alert!

A Taste of Marrakech
This Marrakech food tour will get you up close and personal with the food scene in this exciting city. Wander through the souks, sampling olives, dried fruits, nuts, pastries and other Moroccan specialities. Visit a local spice market and see the mouth-watering variety of food on offer in the iconic Djemaa El-Fna, then dig in to a traditional dinner.

Shopping Secrets of the Medina
Moroccan shopping doesn’t have to be a mystery — all you really need to master the medina is a local to show you how it’s done! Visit hidden stalls, shop for real-deal souvenirs like leather, lamps, shoes, carpets, spices, and argan oil, and learn to haggle like a true Marrakech insider. Bonus: we’ve even scored a few exclusive discounts just for this tour.

Watch for a sneak peek some of the delicious dishes you can try on our Tajine Cooking Class!

What’s on in Marrakech

The Marrakech Biennale takes place every two years from February to May, bringing artists together from around the globe with a focus on cutting-edge contemporary art, film and literature.

Car enthusiasts should add the FIA WTCC Race of Marrakech to their must-to lists, featuring an almighty supercar exhibition alongside an adrenaline heavy race around the city streets. Usually held in May.

The Marrakech Popular Arts Festival is a great way of exploring Morocco’s traditional Berber past, with folk music, dancing and performances popping up all over the city. The main events are held in the picturesque ruins of the Badi Palace in July.

If you’re a dance music fan, you should try to visit Marrakech in September so you can experience the Oasis Festival, which takes place at a luxury hotel with  beautiful views out to the Atlas Mountains.

The Sun Festival also takes place in September and is a must for music lovers, featuring local and international artists performing in some wonderfully atmospheric locations

Marrakech on the big screen 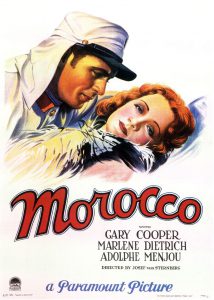 Movie poster from the glamourous 1930 movie, Morocco, with Marlene Dietrich and Gary Cooper

Marrakech has a rich movie heritage. Its exotic attractions have provided a backdrop to some incredible films over the years. There are too many to mention here but the following are our favourites.

For classic Hollywood enthusiasts, watch the glamourous black and white 1930 masterpiece Morocco, starring the delectable Marlene Dietrich and the equally gorgeous Gary Cooper, directed by Hollywood legend Josef von Sternberg. Alfred Hitchcock also used the city for his taught thriller The Man Who Knew Too Much, with James Stewart and Doris Day. Modern films that have used Marrakech as a backdrop include Hideous Kinky with Kate Winslet, and Martin Scorsese’s The Last Temptation of Christ. If you’re really into your movie locations, you should make a journey south through Ait Benhaddou to Ouarzazate where the likes of Lawrence of Arabia, Gladiator, The Jewel of the Nile and The Living Daylights were filmed.

Moroccan music has been influenced by the Berbers, Spaniards and Arabs over the years, all of whom have called Marrakech home at some point. Check out traditional Berber folk music or mystical Gnawa music, which originates in ancient Africa and was used to (amongst other things) ward off evil spirits.  For a Western homage to Marrakech, you can’t do much better than ‘Marrakesh Express’ by Crosby, Stills and Nash.

Lords of the Atlas by Gavin Maxwell tells the extraordinary story of the rise and fall of the power-hungry Glaoui family who ruled the city until 1956. Edith Wharton’s 1920 travel memoir and Elias Canetti’s The Voices of Marrakesh provide powerfully exotic descriptions of the city from its not too distant past.