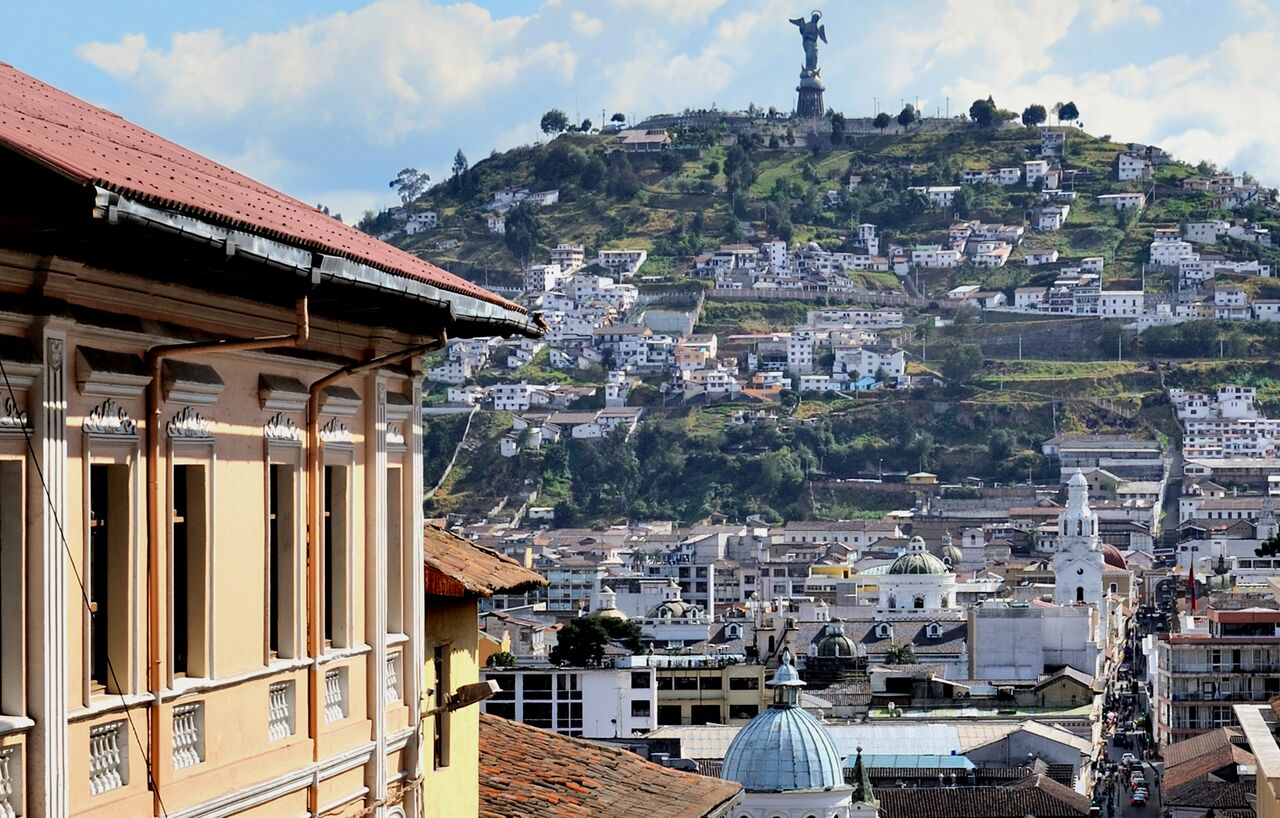 The complete guide to: Quito travel

Tucked amid a high Andean valley and flanked by majestic mountains, Quito is the world’s loftiest capital city, offering a UNESCO-listed old town of pretty squares and churches, a thrilling food scene and transport links to the world’s most spectacular scenery and wildlife. Get the most out of your trip to this sprawling city with our complete guide to everything you need to know about Quito.

Getting to and from UIO

A bus service leaves Old Quito Airport for the city every 30 minutes, 24 hours a day for USD 8. Taxis are a safe option, as long as you use yellow taxis with an orange plate and ‘transporte seguro’ stickers on the back window. The city has suffered with a slew of fake taxi operations in the past but they’re taking steps to address it, just be sure to be vigilant at all times. An average journey to downtown Quito from the airport will cost around USD 30.

You can easily walk around the beautiful old town of Quito and the Mariscal an Republica del Salvador neighbourhoods. If you’re looking to see more of the city than this though, we advise you to use public or private transport as its sprawl is nearly 42 kilometres long! The local bus network runs north to south and there are two main terminals. Carcelen in the north where you can catch a bus to Tulcán (for the Columbian border), Otavalo, the Mitad del Mundo or the Esmeraldas on the coast. Quitumbe is the terminal in the south connecting the city with Baños, Guayaquil and the Amazon.

The speedy and efficient El Trole (trolley bus) is Quito’s quickest and most fun mode of travel. Trolleys run along Av 10 de Agosto, through the old town and out to the suburbs, from 6am to 12pm. You can buy tickets directly at the stops for 25 cents.

Taxis are another cheap option that can take you directly where you need to go. Look for the official yellow vehicles with orange number plates and check that your driver is using the metre.

The construction of a metro service for the city is underway and due to begin operation sometime in 2019.

Things to do in Quito

Want to experience the arts and culture of Ecuador? Then you MUST check out the ultra-unique Museo Templo del Sol Pintor Ortega Maila, a temple housed in a volcanic crater. Ernst Stavro Blofeld would be proud! The space offers visitors an art gallery to wander around alongside a host of fascinating cultural experiences, including dance and music shows and aromatherapy demonstrations.

Opera, ballet and the Ecuador National Symphony Orchestra are great options for music and culture lovers in Quito. Locals and tourists alike flock to watch Andean dance performers in the city’s theatres. For dancing until daybreak, head over to the La Mariscal neighbourhood for trendy bars and jam-packed clubs.

Quito is famous for its mouth-wateringly good empanadas, quesadillas and tamales. Get an overview of the city’s impressive food scene on a food tour with a local guide. Don’t miss Iñaquito Market either, located in the northern part of the city. It is known for its exotic fruits, vegetables, medicinal herbs, fresh juices and locally made alcoholic drinks.

The Mitat del Mundo monument, which marks the middle of the world

Get out of the city for the day and visit the spot (now marked with a monument), where the original measurements were taken that eventually proved the Earth was round. The Intiñan Solar Museum is located nearby and is also well worth a visit.

The Museo de la Ciudad is a delightful museum located in the Old Town, opposite the Carmen Alto monastery, showcasing daily life in Ecuador over the centuries. Re-enacted scenes from the lives of Ecuador’s citizens include life in a 16th-century home and a bloody battle against the Spanish.

The tourist train or Trenes Turisticos en Ecuador is a must-do while in Quito. You’ll see mind-blowing vistas of the Ecuadorean Andes, learn about Ecuadorian culture and cuisine, and even see a live folk music show. The train service offers eight exciting day trips to choose from, including a visit to the famous Otavalo Market in the northern Andes. Or you could stop at the Devil’s Nose, the Avenue of the Volcanoes or explore some of the lush, tropical forest that runs alongside Pacific coast — the choice is yours!

Take a stroll around the old town streets into the openness of the Plaza San Francisco, revealing one of the best views in Ecuador: a sweeping cobblestone square backed by the twin bell towers of the country’s oldest church, the Monasterio de San Francisco.

Check out the Quito Cultura website for all the latest Quito event news.

Tip: Due to the altitude, Quito can be a little chilly in the evenings. Be sure to bring warm clothes so you can enjoy a night out in the city without freezing your pants off.

Looking for more things to do? Urban Adventures offers day tours in Quito, all led by local experts and that will give you a taste for local life:

Quito Legends and Culture Tour
Learn the legends of Quito on this tour that’ll get your hands dirty and your taste buds tingling! You’ll explore the city’s historic centre and hear the tales behind Quito’s oldest streets before getting a lesson in old-school woodcarving techniques, taught to you by local artisans. From there, it’s a sweet treat with a visit to a local chocolate factory and a traditional ice cream shop serving up crazy flavours you’ll only find in Latin America.

Quito Market Discovery
Wherever you go in the world, markets are the source of the freshest food around and Ecuador is no exception. Join this Quito tour to discover (and taste) the ingredients that go into the signature dishes of this region.

Condors and Culture in Otavalo
Embark on an adventure that showcases Ecuador’s diverse natural world and colourful culture. Take in stunning Ecuadorian vistas before visiting a rescue centrededicated to protecting and rehabilitating endangered birds of prey. Feast on local food served at a native house, and shop at a vibrant indigenous craft market on this tour brimming with culture, history, and wildlife!

Quito Sweet & Culinary Experience
Discover the colonial flavours of Quito on this culinary tour packed with sweet treats, mouth-watering pastries, and tasty tamales. Meet artisan bakers and talented cooks, admire the heritage-filled architecture of Quito, explore a local market, and learn the secrets to making Ecuadorian favourites in an informal cooking class in the home of a local family where there’s always something going on in the kitchen!

Quito on the big screen

A Tus Espaldas is a locally set movie about the social differences between the north and the south of Quito and features some stunning cinematography. If you’re looking to go full Hollywood, your best bet would be Proof of Life, a high-octane thriller starring Meg Ryan and Russell Crowe set in a fictional South American country. Most of the movie was filmed around Quito and the surrounding mountainous countryside.

We would recommend the Swing Original Monks, a Quito-based band that specialises in funk, San Juanito, Pasacalle, rock and pop rhythms. Pasillo is a genre of Latin music and is exceptionally popular in Ecuador; you’ll often her its distinctive sound coming from the bars and cafés in Quito.

60 Anecdotas Quiteñas is a great collection of local anecdotes on Quito. Study some classic Ecuadorian authors before you arrive; start with the country’s most notable 20th-century writer, Jorge Icaza, and his most famous work, Huasipungo. It tells of the exploitation suffered by the local indigenous peoples at the hands of their colonisers. Its English translation is titled The Villagers.