Blog > The Nepal most travellers miss: Exploring Patan and Bhaktapur 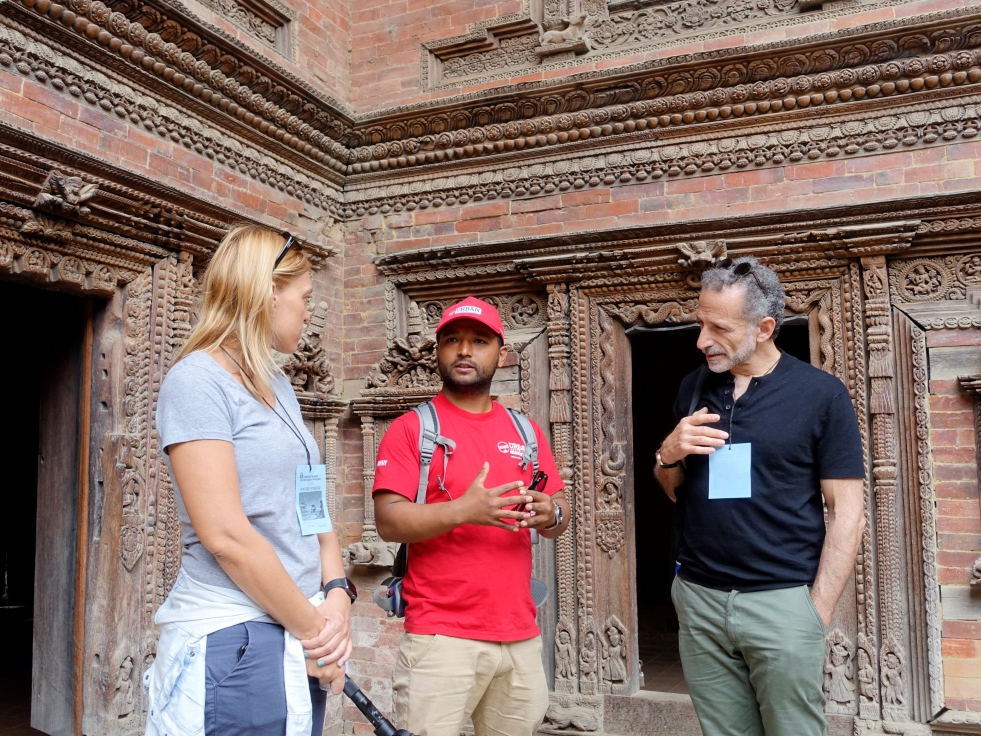 The Nepal most travellers miss: Exploring Patan and Bhaktapur

When travelling to a new country it’s easy to visit only the main cities and sites. But what about the areas that aren’t so well known? Are they worth your time and effort? I’m here to say for certain that yes, they are.

In Nepal, many travellers only base themselves in the capital of Kathmandu, paying little attention to the surrounding cities. And while Kathmandu offers a great dose of history and culture, as well as some incredible temples and shrines, I recommend you explore a little deeper and reach a little broader.

Patan and Bhaktapur are two former kingdoms located quite close to Kathmandu and definitely worth your travel time.

Beautiful temples are everywhere in Nepal | Photo by Rachel Davey

I travelled to Nepal many years ago and spent time in the mountains and national parks. Nepal is one of my favourite countries and the kind nature of the people is what enticed me to return. This time, however, I really wanted to understand and learn more about Nepalese culture.

Time was against me as I only had a limited stay in the city, so I decided to join a small group day tour to include the highlights of both of these ancient cities. I met our guide, Kishor, and a few other travellers at a hotel conveniently located in the bustling centre of Thamel, Kathmandu.

Located only six kilometres from Kathmandu is the city of Patan. It’s often described as “the city of living art.” As we strolled closer to Durbar Square (literally meaning Palace Square), I could instantly see why. The temples and shrines are captivating.

We entered the Patan museum, which features magnificent artefacts from both Hindu and Buddhist traditions. I hung on Kishor’s every word as he explained the span of civilisations that have prospered and competed here.

The intrinsic carving and scriptures etched into the stone and woodwork inside this temple left me open-mouthed, and as Kishor explained how even the smallest details inscribed in the temples were important, this revelation brought my imagination to life.

He explained how the king and queen used to reside here, back in the 16th century. He told stories and showed us the restored remains of the grand royal bath. This is where the king would bathe. Tall stone columns still stood here, and would have been covered in flowers and vines to decorate the room.

We saw the courtyards and rooms where the queen would have kept her royal gowns and shoes, her jewels and gifts from other kingdoms.

This information sent my imagination running wild. I could envision a moving picture of the king and queen strolling around this incredible temple. I could imagine the rich colours of their elaborative clothing and the jewels and precious stones they would wear to assert their position in a kingdom they were commanding.

After exploring Patan, we jumped back into our private van (quietly enjoying the comfort of the air conditioning) and drove about 45 minutes to the buzzing little city of Bhaktapur.

Entering the palace square felt very different to Patan. I watched as the morning sun danced off the walls of the temples. Locals were going about their daily chores in time with the constant sound of bells jingling, while street vendors peddled old wooden carts across the cobblestone ground, their carts full of trinkets and fresh vegetables.

READ MORE: Why Bhaktapur is a must-see city on your Nepal trip

My eyes were instantly drawn upwards as we found ourselves in front of the Nyatapola Temple. At 30 metres high, it towers above the market square. Kishor explained this temple was the iconic landmark and centre point of the city.

I could see that locals had already made daily offerings to either entice or ward off demons and gods. These offerings are typically small gifts of food and floral bouquets, often accompanied by sticks of burning incense.

I climbed to the top for fantastic views of the city below. I could have sat there all day and just watched the world go by.

Escaping the heat, we wandered through some small hidden alleyways; my nose led me toward a tiny hole-in-the-wall kitchen. I peered inside to find a woman cooking a stack of fresh chapati, along with the most fragrant vegetable curry. She smiled at me as she bashed down and stretched more dough.

Our tour quickly helped me understand what an incredibly complex history Nepal has endured. A mix of Hinduism and Buddhism is widespread here. Religion is a huge part of the lives of the Nepali people, and heavily influences their daily living.

I’d describe the cities of Patan and Bhaktapur as beautiful outdoor museums. There are temples and shrines as far as you can see, very impressive and unique from the outside, yet fascinating and different on the inside.

As I wandered along I realised that without my guide, I’d never have found these interesting and beautifully hidden parts of each of these cities. Uncovering hidden places, paired with the stories that Kishor told, became my favourite part of the day. It felt as if I was exploring with a friend — a friend who had all the answers and knowledge of the area that only a local could have. He offered answers to help me understand the culture that he is so very proud of.

I believe that sometimes when we travel, it’s easy to go through the motions, see the sights, read a few inscriptions on artefacts and snap a few photos. That’s the easy part. The thing I’ve realised during my travels, is that the more I see, the more knowledge I crave. This is a good thing, right?

History can be interesting, but only if you allow yourself to really understand it. I enjoy the expertise of having a local guide to fill in the missing pieces. I appreciate the explanation of the parts that are more complex for me to understand. I’m a firm believer that reading guidebooks and information about a country is always helpful to know before you arrive, but Kishor gave these cities life.

I feel that the remaining time I have in Nepal will be enriched by what I’ve learned today, and that is what travel is all about.

Explore Nepal beyond Kathmandu on our Patan and Bhaktapur day tour, with a local guide to lead your way.