Blog > How to do Toronto Nuit Blanche right 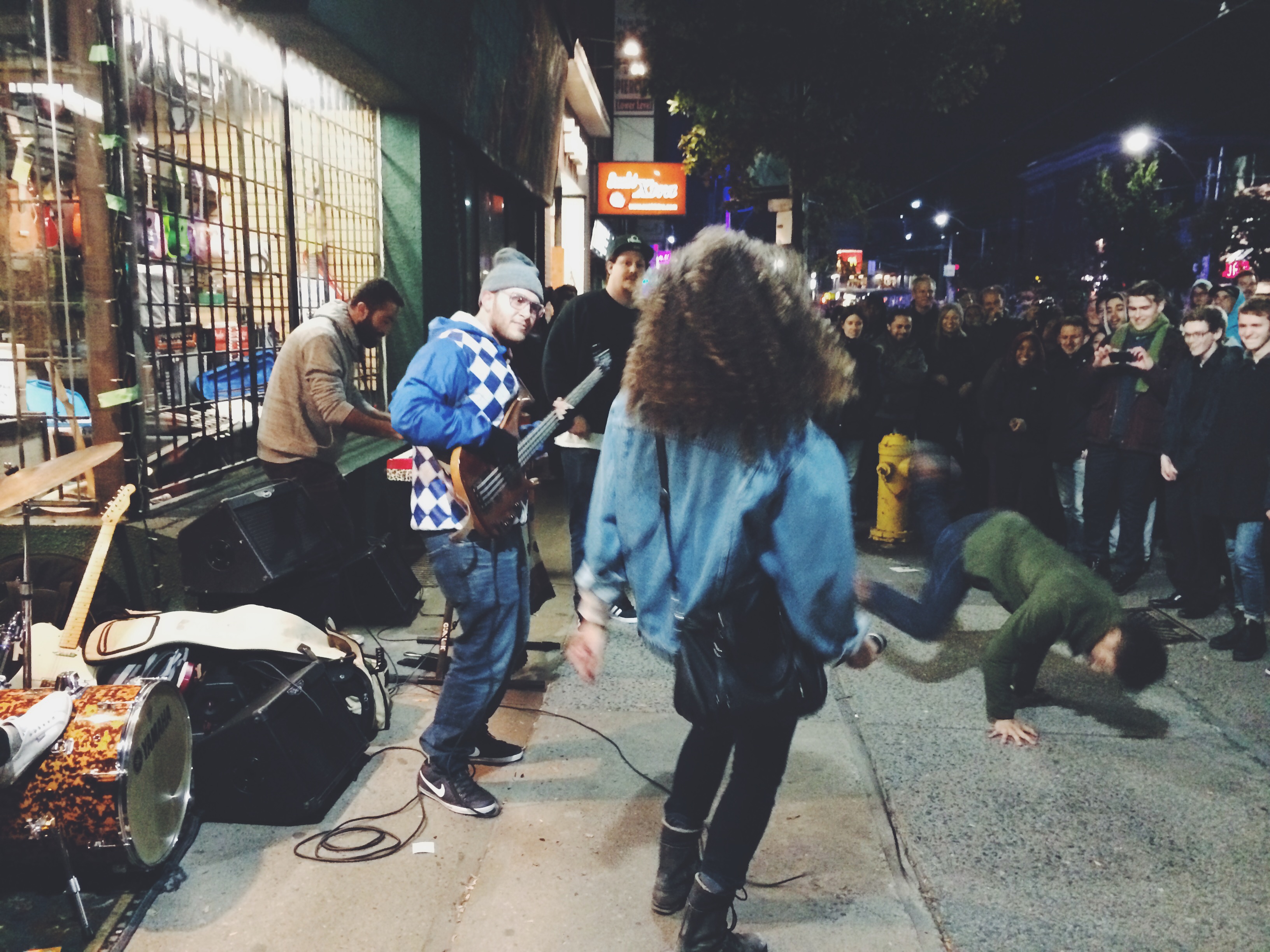 How to do Toronto Nuit Blanche right

Like many Toronto locals (or Torontonians if you’re feeling fancy), I’d never been to Nuit Blanche. Every year, it comes and goes, and we shudder at the thought of over 1 million people hitting our streets. Navigating Toronto on a regular day can be hard enough without thousands of gawking tourists, we think smugly. Then again, maybe that’s what it’s all about. Seeing your city in a different light – having that overwhelming Big City experience right in your own backyard – being a tourist at home. After reading through the Nuit Blanche Survival Guide that NB vet and Toronto Urban Adventures‘ guide James had wisely compiled, I figured I’d give it a shot. Here’s what happened:

As the buzz of Nuit Blanche hit the social airwaves, it was tempting to rush downtown and begin my night. Then I remembered the “no-crowd approach” and decided to take a nap instead.

Well-rested and raring to go, I hopped on the subway and headed down to the nerve-centre on Queen Street. The subway doors opened, letting out a number of early bird revellers. Their exhausted expressions as they clutched worn Nuit Blanche guides proved I had made a wise choice to start late.

As I walked up the stairs from Osgoode station, it was the noise that struck me first. An audible buzz – the odd squeal of excitement. At the top of the stairs, I was immediately swept into the madness. I looked at the crowd ahead and knew there was no turning back. Palm trees elevated into the sky by orange cherry pickers (The Gap Ecology) created an oasis above the urban landscape — as well as a major traffic jam as people pointed their phones into the sky.

At this stage, being alone had serious advantages. I could weave my way through the crowd at record speed, making use of the sidewalk while most people enjoyed the novelty of walking in the streets. I arrived at Steve’s Music where a large crowd was gathered around singing a raucous rendition of Biz Markie’s Just A Friend – I knew I was in the right place. As I worked my way through the crowd, I saw the familiar faces of Juice Money, a collective of young local musicians who gather only on special occasions such as these to showcase their revolving door of talent. As I took my place front and centre, apologizing to the folks behind for my rather obnoxious 5’11” stature complete with Pharrell hat, I got a shoutout from my friend and Toronto MC Dubby Free Lo and a nod from local producer Marlon James with an outfit that could kill and his finger on the bass.

This wasn’t just any busker show, this was an open jam – and anyone with the chops (or at least courage) was welcome to take the mic, take an instrument, and show the crowd what they could do. From rappers to breakdancers, beatboxers to soul songstresses, everyone took their moment in the spotlight. A man in a worn plaid shirt pushed passed me, mumbling “I got the chops” – that he did. Pulling a harmonica out of his hoodie, he brought some good ol’ fashioned blues to the sidewalk hoedown. You couldn’t help getting pulled into the vibe – the community spirit of the crowd brought out the performer in everyone. Somehow I found myself mic in hand, singing Aloe Blacc’s “I Need A Dollar” – but hey, “Buy the ticket. Take the ride.”, right? This is what Toronto Nuit Blanche is truly about. And you don’t need a map to find it.

Fuelled by good music and good vibes, I decided to head off in search of the art. I figured the crowds would be dying off and I might be able to check out some installations undisturbed. I was wrong. Line-ups were still long, but it didn’t kill my buzz. Instead I took the “go with the flow” approach, and enjoyed a leisurely walk down to Fort York for the Before Day Break exhibition. On the way, I talked to a guy in colonial dress jumping around in Kangaroo Boots, and checked out Anandam Dancetheatre’s Cascade which I had seen previewed at AGO First Thursdays a couple days before.

As I walked towards Fort York, rumbling ambient tones directed my eyes to a light installation. Melting Point arms the two former south-facing cannons of Fort York with “an artillery of glowing good feelings”. Good feelings in tow, I continued to Fort York. The air was getting colder, my hands wished for gloves, and it seemed high time for some quality street food. After scoping out the food trucks lined up along the grass, I settled on Berlin 95 for a taste of the Rhine.

Welcome to the highlight of my night. The crisp, juicy schnitzel perched atop a fresh bun with sautéed onions, mushrooms, thick chunks of bacon, and slices of ripe avocado sent me straight to foodie heaven. In between mouthfuls, I managed to direct people to sample this wonder like a sort of live sandwich board advertisment. If they slowed down to check it out, I made sure to give them a reassuring nod that they were in the right place.

By this point it was getting cold, my hands were fully numb – only temporarily warmed from the schnitzel. I needed to find shelter. I wandered through Fort York, stopping to check out an installation which I’d seen a year previously in The Israel Museum in Jerusalem. It was interesting to see this work which had been incredibly powerful in situ, reimagined in the fields of Toronto’s Fort York. A runway show of “fashion for Israeli checkpoints”, Chic Point presents garments pret-a-couture for exposing the “hiding ground” for weapons on Palestinian bodies. A lucky run-in with a friend who told me about a show down on Fleet Street and I was off to take cover in the Planeterraeum, a geodesic dome with live projections of Toronto streets. Another familiar face behind the decks, local producer Birthday Boy was filling the space with the right tunes to get us warmed up.

With feeling back in my hands, I headed out of the warmth and into the night. I was losing stamina, but my determination to see a few crowdless exhibits kept me going. I remembered James had said this was the beginning of the magic hour, when you could roam the streets in comparative peace. As I crossed over the Bathurst Street bridge, I was rewarded with an amazing view and managed to capture a Go Train speeding off into the night.

I rounded the corner of Phoebe Street, expecting clear sailing into the worldly exhibit I’d been waiting to see since the crowds deterred me at midnight – but alas, there it was…a dreaded line. It’s now or never, I thought. And so, the line I joined. It went surprisingly fast and before long, I was surrounded by 7000 inflated globes. One for every million people on earth. At once, tactile and magical, to Walk among Worlds was worth the wait. But I was starting to feel like one of the deflated globes. Still, there was more to see and I was determined to see it.

A quick trip to the Screaming Booth and I felt a little better, but it was definitely time to get home. I felt accomplished having survived my first Nuit Blanche without an explicative muttered. I hadn’t tried to see it all, I’d gotten the guide only to promptly lose it in favour of the go-with-the-flow approach. I had stayed fuelled, sampled various travelling group sizes, and skipped the line up. I turned my light off at 5:13am knowing that if there was one way to do Toronto Nuit Blanche, I had done it right.