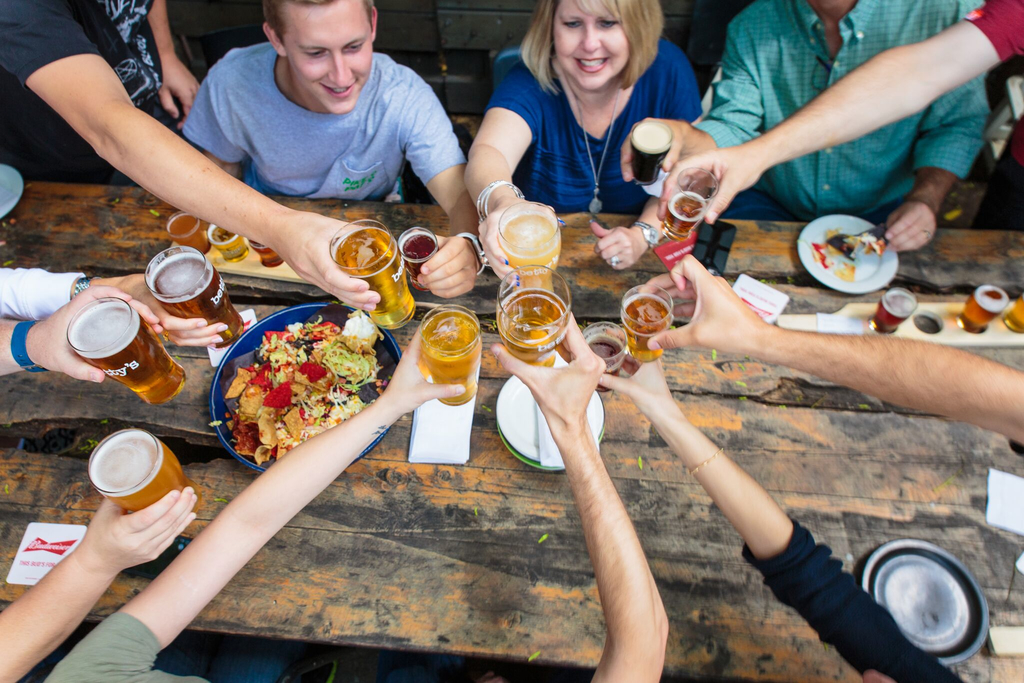 I arrive about three and a half minutes late, and it’s not enough that people are irate, but it’s enough that I know to give a yielding nod. We’re standing outside Toronto’s Hockey Hall of Fame and Jordan, our boisterous and charismatic tour guide, begins to paint a picture of a much different Toronto than I’d ever heard of. We’re transported back to the 1800s, to the rough and tumble times of “York” — a place where one can be sure the legal drinking age wasn’t 19.

Our group, at first, waddles down the street with Jordan as our fearless duck, and us as his slightly less fearless ducklings. We don’t know each other just yet, but if I’ve learned anything, it’s that if friendship is a canvas, then beer makes awfully good paint.

You get the sense that Jordan relishes this moment of suspension — the moment before he delves into a history he realises few of us truly understand. He’s got a bit of a knowing smile, and everybody feels they’re in good hands. It’s shortly after 2 in the afternoon — the perfect time for a nice, cold beer.

A different shade of Toronto

As it turns out, being born in a city doesn’t automatically mean you understand it. Growing up in Toronto gave me a cursory understanding of what made the city tick, but, ironically, it was leaving Toronto again and again that allowed me to truly grasp it. I’ve visited nearly 80 countries, and I’ve lived on a handful of continents (most recently in Istanbul from 2014 to 2017), and each experience provided context and contrast to my home city.

I could, if I wanted, read about Toronto’s history or, conversely, I can relive and reimagine it. A tour like the Beer Makes History Better Tour brings stories to life that you otherwise might never have heard.

You walk down streets you’ve walked down a thousand times and, all of a sudden, the smartphones, cars and flashing lights disappear, and you’re brought back to a time of beer barons, liquor moguls and delightful lawlessness.

The group of us, 10 in all, bumble down the steps into the darkened tavern, the perfect escape from the bright rays of the expectant afternoon. The group divides into two tables, and we peer over a beer list that would appease the palate of even the most pretentious beer aficionado.

I’m blown away by how quickly everyone ends up on the same page (and I’m not talking about the menu). What I hadn’t considered prior is that tours like these are so specialised that you end in a great position to get to know some like-minded people. By the end of the first pint, I swear we’re almost entertaining getting five different beers and sharing beers like a pleasant merry-go-round.

My fiancée Briana and I are seated with a family from just outside of Toronto. Dad had been given a heartfelt Christmas gift: three passes to the tour. It’s a real privilege to see how much he is relishing the experience, and how much his daughter and wife are appreciating his enthusiasm.

Before we know it, we’re off again down the busy streets of Toronto. All of us are relishing the notion that each passersby is in the midst of their afternoon chores, and we’re just in the onset of our reverie.

Jordan stops at landmarks I’d never stopped at before and pours out stories about names that sound familiar, but for which I’d surely need the help of Wikipedia to connect to any particular history. You see, there are those who merely recite knowledge, and those who speak with a contagious, educated passion, and Jordan is very much the latter.

His stories capture a time and place I know nothing about, despite growing up in the city. As it turns out, your local elementary school might not be teaching you about the Gooderham and Worts Distillery, which, in the 1860s, was the largest distillery on the planet.

We come back from the past, and take our places in the present. To celebrate our effective time travel, we head to another establishment with a lengthy history, and an enticing beer list.

Bri and I find ourselves in a booth with another couple around our age. The beer is on special so we decide that, to take advantage, it’s worthwhile to think in terms of pitchers as opposed to pints. We had met these two individuals entirely by chance, but you could have sworn it was fate. It is a marvelous thing to really meet someone. A tour like this gives you the chance to spend a few hours with someone and hear their story. How often in today’s world do we get the chance to chat with people for more than a few minutes at a time?

By now, the smiles are a little wider, the group is walking a little closer together, and Jordan is in his element.

A fine place in Toronto, indeed

When the sun is shining, the birds are singing, and the sun is setting, the Distillery District is a mighty fine place to find yourself. On historic beer tour, the Distillery District isn’t an unlikely place to end up, and I’m happy we head there. It also doesn’t hurt that we’ve just come from the St. Lawrence Market, a place that houses a cacophony of Toronto’s finest edibles.

When I was a kid, the Distillery District wasn’t a place you went, and, as far as I know, it was merely a giant movie set of sorts for production companies. Fast forward to present day, and you’ve got a beer and liquor lover’s playground. It hasn’t been all that long since I’ve moved back home to Toronto, so I’m taking a moment to appreciate what makes this city special. At the same time, Jordan is busy doing what he does best: taking us back in time.

A most natural place to find yourself on a beer tour: Toronto’s Distillery District | Photo by Toronto Urban Adventures

The tour ends at a drinking establishment nearby, and we’ve all enjoyed each other’s company enough that seven of us get a table and have a few more beers for good measure. Sure, we miss Jordan, our fearless leader, but we’d he has trained us well enough to fly on our own.

When you live in a place like Toronto, it’s easy to get caught up in all the things you have to do, and all the reasons why you can’t take the time to do a tour like this. But the truth is, you can. Life is all about saying yes to the things that pique your interest and not letting everything you have to do get in the way of the things you want to do. I’ve always felt that we’re our best selves when we’re learning, and continuing to expand our horizons. Imagine, you can do just that, with a well-deserved beer in hand.

Feeling thirsty? Hop on our Beer Makes History Better Tour for some historic tales and local brews in Toronto.

A local’s guide to Williamsburg, Brooklyn, NYC
What lockdown has been like in Philadelphia
The Best Way to Eat and Drink in Tbilisi – is With a Local
Ultimate Guide to Being Vegan in Philadelphia
Lonely Planet Best in Travel 2020: What not to miss according to locals