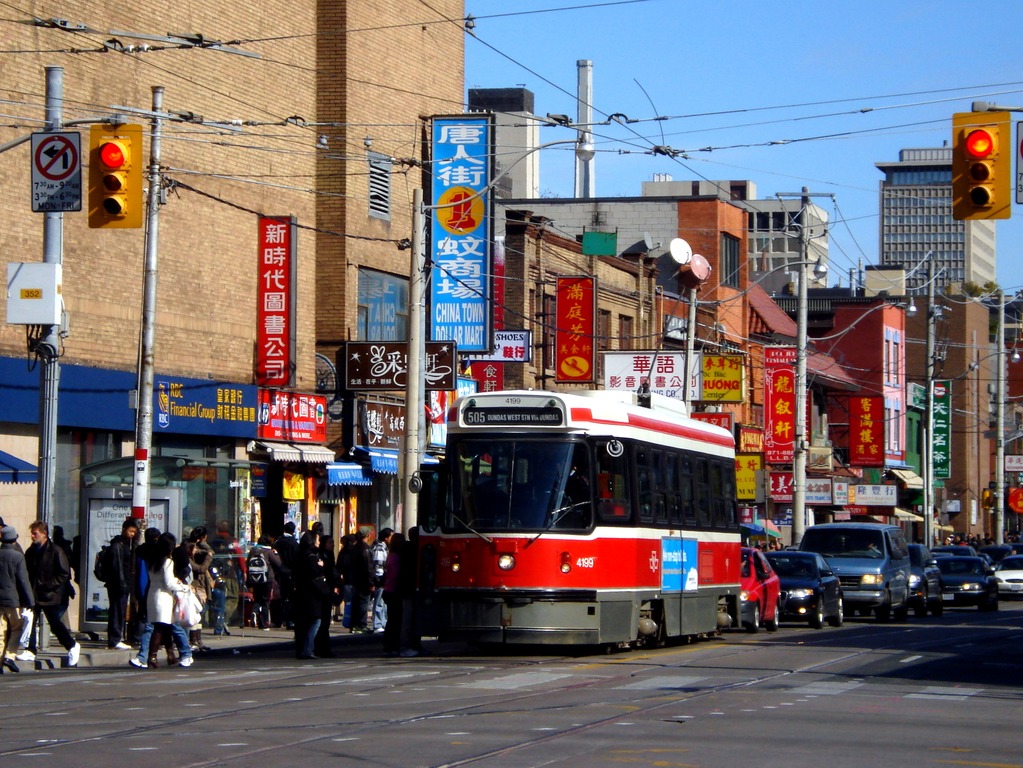 The complete guide to: Toronto travel

If you’re travelling to Canada’s biggest city and are in need of some help to plan your trip, read on! Our local Toronto tour guides have the lowdown on everything you need to know, from how to get around town, to the best sites to see, to what movies to watch to get you in the mood for a trip to “The 6.”

Getting to and from YYZ and YTZ

Taxis are easily available from both airports and can be called from the taxi stands on the arrivals level.

The Union-Pearson (UP) Express goes from Pearson International Airport (YYZ) to downtown’s Union Station in about 25 minutes. Trains come every 15 minutes and run between 5:30am and 1:00am daily. Price is CAD 12.35 for an adult one-way ticket.

Travellers arriving into Billy Bishop Airport (YTZ) can take the free airport shuttle bus that goes from the airport to the Royal York Hotel downtown (it’ll drop you off across the street from Union Station, where you can catch the subway to other parts of the city).

Toronto is big and busy, but getting around is relatively easy (although locals do love to complain about the unreliability of the local transit system). The Toronto Transit Commission (TTC) runs a series of subway trains, streetcars and buses throughout the city, with a few lines operating 24 hours.

Payment is accepted via cash, tickets or tokens, monthly passes and pre-loaded “Presto” cards. Travellers will most likely be buying tickets/tokens or paying cash. Fares are CAD 3.25 per adult, CAD 2.10 for seniors and students (aged 65+ and 13 to 19, respectively), and free for children aged 12 and under. Tokens are CAD 3 each (CAD 2.05 for seniors/students), and require a minimum of three to be purchased at a time. Tickets are sold in multiples of five.

You can also purchase a pass to ride all day for CAD 12.50, or a weekly pass for CAD 63 (good for two adults on Saturdays and Sundays).

Taxis and Uber are prevalent thoughout the city, with Uber being the cheaper option. Taxis are meter-based, and can easily be flagged from the street.

Bike-shares are available throughout the city, and cost CAD 7 for a one-day pass or CAD 15 for a three-day pass.

Toronto is extremely safe and is a great city to explore on foot, which will allow you to take your time and get to know the different neighbourhoods — the best way to get to know Torontonian culture is to just hang out and stroll through the various communities of the city.

Where to stay in Toronto

Our friends at Hostelling International are offering a 25% discount off Urban Adventures tours when you’re a HI member. If you need a place to stay while you’re in town, check out HI Toronto. Right in the centre of downtown and close to attractions like St. Lawrence Market and the CN Tower, HI Toronto comes complete with a rooftop patio, in-house bar serving up hearty food and live music, as well as daily and nightly activities like beach trips, board game nights and visits to the Distillery District.

Things to do in Toronto

You’ll have no problem finding ways to fill your days while you’re in Toronto. The city is frequently referred to as “a city of neighbourhoods,” thanks to the diverse communities throughout the city limits. Each pocket feels like its own small town — go for a walk or a transit ride across the city and you can end up in Little Portugal, Little Italy, Little Korea, Chinatown, Greektown, Little India, and more, all in one day. Beyond exploring the various cultures that call Toronto home, you can also check out numerous museums, festivals, sporting events and cultural happenings.

Sports are one of the best ways to feel connected to the city or even the country — especially when that sport is hockey. Arguably “Canada’s game,” it’s certainly the one the country is best at, and Toronto’s Maple Leaf fans are as loyal as they come (despite the team’s notorious losing streaks). #localsknow tip: As Leafs tickets are incredibly expensive (and hard to get), go to a Marlies game instead; the AHL team is a farm team for the Leafs.

Despite Canada’s reputation as a hockey country, when it comes to sports, lacrosse is actually Canada’s oldest and first national sport. Hit up a Toronto Rock game and you’ll see a lesser-known piece of Canadian sports history (and for a fraction of the cost of Leafs tickets).

Canadians (and Ontarians) can also partially claim basketball as their sport, as its inventor, James Naismith, is from Almonte, Ontario. Toronto boasts the only Canadian NBA basketball team (Toronto Raptors).

Other sports teams include the Toronto Blue Jays for baseball (the only MLB team in Canada), the Toronto FC for soccer/football, the Toronto Argonauts for Canadian football, and the Toronto Wolfpack for rugby.

Tickets for sporting events can range anywhere from CAD 7 for a baseball game to CAD 200 (or more) for a hockey game. Usually CAD 30–50 will get you some great seats to a fun event.

The best way to purchase tickets is from each team’s individual website, but the best info for all Toronto sports events can be found on the See Toronto Now website.

For art and culture lovers…

Toronto has an incredibly vast arts and culture scene — there are over 70 different museums and the third largest English -speaking theatre district in the world.

Some museum highlights would be the Royal Ontario Museum, the Art Gallery of Ontario, the Bata Shoe Museum, the Gardiner Museum of Ceramic Art, the Aga Khan Museum, the Ontario Science Centre and the Hockey Hall of Fame.

There are also always great Broadway and Off-Broadway shows playing in Toronto. A favourite among locals is the hilarious Second City Comedy Theatre.

The National Ballet of Canada, the Canadian Opera Company and the Toronto Symphony Orchestra are all also situated in Toronto.

Tickets range depending on the exhibit or show — anywhere from CAD 10 on the low end up to CAD 100 or more on the high end. To see what’s playing, grab a copy of NOW magazine (it’s free and available in countless cafés, shops, etc.), as it always has the latest theatre and concert listings.

The great thing about Toronto’s culture scene is that any major theatre show or art exhibit that comes to Canada is almost guaranteed to pass through Toronto. So not only do you get to see the best art and culture in the city, but in the world!

Looking for more things to do? Urban Adventures offers day tours in Toronto, all led by local experts that will give you a taste for local life:

Kensington Market & Chinatown
Skip the generic, tourist-trap sights and join this Toronto tour to see two of the city’s coolest communities. Hit Chinatown to see where China and Canada collide, then visit the Kensington Market area for graffiti, vintage shops, coffee houses, comic book stores, and everything else decidedly hip.

Beer Makes History Better
Through fire, war, depression, cholera, rebellion, and repression, beer has been there soothing the woes of Toronto’s people. Join them in historic pubs and hear tales of years gone by over a craft beer on this Toronto tour that proves that beer does indeed make history better (like that was ever in doubt)!

When Pigs Fry
This Toronto tour is of porcine proportions. Sample bacon, pork, and sausage, find out about ethical pig farming at a local butcher, and learn about the role of the pig in pop culture, or is that pork culture?

Hockey in Toronto Pop-up Tour
Discover the sights and sounds of Canada’s game by watching a live hockey match! This winter do as the locals do: bundle up, grab a pint of local craft beer, and go to an ice hockey game! After the game, grab some more beer and Timbits for the ultimate Canadian experience.

Watch for a sneak peek of all the porky goodness on our When Pigs Fry tour!

What’s on in Toronto

Toronto has amazing events happening year-round. Some highlights include the Pride festival in June (the third largest Pride in the world), the Caribana festival in July/August (North America’s largest street festival), the Toronto International Film Festival in September (one of the largest publicly attended film festivals in the world), the Nuit Blanche art festival in October and the Santa Claus Parade in November/December. The Canadian National Exhibition is a traditional carnival that pops up for two weeks at the end of every summer and is a beloved nostalgic event for many Torontonians. And of course, there are countless street fairs happening all the time. Most events are free or have a small admission price.

The City of Toronto’s Festival and Events calendar is the city’s most comprehensive list of events in the city. You can also check BlogTO or NOW magazine for a line-up of events happening while you’re in town.

Toronto on the big screen

Toronto is frequently called Hollywood North for good reason. Not only is one of the biggest film festivals in the world hosted here every fall (TIFF, or the Toronto International Film Festival), but there’s almost always a movie or television show being filmed in the city’s streets. Toronto is often used as a backdrop for other cities (it has stood in as Washington DC in Miss Sloane, as Chicago in both My Big Fat Greek Wedding and Chicago, and even as Midway City in Suicide Squad).

A few television shows and movies that were filmed in Toronto and are actually set in Toronto include Scott Pilgrim vs. The World starring Michael Cera, The F Word (known in some markets as What If) starring Daniel Radcliffe, Being Erica starring Erin Karpluk, and the Degrassi series, starring Drake and Urban Adventures’ own former social media coordinator, Sarah Barrable-Tishauer!

There are many different bands that call Toronto home. To get in the mood for a trip to the city, pop on some tunes by local musicians The Weeknd, Drake, Barenaked Ladies, Bedouin Soundclash, Kos, Blue Rodeo, Cancer Bats, Our Lady Peace or Rush. It won’t take much digging through their collections to find a few odes to the city in their songs — in fact, Drake even made the iconic CN Tower the cover image on his Views album.

As well, there are several Canadian artists who may not be originally from Toronto, but who have written songs about Toronto. Take a listen to Bobcaygeon by The Tragically Hip, On Yonge Street by Gordon Lightfoot or Ontario by Neil Young.

Toronto has a thriving literary scene, with many of Canada’s most beloved writers living in and writing about the city — Margaret Atwood (author of dystopian novel-turned-Hulu-hit The Handmaid’s Tale) lives in Toronto’s Annex neighbourhood and is a vocal spokesperson for the community. For a few other ideas, check out BlogTo’s list of the top 20 novels set in Toronto.

A local’s guide to Williamsburg, Brooklyn, NYC
What lockdown has been like in Philadelphia
A Simple Guide to Thai Temple Etiquette
Ultimate Guide to Being Vegan in Philadelphia
Lonely Planet Best in Travel 2020: What not to miss according to locals