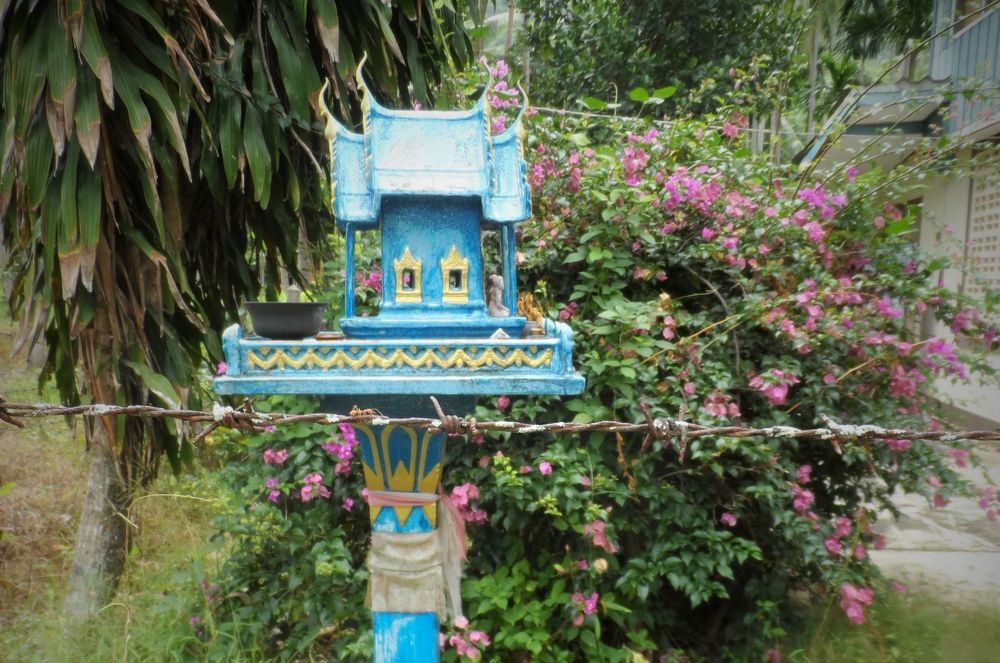 There is something in the air in Thailand. There must be. I have lived on and off — mostly on — in this beautiful country for more than four years now. From the moment I first got off the plane in Chiang Mai, a town nestled in the mountains of the north, there was a feeling, a trace of something inwardly palpable, surrounding me and dissolving slowly, leaving me feeling calm, connected and definitively lighter.

It was more than just the immediately noticeable slow pace and relaxed atmosphere, more than the friendly people and smiles from strangers, more than the tropical flowers and abundance of greenery, more than trips to waterfalls and scooter rides through rice fields to feed elephants, more than the constant heat of the sun on my skin.

It was a distinctly spiritual feeling that drew me in, and has kept me coming back.

You can see it in the serene faces of the Thai monks, clad in orange robes, spotted at temples or walking slowly through the streets, accepting offerings from kneeling followers in the early morning. You can see it in the children wearing tiny amulets for protection and good health. You can see it in the jasmine garlands, or phuang malai, hung from rearview mirrors in tuk-tuks and taxis for good luck — in fact, it is not uncommon for a driver to stop and purchase these flowers on the side of the road during your journey to ensure safe passage. You can see it in the thin sticks of sweet-smelling incense, burning in front of many homes and shops, and in the bright cloth ribbons tied around sacred trees.

It is impossible to spend time in Thailand without noticing the overarching importance of spirituality in the culture. The vast majority of Thais are Buddhist, estimated at more than 90%, and Buddhism is clearly intertwined within almost all aspects of Thai life.

However, even before Buddhism took hold in Thailand many centuries ago, spirit worship, or Animism, was practiced widely by the people of Southeast Asia, including in present day Myanmar, Cambodia and Laos. Many Thais, perhaps it is even safe to say most, believe in a spirit world. These spirits, or phi, must be respected and are capable of bringing blessings and good fortune to those who appease them — and destruction to those who ignore or disrespect them. Knowledge of these spirits has been passed down in folklore for generations, and has stood the test of time and the wave of modernity sweeping this rapidly developing country.

READ MORE: A local’s guide to Loy Krathong and Yee-Peng in Chiang Mai

The two belief systems have developed simultaneously and become neatly integrated within daily life. Frankly, it can be confusing for the casual observer, or tourist, to distinguish between all the practices and rituals carried out in plain sight or in private, stemming from a mixture of Buddhist, Animistic and Hindu beliefs. For me, it is exactly this ancient blend of spiritual harmony and ritual, though complex and admittedly somewhat over my head, that makes Thailand so mystical, and beautiful.

One of my favourite, and one of the most eye-catching and prevalent displays of spirit worship in Thailand are the ornate spirit houses found throughout the country, from the modern metropolis of Bangkok, to famous island destinations in the south such as Koh Samui and Koh Phi Phi, to the small villages and rural countryside of the north populated by farmers and local hill tribes. In Thai, known as san phra phum, these colourful shrines for the guardian spirits of the land are typically situated in front of homes and businesses, including most restaurants, resorts and shops, and even in public places such as parks and roadsides, as a gesture of good will towards the spirits that reside there.

Spirit houses are built both as a shelter to the spirits, and as a means of asking permission for use of the land. The spirits are provided the house to live in, so as not to dwell in the home or shop. Additionally, Thais honour certain spirits thought to aid in business matters, offer protection to natural surroundings, ensure a plentiful harvest, and even watch over motorists to prevent accidents on the country’s dangerous curving roads.

The shelters, which at first glance look like doll houses or miniature temples raised on pillars, can be simple or heavily embellished, and made of wood, concrete or brick. They should be constructed by an expert, and placed in a location where they will never fall in the shadow of the main building. Since there are many rules to be followed when erecting a spirit house, often the landowner will call upon a Brahman priest, or sometimes a Buddhist monk, familiar with the rituals to assist. The priest will also perform a formal ceremony to invite the guardian spirits into their dwelling, and determine the best day to do this, taking into account particular days of the week and numerical dates that are considered lucky.

When it comes to decoration, there is an element of creativity, and even play. A peek inside will often reveal little figurines of animals and people, and sometimes an arrangement of tiny furniture, all to the amusement of the spirits.

Beauty and intricacy aside, what stands out most to me about these structures are the offerings made daily, in the form of incense, candles, flowers, food and drink. It is typical to see food ranging from pork and rice to heaping plates of fresh fruit and water to sweets or crisps packets, always arranged neatly, often with cutlery and straws provided for a convenient dining experience. The silhouette of a spirit house | Photo by Cati Vanden Breul

There seems to be a certain amount of freedom in what one gives to the spirits, perhaps dependent on their mood that day. Some of the quirkier gifts I have seen are an unwrapped McDonald’s chicken sandwich with open ketchup packet placed on top, Fanta after Fanta (these, particularly the red and green variety, are actually incredibly popular, but always make me smile!), and open bottles of whiskey — commonly Thailand’s Hong Thong or Blend brands — for those spirits who enjoy imbibing spirits of their own.

These offerings are so ingrained in the culture that even if there is not enough space for a spirit house, or if it is too expensive, a home or business owner will often construct a makeshift altar of sorts on a small table or sidewalk, where they can pay similar respect.

I have always found part of Thailand’s charm to be its adherence to ancient tradition in the context of its modern development. Even in the short time I have lived and worked here as an English teacher, I have seen the construction of a number of huge multistorey shopping centres with expensive chain restaurants, cinemas and brand name retailers aplenty, as well as new condominiums springing up everywhere. Not to mention the rise, fall and remodelling of countless number of independent businesses — commerce seemingly in constant flux or expansion everywhere you go.

A Thai friend of mine, the mother of one of my students, addressed the issue, telling me that although the lifestyle for many in the country has changed, and some younger Thais may not adhere to rituals as strictly as the elders, they still believe and respect in the traditions passed down from their ancestors. Thais learn from a young age to worship and respect the spirits around them, and hope by honouring these beings to bring peace and prosperity to themselves and their loved ones.

Luckily for those of us expats and tourists, testaments to their dedication, such as spirit houses, can be seen all over and are an enduring reminder of the beliefs that have molded the culture of generations.