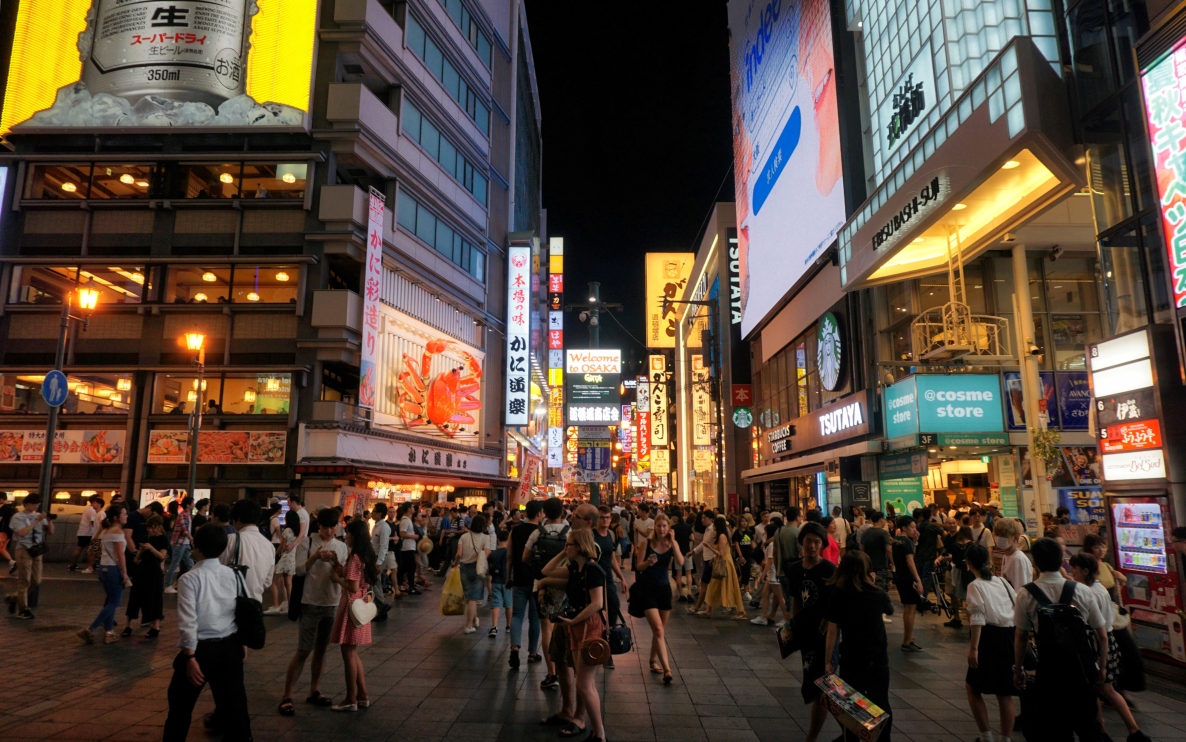 Osaka is a cosmopolitan metropolis of nearly 2.7 million people and Japan’s third largest city. Primarily a commercial port city, it is also one of the country’s most underrated destinations. Located just an hour by train from Kyoto, Osaka has a bustling nightlife, gritty vibe and friendly, down-to-earth people.

Known as the “nation’s kitchen,” Osaka has the country’s best street food including okonomiyaki (a savory pancake), takoyaki (octopus wrapped in rice flour balls), and kushikatsu (fried meat on a stick). We met up with our Urban Adventures tour guide, Rica, to try some of the city’s tastiest bites. She and I coincidentally lived a few blocks away from each other in Brooklyn, New York, and shared a love for the same local restaurants and bars, so I knew we were in good hands.

Our first stop was one of the must-visit attractions in Osaka, Kuromon Ichiba Market. Operating for over 170 years, many local chefs and homemakers come here to buy fresh meat, vegetables and fruits at over 170 shops selling goods throughout the 600-metre-long hall.

While walking past the stalls, we saw baby octopus stuffed with quail eggs, sea urchin and a few puzzling items I’ve never seen before. We stopped for some oden, a soup-like dish with various ingredients like fish cakes, radish and boiled eggs. Rica picked out a few ingredients on a stick and although piping hot, the vegetables marinated in the broth were addictive.

In search of something sweet, we tried dango, a soft ball similar to mochi and sugared like a donut that tasted just as good as the ones fried in America. There were dozens of enticing options at the market, including scallops grilled with butter and garlic, and Kobe beef cooking on the grill. I could have spent half a day sampling everything I saw, but we had more to see.

We took a stroll through Denden Town and marveled at the area unique to Osaka. Buildings were packed with loud pachinko machines, arcade games, bizarre maid cafes and anime shops or “geek shops,” as the locals call them.

Near the photo-worthy Tsutenkaku Tower in Shinsekai, we stopped and sat down for kushikatsu, meat and vegetables fried on a stick. This dish was created and made famous in Shinsekai and is served with a black, salty communal sauce that has a very strict no double-dipping rule. We tried beef, chicken, egg, shrimp and lotus root, and finished it off with a fried banana topped with chocolate.

Kushikatsu is fried food (could be beef, chicken or watercress) on a stick | Photo by Patrick Sgro

By the time we resurfaced, it was dark out and Shinsekai was in full swing. Gawking at the bright signs and bustling restaurants kept us occupied until we found our way to our next destination: the world-famous Glico sign in Dontobori. Kind of like the Times Square of Osaka, Rica explained that the Glico man has become the symbol of the city and has been hanging in this spot since 1935. It’s an advertisement for an iconic sweets company and is a sight to see lit up at night. It’s a tradition to take a photo in front of the sign with the same pose at the Glico man, arms and one leg raised. It may feel silly, but don’t worry, everyone around you will be doing the same thing.

Our guide recommended crab from a packed spot on the corner, and led us through the Namba shopping arcade for Osaka’s viral sensation, the Rikuro Ojisan cheesecake shop. The warm cheesecake jiggles because it’s made mostly of egg rather than cheese. Typically, the line stretches down the arcade, but tonight I took advantage of the short wait and jumped behind an excited group of teenagers.

READ MORE: Why Osaka is every foodie’s dream city

When it was time to part ways, cheesecake box in hand, Rica suggested a few places in the American-Mura area known as the American Village to grab a highball, a Japanese whiskey drink, or a local beer. Since the 1970s, this neighbourhood has been the epicentre of hip youth culture in Osaka. You used to be able to find plenty of imported American goods, hence the name, but now it is full of thrift stores, cafes, art and bars. It’s the perfect place to grab a drink and do some people-watching in Japan’s quirkiest city after an epic day sampling some of its best-loved local foods.