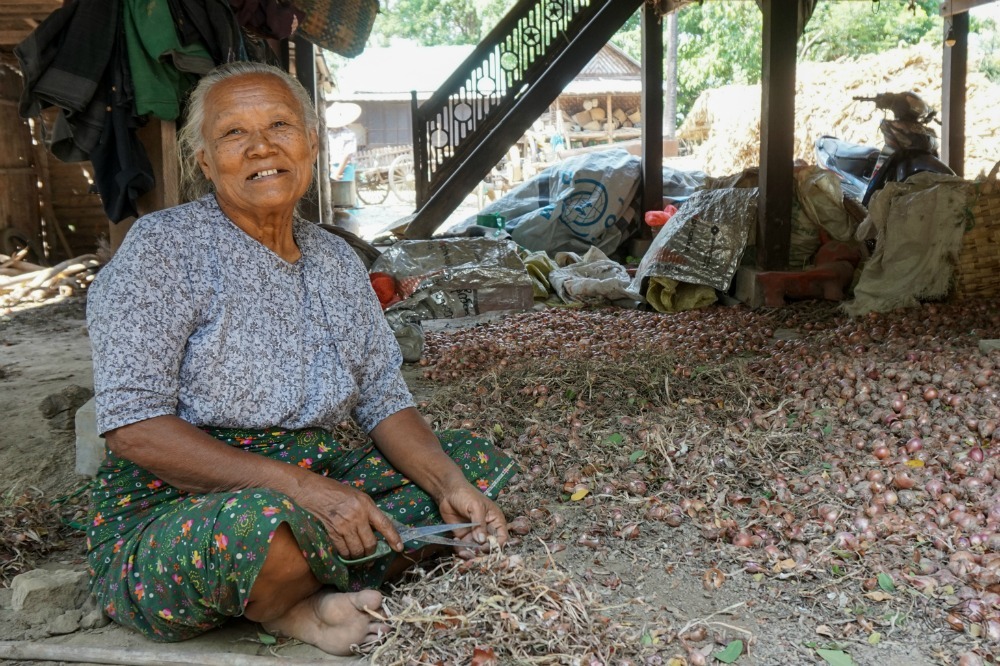 The ancient city of Bagan is one of the biggest tourist draws to central Myanmar. Visitors spend their time meandering around the sandy landscapes on e-bikes, exploring temples and ruins of former glory, and climbing up to vantage points for stupa-dotted sunrises and sunsets. It’s an epic travel experience that really deserves several days of your time.

But like with many big tourist destinations around the world, people come and then go, and in the case of Bagan, most people leave without seeing what life is like beyond the Archaeological Zone. When I learned of Urban Adventures and their tour that takes visitors beyond Bagan to the remote community of Kyunkalay to learn more about village life, I knew I had to experience it for myself.

On arrival, we were met by the head of the village, Mr. Myint Naing. He has a bright smile and youthfulness about him, and our local guide, who has visited this community on several occasions before, still finds it quite perplexing that the ‘most handsome man in the village’ remains unwed.

Most of the 270 people of Kyunkalay village are farmers, cultivating various types of beans, eggplant, cucumber, chili, maize, tomatoes, peanuts and a little bit of onion, the last being difficult to grow there. They keep some of the harvest for consumption, while the peanuts, beans and maize get sold at market at the nearby town of Pakokku about a 45-minute drive away. As we sat under a large, thatched roofed structure, a small group of women put the final touches on lunch, using some of those very ingredients.

The women prepare to serve lunch | Photo by Jessica Korteman

This tour by Urban Adventures already felt different than other tours we have been on. This wasn’t a commercialised tour and rather than ‘putting on a show’ for visitors, the local villagers simply went about their day in the way they usually would. In fact, while being warm and friendly, they were so nonchalant about our visit that it had me grinning from ear to ear. This was the kind of sustainable community tourism I could really get behind.

Chatting with Myint Naing, we learned more about village life. As the head of the village, it is his duty to settle any issues in the community. “It’s actually an easy job,” he says. “No one fights here. We all love each other like one big family. I’ve never had to intervene in any disagreement during my four years as head of the village.” His biggest job, he says, is to report goings on in the community to the government, such as what kind of damage they have incurred after natural disasters.

Floods are their biggest challenge, he tells me. With their low-lying landscape and the river less than a mile away, they must deal with floodwaters every rainy season. When they do have floods, the water can be several metres high and take about two months to recede. It suddenly became apparent why all of their dwellings were on stilts. Government reporting does not guarantee assistance, however, often leaving the community to make their own ends meet.

Currently all of the 47 children in the village attend elementary and middle school in a nearby village, just over a mile away. This means it is easy for the children to go by bicycle. However, only a small number are likely to go on to high school as they will have to commute further, and going to university doesn’t have much meaning, especially to the men, who typically need to become farmers after graduation anyway. This is a difficulty that plagues young people all over the country. There just aren’t jobs for graduates, so even the brightest students end up going back to the traditional family business.

Getting to experience thanaka, a paste made from tree bark, and applied as a cooling sunscreen and beauty product | Photo by Jessica Korteman

Urban Adventures has joined forces with ActionAid Myanmar to support the Kyunkalay community and their development needs. I spoke with Ms. Sukyi, who has been working at ActionAid Myanmar for four years, and works in 30 villages, including Kyunkalay. “Each village has different problems,” she tells me. “This village has too much water, while others not enough and they have to buy it.” She says her main work revolves around assisting communities to get access to work and education, and promote sustainable development and women’s rights.

Ms. Sukyi of ActionAid Myanmar tells me about her work in rural communities, including Kyunkalay | Photo by Jessica Korteman

“Women don’t rely on men in Myanmar,” she says. “They work in farming and other hard labour jobs.” But she wants to empower them, to help them make more money and improve their conditions. While women participate equally in the day-to-day running of the village, they have no confidence to go to village meetings. Part of her work is to educate women and encourage them to participate in decision-making. “A female perspective is beneficial to everyone.”

The reason why locals participating in activities like the tours organised by Urban Adventures is so important is that they can have access to another method of income, instead of having to borrow money. When the village has adverse weather, a lot of equipment that they use for farming gets destroyed and they need to somehow find the money to replace it.

Sukyi explains that the government has a distrust of NGOs, so reporting on their activities and what is needed is difficult. She says that some unscrupulous organisations just take photos of “projects” they are doing but don’t actually give anything to the people. It’s become a real challenge to convince the government of their genuine work in communities and to receive funding.

The government does sometimes visit the village, but usually only around election time. In fact, the solar panels you can see on each of the houses were put there by the government; a tactic often used to garner votes. While solar panels seem like a useful and sustainable addition to village life, especially as the village otherwise doesn’t have electricity, a number of them no longer work. That’s because each of the batteries is only built to last one or two years before they need to be replaced. At a cost of 80,000 kyats (around USD 60), it’s simply too much for villagers to afford.

Yin Yin Aye was born and raised in Kyunkalay village. At 25 years of age, she is now married with a four-year-old son. Having lived in Kyunkalay all her life, she knows well about the challenges of village living. Unable to find good-paying work in Myanmar, her husband is currently working in the sugarcane industry in China.

Yin Yin Aye and her son | Photo by Jessica Korteman

Yin Yin Aye wakes up early every morning to prepare breakfast for her son and offerings for the one monk who lives in the village, before setting out to the fields herself at 7am. She usually works alone, she tells me, although sometimes friends join her. She mainly cultivates maize and various kinds of beans, some she uses for cooking, while some she sells.

With a break during the hottest part of the day, she usually finishes at 5:30pm, but it depends on the season, she says. “With that kind of schedule, how did you even have time to find a husband?” our guide quipped, to an uproar of laughter from the women tidying up after lunch.

Yin Yin Aye, who left school in the 6th grade to farm, says she much prefers doing work for the small tour groups who visit the village as part of the Urban Adventures and ActionAid Myanmar initiative. “Working in the fields is tough, and this way I can stay in the village with my son some days and do work I enjoy.”

Currently the village sees one to two groups a month during the low season, and three or four during high season. Yin Yin Aye says she uses the money she earns from cooking for visitors to pay for healthcare, food, her son’s future education and also donations for community projects.

The villagers like it, she tells me, when guests book an overnight stay, as this gives them more opportunities to work and earn an income. Each visit creates various jobs, such as meal preparation and oxen cart transport, and along with paying locals for these services, part of each visitor’s tour fee also includes a community contribution that goes towards ActionAid Myanmar’s development activities in the community.

Yet despite the benefits of the tour groups, Yin Yin Aye worries about the stability of the tourism industry in Myanmar in the future. Seemingly well versed in international politics, she laments the tensions between North Korea and the U.S., saying that she fears if such tensions escalate, perhaps people will stop travelling altogether. She also noted the current political climate in the U.S. and a drop in the number of American tourists visiting. “I want to be able to do this kind of work for as long as I can. I hope that people will still visit my village.”

With Ms. Sukyi of ActionAid Myanmar and the village women who participated in jobs related to our tour | Photo by Jessica Korteman

One thing that remained clear through all our discussions was the need for an ambulance. Currently the village doesn’t have any vehicle to transport patients to the nearest hospital 45 minutes away. In emergencies, they must call another village for help, and they are completely reliant on their response. Oftentimes, it can take far too long for help to arrive. In some cases, villagers die waiting, especially after snakebites, a not so unusual occurrence in arid farming country.

“This is my dream for them, to have an ambulance,” says Ms. Sukyi of ActionAid Myanmar. “With any luck, through these community contributions, one day they will have one.”

Please note that Urban Adventures are no longer operating this tour, but we have partnered with Friends International for the Myanmar Crisis Appeal 2021. You can also check out our range of Myanmar tours with Intrepid Travel here.