Blog > All the fun with none of the scams: The ultimate Bangkok tuk tuk experience 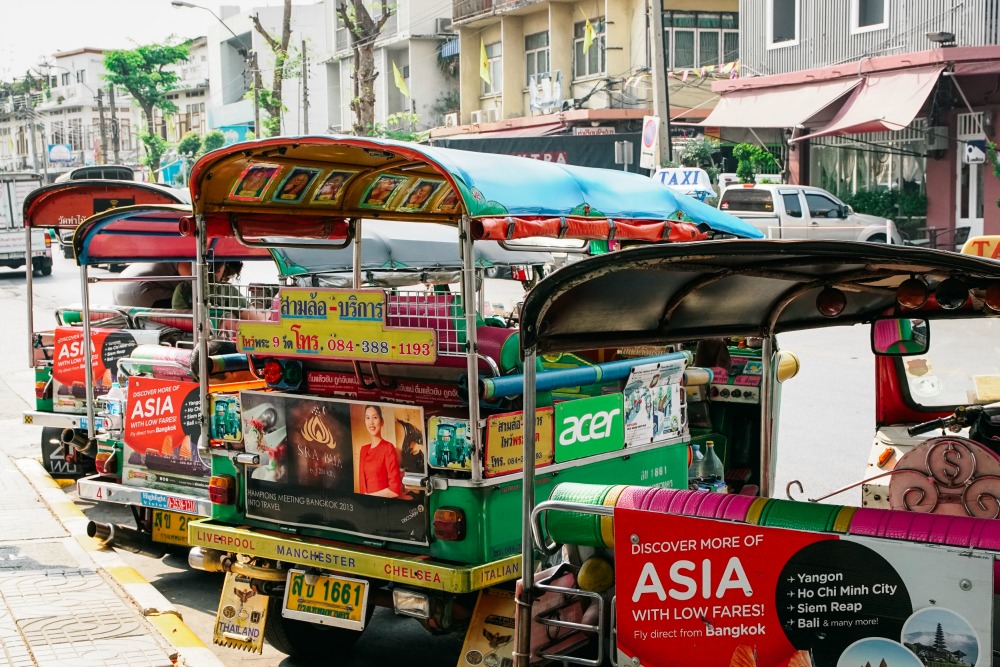 All the fun with none of the scams: The ultimate Bangkok tuk tuk experience

Ah, tuk tuks. Chances are when you think of Thailand you’re probably conjuring up images of this iconic little motorbike/rickshaw hybrid zipping between cars at the speed of light. Colourful, fast, and with a smattering of thrill-seeking they just scream adventure (which we love!).

Sadly though, with popular tourist attractions also comes popular tourist scams, and in recent years the humble tuk tuk has become infamous as a trap for unsuspecting travellers. Wanting to sample some of the craziness of Bangkok’s busy streets but definitely not wanting to get caught up in a scam of our own, we “tuk” to the road for a day with Urban Adventures to have all the fun minus the crooked deals.

We meet our guide, Gof, and at 8:30am she’s already spritely and raring to go. She waves out the door of the hotel at three lime-green tuk tuks idling down the street. They roar to life at her call and stop right before us in what seems perfect race-car starting grid format. This is what squad goals are made of.

“These are our tuk tuks for the day, two travellers per driver.” She smiles at the group before adding that our first stop is just five minutes away. After a quick warning to keep our bags between our legs to avoid any thrifty fingers that might pull up alongside us, we’re set. All aboard!

Our driver is the taller of the group, and he beams a warm smile at us as we move towards our vehicle. As we clamber aboard he quickly spins in his seat, extending a hand to cover the roof above to ensure we don’t have any undue concussions today. The tuk tuk — his pride and joy — is adorned with trinkets of Buddha, images of King Rama IX, and welcome messages. We even have ‘air-con’ in our open-air ride: a fan in front of us whirring to life to prevent any steamy Bangkok air hanging around too long. Inside our tuk tuk | Photo by The Common Wanderer

Before long we’re darting in and out of traffic on the manic streets of Bangkok. First stop is Phra Sumeru Fortress, which has already blown our minds early in the game considering we didn’t even know an ancient fortress existed in Bangkok. Standing guard over the northern Khao San road area of the Chao Phraya river (or ‘River of Kings’), the fortress was built by King Rama I in 1783 and is one of only two left standing from the original 14.

Once a vital and imposing defense structure, today the fortress is a public park where visitors can hide out from the chaos of Bangkok’s streets and enjoy the calm leafy shade instead. As we pass by, a group of high school art students busily sketch away quietly, images of the fortress and river coming to life before our eyes.

Climbing back in our tuk tuk, our driver grins at us in the rear view mirror before taking off for the Amulet Market. Despite his careful handling, our motto for the day is ‘hold on tight.’ Wrapping our hands around the safety strap hanging from the roof, we can’t help feeling like we’re in a more fun version of a car chase as we zip quickly between buses and around bends. In the blink of an eye, we come to a halt outside the Amulet Market, Thailand’s oldest and largest bazaar for small, spiritual talismans. We wind our way through the maze of amulets, charms, sculptures, and local medicines, watching as shop owners inspect their wares through magnifying glasses. 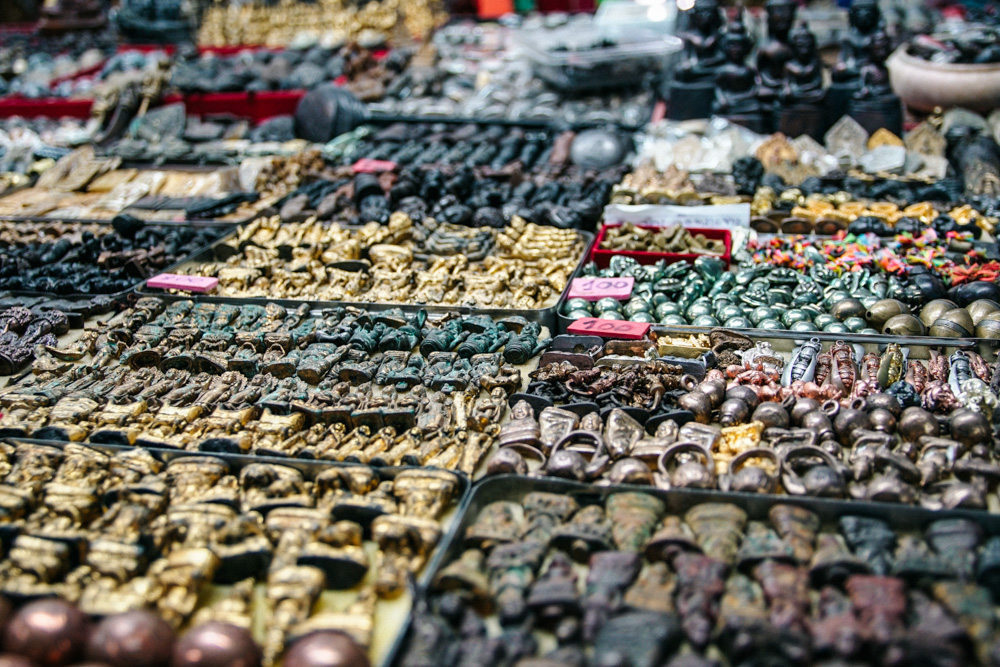 Gof explains that most Thais believe wearing a Buddha image amulet (or one of a highly-respected monk) brings protection to the wearer, and she stops to point out different versions along the way. She opens her own wallet to show us a Buddha amulet on a colourful cord; “I bought this from here,” she says. “It brings me good fortune!”

A small Buddha image isn’t enough for us today and before long we’re back on our tuk tuks and pulling up at the gates of Wat Pho, famous for its giant reclining Buddha (and crowds!). The term ‘giant’ isn’t used lightly here either — at 46 metres long the image is almost as long as an Olympic swimming pool, and towers over us at an impressive 15 metres high.

The many spires of Wat Pho | Photo by The Common Wanderer

Before long we’re climbing back into our little green squad cars and racing off to Little India. Walking through dizzying alleyways, the colours of marigold garlands, bright textiles, and ornaments are a feast for our eyes, while wafts of incense float under our noses. After a while Gof asks if we’re hungry. We nod. We’re always hungry.

Grinning, she announces that she knows where the best samosas in all of Bangkok are, before adding in a whisper, “you haven’t done Little India right until you’ve had these.” Following her gaze to the end of a nearby laneway, we discover a lady making our favourite tasty fried pockets fresh in front of our eyes. They smell like heaven, and she’s won our samosa-loving hearts over. We’ll take five! 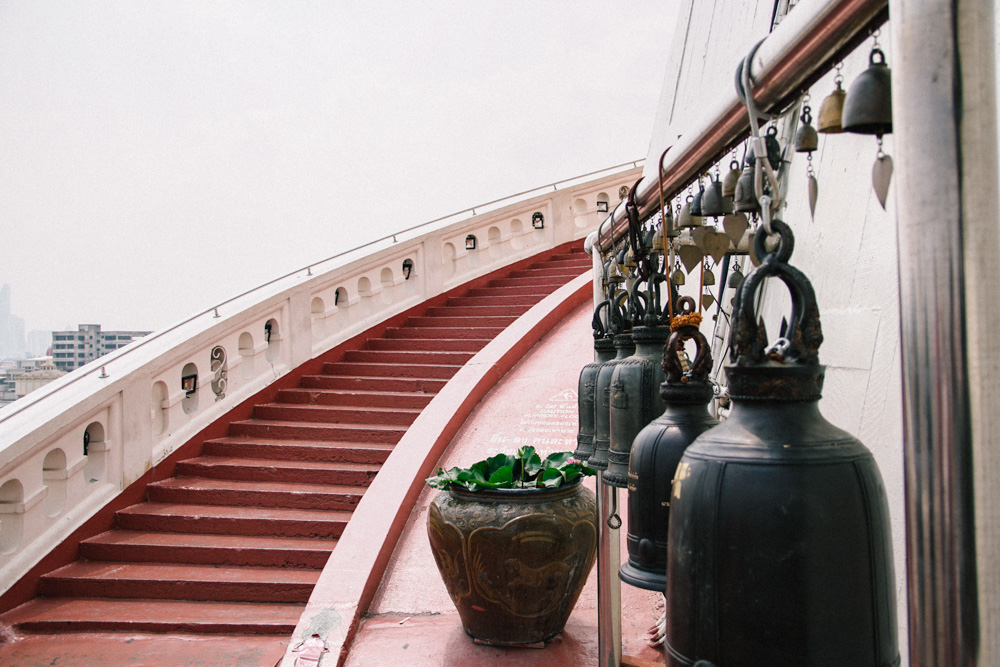 After a few brief stops, we’re climbing into our tuk tuks for the last time. Our final destination is the Golden Mount, with splendid views overlooking the city. But first there are 318 steps to tackle — which Gof apologises profusely for and to make up for it, she encourages us to ring the prayer bells and gongs along the way for good luck. Collective sighs turn to wonder as we reach the lookout. Up here, the chaos and hustle of Bangkok seems to melt away in the steamy afternoon as this mega city rolls out before our eyes.

It feels like we’re in the very middle of Bangkok, a fact that’s confirmed when Gof points out a coordinate marker on the ground declaring the official centre of Bangkok. It feels like the perfect way to finish our tour for the day; standing in the heart of the city after enjoying a morning riding in its most beloved means of transport.