Blog > Uncovering the real Rio… in just one day 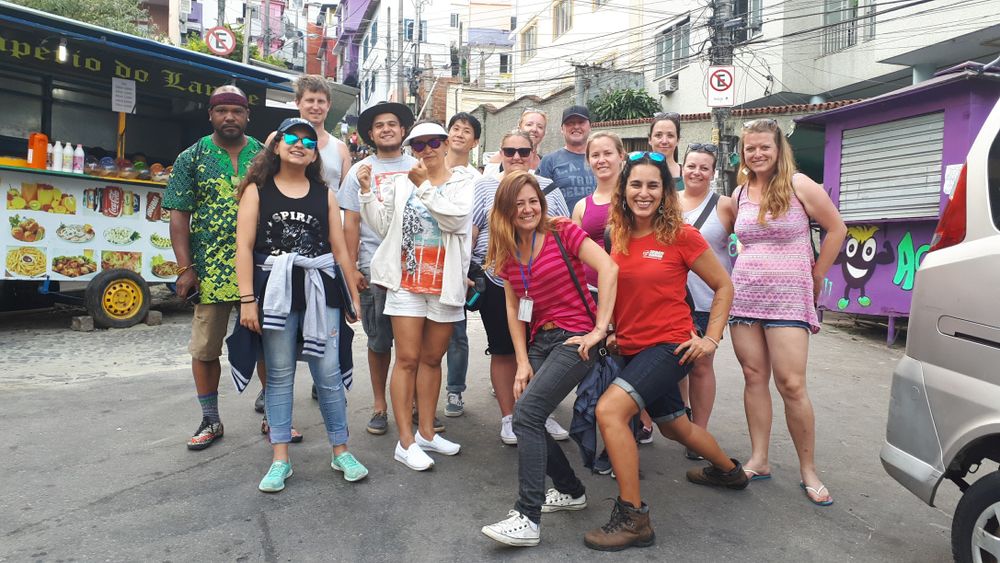 Uncovering the real Rio… in just one day

I went to Rio while on my first ‘360’ around the world. I had spent a few weeks in Ecuador and Peru, and wanted to visit my family in Germany on my way back home to Australia. It would have been silly not to stop anywhere else along the way, so I gave in to my long-lingering temptation to visit Rio de Janeiro. ‘A doctors’ visit,’ so my Airbnb host told me, as I was in and out in just three days. But Rio is worth even the shortest of stays — so long as you plan to come again and spend more time later.

I travelled somewhat the old-fashioned way, as my phone had broken while hiking in Peru. That meant no way to ‘Google-map’ my accommodation, call an Uber or WhatsApp my Airbnb host. Just handwritten instructions to find a cab, and the address scribbled on a piece of paper. There was nothing to worry about, right? After all, I was a blonde, female tourist, arriving in Rio in the middle of the night. What could possibly happen?

You’re right; nothing happened. The cab driver dropped me off at my accommodation, charged me the correct fare, and I had a wonderful night’s sleep. Welcome to Rio de Janeiro.

So, how to spend a two-day-three-night short break in a city that is probably on every traveller’s bucket list, has uncountable books written about it, movies filmed, stories told — and a notorious reputation that had already been debunked? Where to even start?

Don’t know where to start in Rio? Grab a local guide. | Photo by Anne Von Osterhausen

On my first day, I did what every tourist would do: I went to the beach. I went for a run in the early morning hours, mixing with the locals getting ready for another day in paradise. Later on, I walked up and down Copacabana and Ipanema, always with a caipirinha in hand, shopping for beautiful earrings, trying out my Portuguese and snacks along the promenade, and marvelling at the most beautiful people in a most beautiful place.

But then what? I can say that I am an open-minded, well-travelled individual, but it had never really crossed my mind that there were other aspects to Rio than beach, football and Carnival. As I was not travelling during February, and there was no soccer match on, I was stumped.

So I took a tour. I met Julianna the next morning to start my Total Rio Tour. Half of the day was just myself and her, and it felt more like hanging out with a girlfriend than someone hired to show me around. We took the underground to the city centre, passed the famous steps of Selaron, and headed up to the artistic and bohemian suburb of Santa Teresa. It was Monday morning, so most shopfronts were still shut, and the streets were quiet. It was lovely walking the steep streets and learning facts and history, but also chatting about the usual things like boys, food, travel and everything friends would talk about. We stopped at a souvenir shop where everything was made in Brazil, and had good coffee and delicious pao de queijo (cheese puffs).

On our way to the cable car, we heard some gun shots. They were far away, and that was about as much crime as I came across in Rio. Not to say that the stories and rumours and warnings shouldn’t be respected, but I have to say I felt as safe as anywhere throughout my entire stay, even as a female travelling alone.

The second half of the day we spent visiting one of the many favelas. Favela Santa Marta is located just below the Christ the Redeemer statue, and on a clear day, the views are all there to enjoy: the Christ, Copacabana, Ipanema and other beaches, faded away in the mist.

If you want to see the favelas, do it responsibly with a local guide | Photo by Anne Von Osterhausen

Prior to the 2014 World Cup and 2016 Summer Olympics, there was a major clean-up of the favelas. Most of them have their own police stations and guided tours are permitted, provided you’re accompanied by a local resident to the favela and remain respectful that these are still people’s homes, and that life here still isn’t easy.

We met Elias and Salete at the favela entrance, all the way at top of the hill, to walk 788 steps down to the exit. For this half of the tour, our group had grown beyond just the two of us, and we were all given advice on staying respectful and safe. Don’t take photos of people or their homes without permission. Be aware that people may be carrying guns. Note that people will try to sell you things — don’t stress, they’re just entrepreneurs.

It was calm and quiet in the favela, just like any other suburb — admittedly a poor suburb — with a community centre and little shops and bars. Locals smiled at us tourists marvelling at everything we saw. Not only did it feel special to be welcomed there, after all I had heard about life in the favelas, but this particular favela was special. With its beautiful views and painted houses nestled into the steep hill, this favela was chosen as the setting for Michael Jackson’s music video, They Don’t Care About Us. A woman in a souvenir shop about halfway down the hill showed it to us in full length, including the part when she appeared. Today, the favela boasts a life-sized statue of the King of Pop.

(Note that due to current government warnings from Australia, the UK and the USA, our favela tours are currently on hold. Our Total Rio Tour is still available, but the route and itinerary have been adjusted to accommodate these warnings and ensure traveller safety.)

Our last stop of the day was the Christ the Redeemer. The sky was overcast with high winds at the site, but also a fantastic 360-degree views. Standing up there and looking down, I felt I had covered a lot of this overwhelmingly massive city in just two days. Already, I could easily point out major landmarks in every direction, could name the beaches and suburbs, and spot the places I would go later that night to experience some of the world-renowned parties Rio has to offer.

The people who I met during the tour — in the shop where we browsed or the café where we stopped for a snack, and those who showed us life in the favela — only spent a short time with me, but thanks to Julianna, who seemed to know them like friends, they offered us intimate insights into their lives. Who could have known that it would only take one awesome guide and less than 12 hours to make me feel like a local in this magical city?

Rio, I will definitely come again. You have my promise that this was only the beginning.

Want to experience our tours as your own private adventure? Our Create Your Own tours are the perfect solution for planning your own personalised Best. Day. Ever.! (And before you go, don’t forget to grab some travel insurance, courtesy of our friends at World Nomads.)

What lockdown has been like in Havana
The Best Way to Eat and Drink in Tbilisi – is With a Local
Lonely Planet Best in Travel 2020: What not to miss according to locals
The 10 Most Romantic Tours in North America
Best Street Food in Havana: Coco Glasé in Plaza Vieja