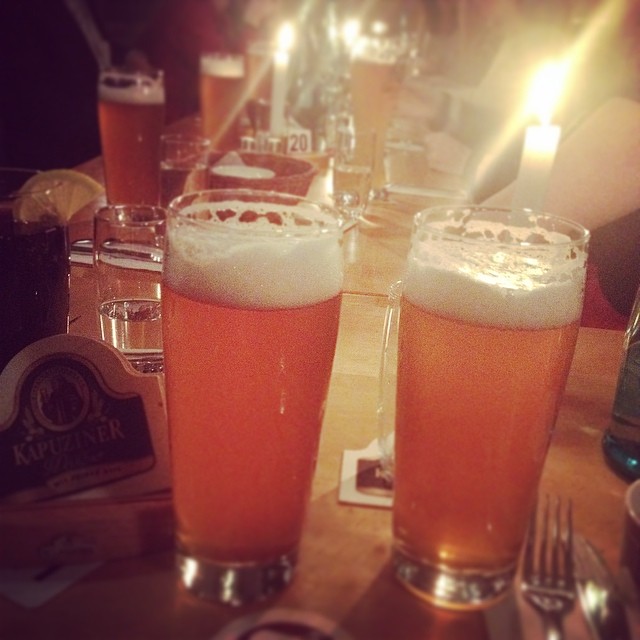 It’s time for the third battle! We’ve pitted the food and street art against each other, and Kreuzberg is streaking away from its cool New York brother with wins in both categories. Say what?!

Now, here’ s the deal. The third category is beer, so you’d have to say it isn’t looking too rosy for Williamsburg right now. Germans are the kings of beer and the Americans, well their reputation is little further back in the pack…

For the sake of research I was happy to hunt down a few different drinking options in both of these neighbourhoods for comparison. Gotta do what you gotta do.

On a very cold Saturday afternoon after munching down a burger from Burgermeister (which is surely the greatest ever upcycling of a public lavatory on the planet), I was looking for somewhere close by and that had football on the television. After all, nothing enhances lager drinking like football. From the quickly fogging windows of the former urinal, I saw a few scarf wearing lads head into Oberbaum Eck near U Schlesisches Tor train station. The beer was cheap and the atmosphere warming. I ordered what the others were drinking – a lager at 2.50 Euro a pint. For some reason we were all going for a Hamburg Football team – St. Pauli. At half time they turned down the commentary and blasted some punk music. Pretty much the ultimate Kreuzberg experience. The beer however – just okay. After drinking a take-away whilst wandering down Oranienstrasse I eventually caught up with some of the Urban Adventures crew at Max and Moritz, which is brew house concocting their own finest ales. I stuck to mainly the house beer here (of course). It had a nice hoppy flavour and not at all sweet nor too strong, making it perfect for a decent session. We broke that up with some traditional beef and dumplings and the odd impromptu circling band. Under promise and over deliver is certainly part of the Urban Adventures style. We really like to keep a few of the unique local surprises up our sleeve for people to experience rather the read about, and it seems Williamsburg in particular (and NYC in general), also like to play that game when it comes to beer. Actually, the level of interest and knowledge in all types of beer at the bars I visited in Williamsburg was a little intimidating. It certainly opened my eyes and taste buds to how little I actually know. Herein I think lies the beauty of tours over just free-styling your travel. Heading to places like Mug’s Ale House and the very surprising Rosamunde Sausage Grill (whom I would definitely have just steamed past if alone), with a knowledgeable companion to guide me through the intricacies of IPA through the ages and the Belgian influence on dark brewing in Brooklyn was in complete contrast to waving a mug of lager in the air, pretending to know the songs of Hamburg’s (second?) finest football team.

The beer, without exception, was extremely flavourful. The passion for quality brews was infectious. That late afternoon introspection about my own lack of knowledge about a subject I thought I knew something about was illuminating. The 180 degree difference what I thought people from the States knew about beer really rocked my world view. An afternoon on the beers in Williamsburg was a damn fine way to spend a spring afternoon.

I have to say I’m more than a little stunned by the outcome and yet also a little happy. That could of course just be the beer talking.

The verdict after the third round:
Kreuzberg 2 – Williamsburg 1!

Next (and final) challenge of the battle of NYC v Berlin – People Watching!