Blog > Unlike any you know: Life beside the rails in Yangon 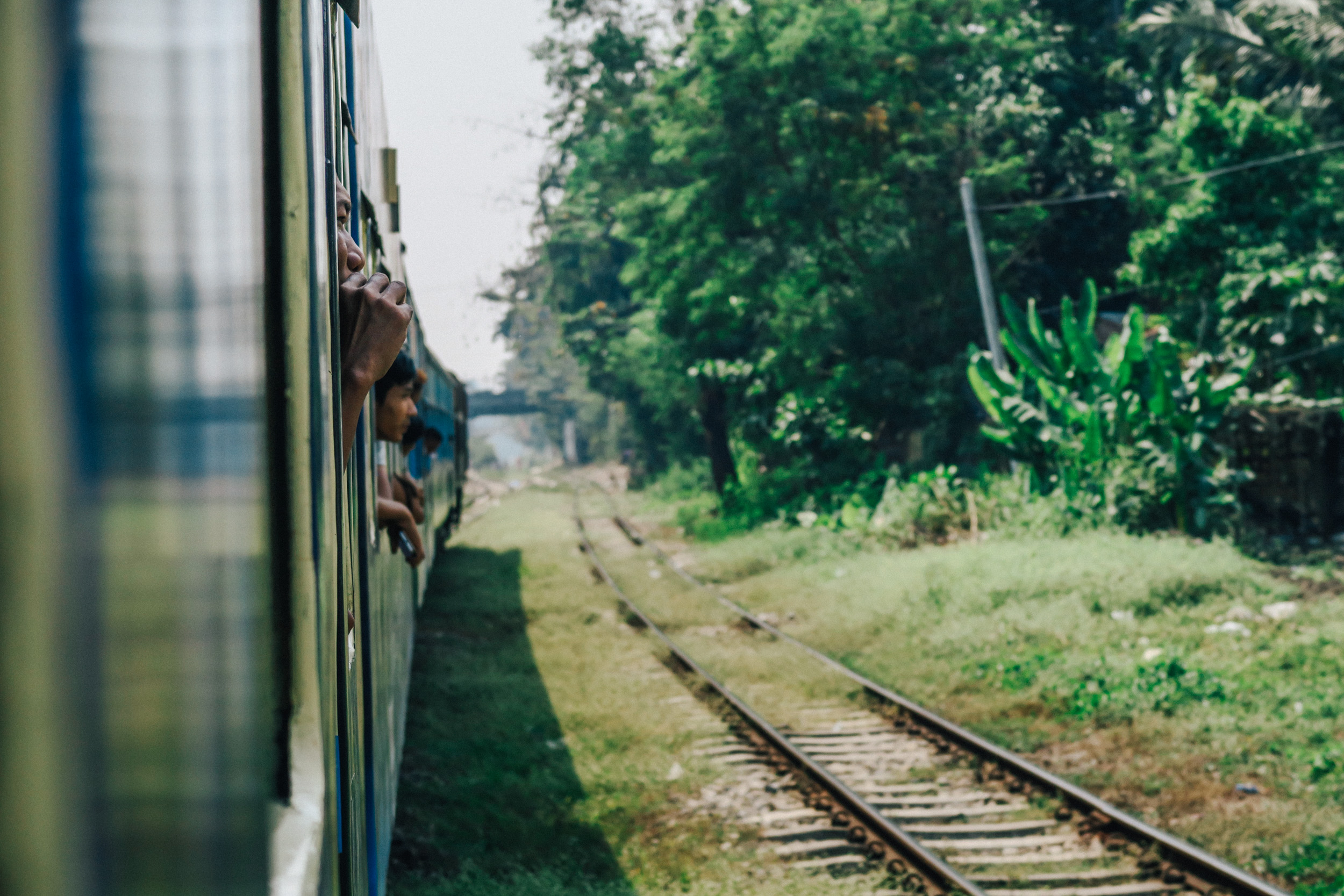 Unlike any you know: Life beside the rails in Yangon

Words and photos by The Common Wanderer

‘This is Myanmar [Burma],’ wrote Rudyard Kipling, “and it’s unlike any land you know”.

Like any clichéd travel quote, the one above has been thrown about pretty often by writers and journalists, in travel circles, and travellers who struggle to find the words to describe this fascinating land themselves. The thing is though — as with all good travel quotes — under all the overuse and cliché, there’s actually some truth to it.

When we travelled recently through Myanmar, we were struck by its uniqueness, the warmth of the locals, and the way the country retained so much authenticity. But arriving into Yangon, we weren’t sure how long we’d stay. Big city travel isn’t generally our thing, and we didn’t want to sour our experiences with the kind of modern chaos and tourist traps that big cities tend to bring.

Plus, perhaps kind of ignorantly, we weren’t really even sure what there was to do once you ticked off the glimmering gold of the Shwedagon Pagoda or Golden rock. So when the opportunity came up to spend a day riding the colonial-era city loop train and experiencing a slice of local on an Urban Adventures tour, we jumped at it. Some of the approximately 150,000 people who use the circle line daily

Our beaming guide Thura greets us out front of the pick-up point, arms wide open and excitedly calling out, “hello new friends!” He’s a bubbly 20-something mechanical engineering student with a passion for his city, and speaking and teaching English. He shakes our hands and introduces us to the rest of our group — his other new friends — before we take off. It’s like the coming together of two old friendship groups in a new city, and it sets the tone perfectly for the rest of the day.

Right in front of the Central Railway Station we hit a snag in the form of what seems an impossibly busy six-lane main road. Thura grins. Stick with him, he says, he‘s done this Yangon traffic thing before. He waits for a break to appear before stepping out with a hand up and a respectful nod to the drivers, slowing them long enough for us to run across and down the stairs to the station platform. Cross a Yangon road like a local? We got this.

It’s quiet at the station; surprising given between 100-150,000 people will be ferried around the loop today. Not far from where we wait, a teenage boy listens to pop music on his iPhone’s speaker while a businessman thumbs through Democracy Today — a sign that the times, they really are a-changing here. 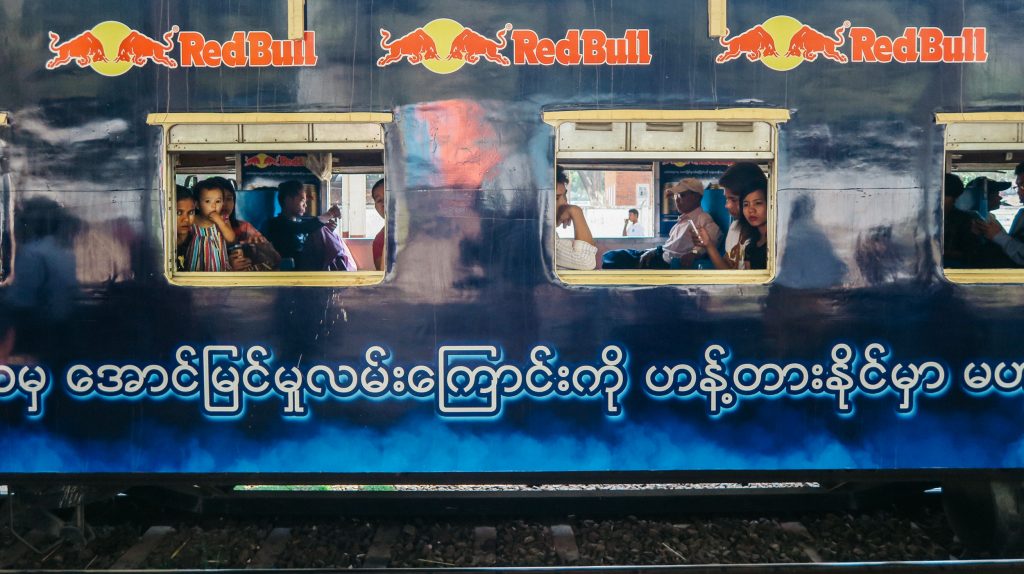 Faces of the circle line

The quiet is shattered when a train screeches into the platform, a swarm of people moving past us and throwing curious glances our way. Thura shepherds us on board; we only have a few minutes before the old engine springs into action, hauling the bouncing rickety carriages over the 45.9 kilometres of track linking 39 urban, suburban, and rural stations in one big loop.

Carriage rocking from side to side, we wind past the city’s neighbourhoods, through suburbia and shantytowns and into the rural villages where water buffalo still pull carts and plough fields. Monks wander along the tracks, grubby children play in the fields, and rolling green watercress and rice paddies abound. Inside the carriage, the locals watch us with bemused expressions, probably wondering what we make of it all. They break into huge grins when we smile at them. Watercress fields next to the train station outside Yangon

Life in Myanmar is still difficult for many and poverty is rife. Far cheaper than bus fares, the train is the transport of choice for many locals taking their wares to market. Every now and then, the train slows just enough to allow passengers to scramble on and off. Vendors swing wicker baskets full of fresh produce on board and mount the stairs with dexterity, balancing trays precariously upon their heads. Soon, each carriage is transformed into a noisy moving marketplace; papaya salads, fresh fruit, the day’s paper, cigarettes, and Betel quids at our fingertips.

At Da Nyin Gone station the wholesale market spills onto the platform in a flurry of activity; traders hustle at train doorways; vendors dash to stalls with arms full of produce; Thanaka-painted children dart between legs; and beggars wave metal cups and wait for the jangle of incoming Kyat. Everyone listens for the signal of an oncoming train, collecting their goods and joining the stampede to safety when the announcement comes.

Following Thura into the market’s narrow, dark laneways it’s not long before the smell of fermenting shrimp paste assaults our noses. He laughs at our screwed up faces and explains that it’s used in the majority of dishes in Myanmar so most people here love it. We’ll take his word for it. Chilies on sale at the markets

The stall owners here are incredibly friendly, flashing smiles and calling mingalaba (hello) as we pass. We stop occasionally to buy an ear of corn, bags of sweet watermelon, or fresh pineapple. Our limited Burmese fails us, but it turns out that thumbs ups are universal and we manage to communicate how tasty everything is with a series of gestures and big grins which are returned to us ten-fold.

Heading back towards the city (and our next stops on the tour!), we gaze out the window in contemplation at the totally unique cross-section of life laid out before us. A trip on the city circle is much like taking a journey straight back into Myanmar’s past, and yet we realised that while the train lazily crawls around the track each day, the rate of development in Yangon is skyrocketing.  There are signs of rapid change everywhere — a three-level KFC rising next to a Hindu temple, iPhones in every hand. As the sprawling city comes back into view, we can’t help but wonder whether the vibrant, simple existence that floats alongside the tracks will last in its current state — or will it give way to highrises, overpasses, and highspeed MRTs?  How long this life beside the rails will remain unlike any you know is anyone’s guess really, but we’re glad we took the time to explore it while it does, just like a local. A sign of the changing times for the people of Myanmar

The Common Wanderer travelled on our Let Yangon Take You For a Ride day tour. It’s about a six to seven-hour-long tour, and starts at USD 40.