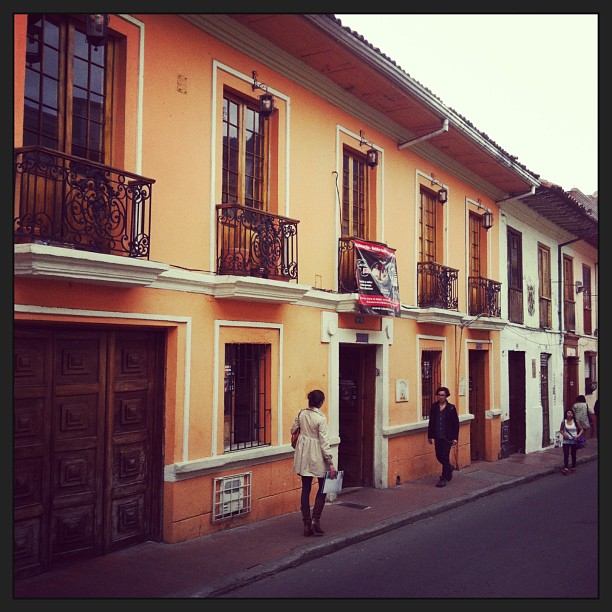 Obviously, 24 hours in Bogotá is not enough time, but it is possible to see much of the city during a short stay. Here’s a sampler of the best things to do in Bogotá — perfect for getting a taste until you can come back again and explore the city in more depth!

Start your day in Bogotá early and head to Paloquemao Market. Stroll through the produce section and grab a freshly squeezed juice and fruit salad for breakfast. Observe Bogotános buying groceries and feel the special atmosphere this place has to offer. Every seller is an expert in his or her small stand’s wares, and they will happily give you all the details about their products. The market may seem chaotic at first but the minute you completely dive into the vibes, you will feel the happiness this place spreads.

Your next stop should be La Candelaria — the historical centre of Bogotá. (But be warned: it’s also believed to be a haunted destination!) A good starting point is the Plaza Bolivar, a big square perfect for people-watching. Chat with locals selling various items from their bike-shops, such as sweets, arepas, pastries, drinks, and ice cream, or offering horse and llama rides for kids. If you stand in the middle of the square and look north, you’ll see the Palace of Justice, where the Supreme Court of Colombia is working. On the eastern side is where the Primary Cathedral of Bogotá is located. To the west, you’ll see a French-style building known as the Palacio Liévano, which is the seat of Bogotá’s mayor. Last but not least is the Capitolio Nacional along the southern side, which is the seat of the Colombian Congress.

While you’re in La Candelaria, take time to visit the Museo de Botero, which exhibits many paintings and sculptures by Colombian artist Fernando Botero, as well as the work of various other artists. Also worth discovering is the Museo del Oro, which features the world’s biggest collection of pre-Hispanic gold work, and numerous ancient stone, shell, wood, and pottery objects. The Museo del Oro is also a great location for lunch as it hosts a café/restaurant where you can taste Colombian cuisine.

After lunch, head up Monserrate Hill and take in an amazing view of Bogotá. You can get up via train, funicular, or a walking path that takes about one hour (and can be quite exhausting due to the altitude). Once atop the hill, you’ll be stunned by the size of Bogotá — and bear in mind that you cannot even see the whole city from this lookout point! Many parts of the east and the north are hidden, so you can only imagine how huge this city really is. But it’s not just the view that makes a trip up Monserrate Hill worth your time. There’s also a monastery at the top, and a black Madonna like the famed Virgin of Monserrate in Barcelona. You can also stroll through the park and follow the way of the cross of Jesus, which is displayed in several sculptures. Head back to the centre of Bogotá, and walk north on Carrera 7. The start of this street is reserved for pedestrians and offers many shops worth exploring. Once you get tired of walking, take a taxi to Zona T in Calle 85, where two pedestrian streets cross each other in a “T” formation (hence the name). Zona T is one of Bogotá’s primary areas for restaurants, bars, and clubs. You’ll find many different restaurants featuring international cuisine as well as Colombian fare. All the restaurants in this area are worth recommending, so choose based on whatever culinary mood you’re feeling.

After dinner, you only have to walk one block in order to find a great bar. If you are a beer fan, we recommend enjoying a pint at Bogotá Beer Company. Not only do they brew their own beers, but the atmosphere is great. Depending on how tired you are after this whole day exploring Bogotá, you can either call it a night or keep on going at one of the many nightclubs Zona T has to offer.