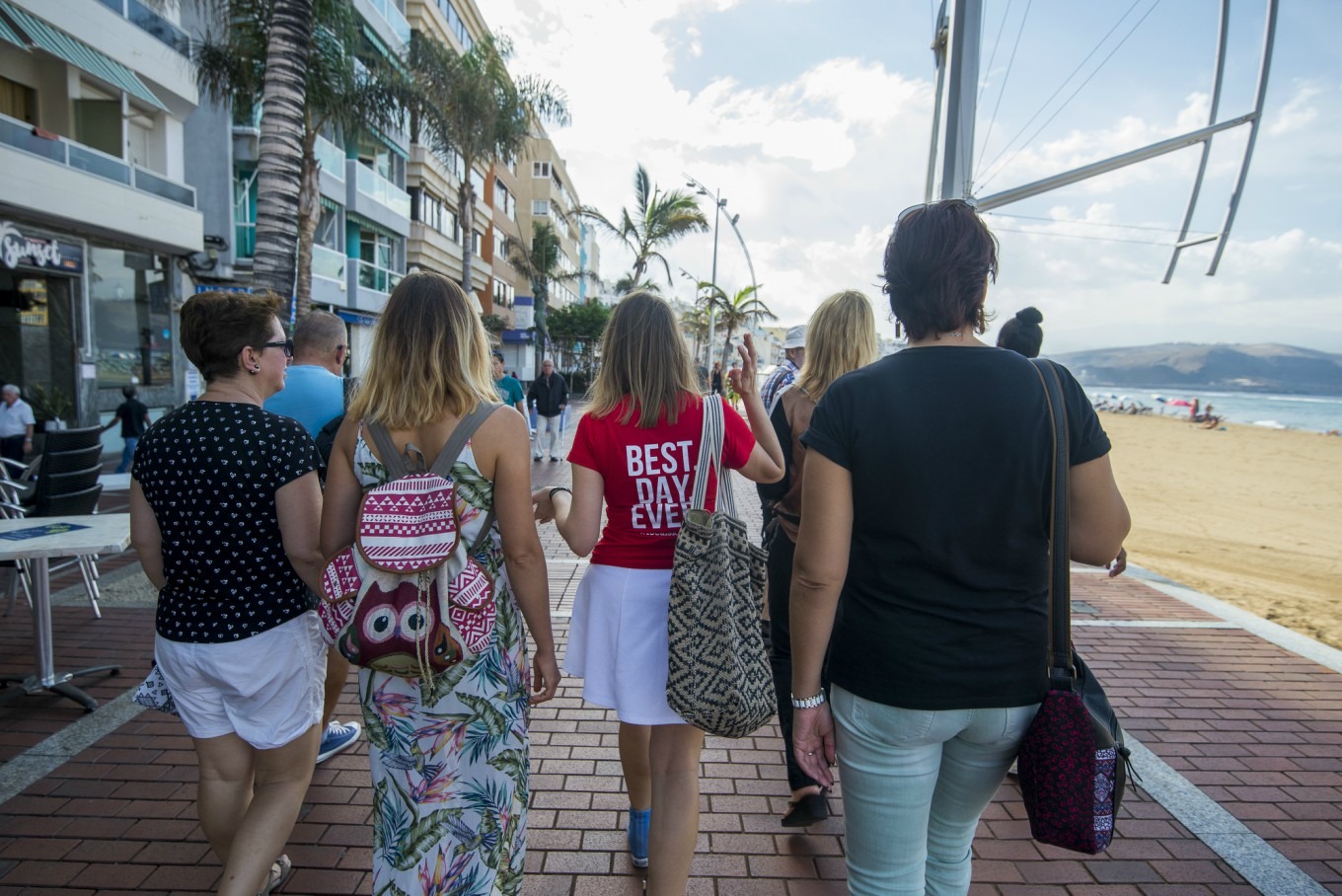 Whether you’re visiting for the 60+ kilometres of beaches, the fresh seafood, the hiking and mountain biking, the watersports, or the history and culture, Gran Canaria won’t disappoint. But if you only have time for a short visit, you can still get a good sense of the island — especially if you follow these insider tips. Here are our picks for how to spend the ultimate 24 hours in Gran Canaria.

Start your day with a visit to the capital of Las Palmas, where you’ll find the amazing urban beach, Las Canteras. Grab some traditional Spanish churros or a croissant with coffee by the beach. Our top recommendation for a morning meal is La Churreria, known for their churros and a favourite among locals. They don’t open until 8am so start your morning with a walk along the beach and then enjoy some breakfast by the ocean.

Take a 10-minute taxi ride from Las Canteras to Vegueta, the historical part of Las Palmas, where you can explore the narrow, cobbled streets. While you’re there, make a stop at Casa de Colón (Columbus House), which documents Columbus’ voyages, as well as contains exhibitions on the historical evolution of Las Palmas de Gran Canaria. The building itself is a good example of Canarian architecture and it is believed that Columbus himself may have stayed here on one of his voyages. Following the museum, visit the impressive Santa Ana Cathedral where you can take a lift to the top of the bell tower for postcard-perfect views over Las Palmas, and (if you’re lucky with the weather), even other islands of the archipelago.

Spend the early part of the afternoon in San Cristobal, a tiny fishing village just a few minutes by taxi from Las Palmas. Alternatively, from Casa de Colón it’s a 30- to 40-minute walk. Cross to the seaside and keep walking south until you get to the first village. San Cristobal is famous for traditional Canarian food and some of the freshest seafood in the region — so bring your appetite! Mostly local families head here for lunch, so get ready to be one of the very few tourists when you tuck into your midday meal.

Afternoons are great for exploring the southern part of the Island, and even if you’re not a big fan of the beach, we’re willing to bet you’ll love the sprawling sand dunes of Maspalomas and historic lighthouse of the same name. To get here, make your way to San Telmo bus station by taxi and then take bus number 30 from there. It will take you about 40 minutes to one hour to get to El Faro de Maspalomas, from which you can start exploring the dunes. The dunes are part of the Maspalomas Natural Dune Reserve. If you do feel like spending some time relaxing on the sand before or after exploring the dunes, the beach here is a great place for swimming and soaking up the sunshine.

While you’re in the Maspalomas area, you can easily find a spot to have dinner. There are plenty of restaurants in this part of Gran Canaria, but we suggest a seriously unique venue in Maspalomas. Moonlight Cinema is the only permanent outdoor cinema in Europe and if you’re wondering why we’re suggesting a movie when you’re probably going to be ready for dinner at this point, that’s because you can actually enjoy thin crust pizzas, cocktails, snacks and hot beverages served directly to your seat (which happens to be a comfy couch) as you’re watching the flick.

The best way to get from the airport to the sites is by taking a taxi in order to maximise your time on a shorter stay. Taxi stops can be found outside both the national/international and local terminals, and the cost of a ride to Las Palmas should be about EUR 40. Alternatively, if you want to save some money, you can take bus number 60 from the airport directly to the bus station at San Telmo right in the city centre of Las Palmas for EUR 2.30 and then take a taxi back to the airport when it’s time to depart.

If you want to see Gran Canaria in two hours in the morning or afternoon, make your way to Las Canteras, one of the top urban beaches in Europe. The beach here stretches for two kilometres and is known for its year-round calm waters. Grab a spot on the sand, or just walk along the beach or the waterfront promenade and stop for a drink or something to eat at one of the area cafés and restaurants.

If you’re in Gran Canaria for an evening or nighttime layover, head straight for Vegueta, the historical part of Las Palmas. Spend your layover exploring the narrow streets filled with museums, shops and historical buildings.