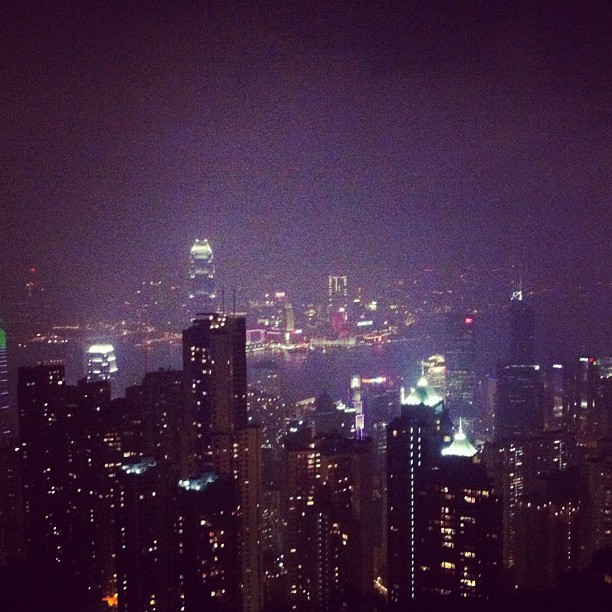 Travelling through Asia and have just one day to explore Hong Kong? Never fear, our locals are here to help you out! Here’s what they would do with just 24 hours in Hong Kong.

To kick off your day, get down to some Hong Kong exercise! Grab a cab to the gorgeous Hong Kong Zoological and Botanical Garden, and on the mid-level you can join the many elderly locals who wake up early every day, hike the mountain trails of the city, and do tai chi at the city’s parks before heading to yum cha, or morning tea.

For super authentic yum cha experience to have for your HK breakfast, head to Lin Heung Lau on Wellington Street. Ten or more people have to share one of its many big round tables, each going for their tea, dim sum, and morning newspaper. Regardless of the proximity to everyone else, the atmosphere is always calm. Lin Heung Lau is the oldest existing Chinese tea house in Hong Kong and doing yum cha here is to experience what is no longer available in the rest of the city. Dim sum connoisseurs may also want to check out Luk Yue on Stanley Street. Dim sums are not cheap here, but they are really tasty, and the décor provides a real colonial era Hong Kong ambience. Head to Asia Society in Admiralty, a new architectural structure built along the mountain, incorporating explosive storage houses that are over 100 years old. The forest-like surroundings, invigorating architecture, exciting exhibitions, and beautiful glass box-shaped restaurant, AMMO, is a pleasure to visit.

Five minutes away from the Asia Society is the beautiful Hong Kong Park, home to the oldest Western architecture in Hong Kong. Since the early 80s, the Tea Ware Museum here has been showcasing tea cups and tea ports, and teaching guests about Chinese tea culture. However, from 1846 to the late 1970s, this building was the residence and office of the Commander in Chief of the British Military in Hong Kong. It is today an interesting juxtaposition between Western style architecture and Chinese drink culture. Next to the Tea Ware Museum is the Lok Cha Teahouse, where you can actually experience first-hand the Chinese tea culture with locals demonstrating tea ceremonies.

The Aviary inside Hong Kong Park is also worth a visit. Spacious, full of exotic birds from all over the world, and it features a breath-taking skyscraper backdrop.

Take the century-old Star Ferry from Central Waterfront on Hong Kong Island to the Kowloon Peninsula, landing at Tsim Sha Tsui, a spot with countless international hotels and the most museums in the city. First, head to the Hong Kong Museum of Art. Currently undergoing an expansion project, the Art Museum showcases a strong selection of Hong Kong and Chinese artworks. Afterwards, head to the Eastern part of Tsim Sha Tsui for the History Museum, which features a permanent exhibition called Story of Hong Kong. If you were to take your time and really goes through the whole exhibition (which is enormous and realistically would usually take a whole day!), you would become an expert on Hong Kong. However, if you don’t have the time or energy, consider going to the museum’s one-off exhibitions instead.

For around 5pm, head to The Peninsula, a hotel known for its legendary High Tea. Once known as the grandest hotel east of the Suez Canal, The Peninsula is nearly a century old and retains its shining status as one of the fanciest spots in town. In Hong Kong, you can’t beat the ornamental and luxurious lobby of ‘The Pen’ for an experience of ambience and times gone by. If the line for the High Tea (reservations are only available for hotel guests) is impossible, head next door to Hullett House instead, which was the former headquarters of the Hong Kong Marine Police and now a 5-star hotel with beautiful dining rooms.

After High Tea, stroll to the nearby Kowloon Park, which was built on the site of a former military barracks, and part of which has been turned in to the Heritage Discovery Centre. This serves as a kind of archaeological museum for the city, showcasing leftover pieces of human civilization from thousands of years ago. If that doesn’t interest you, skip the museum and enjoy the park during sunset instead, complete with lots of lush greenery and flamingos.

A 5-10 minutes taxi ride from the park brings you to the entrance of the Temple Street Night Market on Kansu Street. Yes, it is a touristy market and yes, the stalls here try to rip off tourists from time to time, but it is still worth a visit. Arts and craft from all over Asia, low tech but ingenious gadgets, CDs and cassette tapes from the last few decades, and much, much more are abundant in this market. Besides, there are also plenty of Dai Pai Dongs – street dining restaurants with fold up tables and chairs serving working class dishes, such as fried crab or sweet and sour pork. After you’ve enjoyed an authentic dinner, take a stroll 5 minutes away from the Temple Street Market to King’s Park public garden, which is tucked away on a small hill in the Yau Ma Tei neighbourhood. Walking up you are suddenly surrounded by trees and the sound of birds and insects. On the top of the hill is a circular running track which gives you a great view of Kowloon, including the gritty old Mong Kok and the glamorous modern Kowloon Station development, where the Ritz Carlton and W Hotels are located. It’s possibly the best kept secret in urban Hong Kong (so shhhh!), and here you will rub shoulders with local residents who come here for their nightly strolls.

Another 5-10 minute taxi ride will bring you to the Ritz Carlton hotel, which takes up the top 15 floors of the International Commerce Centre, the highest building in Hong Kong and one of the tallest in the world. The Hong Kong Ritz Carlton is also the highest hotel in the world and its bar, the Ozone Bar, is the highest bar in the world. Sip a cool drink at Ozone (the prices are a spine-chilling but it adds to the experience we guess…) and tell people you have been at the top of the world!

Next, take the MTR from Kowloon Station to Hong Kong station and head to Lan Kwai Fong, the granddaddy of Hong Kong nightlife. At Lan Kwai Fong and its vicinity, spot by Dragon-I, the place to see and be seen in Hong Kong and where the city’s financial professionals and fashion models meet and mingle. To be granted entry, dress smart and show confidence. Alternatively, if you are into proper dance music instead of the social scene, head to Oma, a no frills club tucked in an alleyway off Pottinger Street with good music and plenty of people.

If you’re still going strong around 2am, another 5-10 minutes taxi ride will bring you to Dusk till Dawn in Wan Chai, which provides energetic Filipino bands, more reasonably priced drinks, and young men and women from all over the world hanging out and dancing. As you can see, there’s plenty to see in HK. If you want a fresh perspective of this fascinating city, check out our local Hong Kong tours.