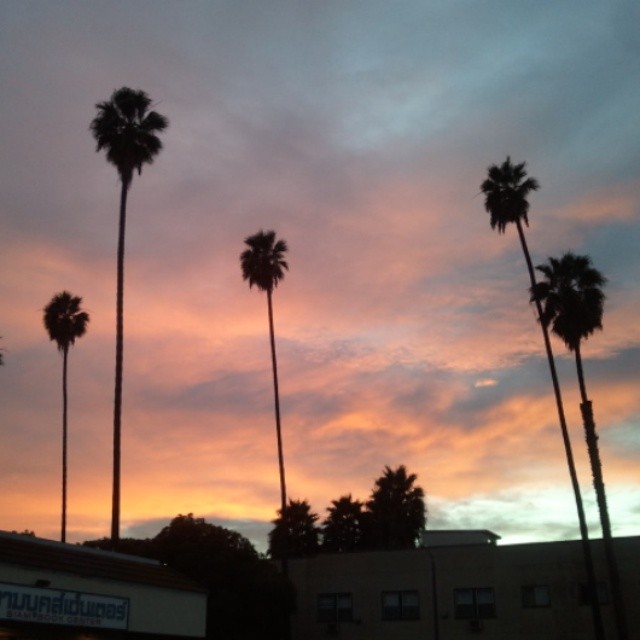 Los Angeles can be daunting to take on all in one day, even with a car, but here’s how you can make your visit count on just a little cash and a whole lotta adventure.

If you arrive early morning, take the FlyAway Shuttle from LAX airport to Union Station (it’s just $7 and should be faster than the alternative Metro Green Line to Metro Blue Line to Metro Red Line, although it you’re really pinching pennies you can get a Metro Day Pass for $6 and go all day right from the airport). Hop off, walk through the 1939 historic “last great railway station of America” (stop to sit in the original wooden waiting area seats) and cross the street to Olvera Street. Grab a hot churro at Mr. Churro (entrance off Alameda or Olvera) and admire the color of El Pueblo de Los Angeles. Take note of historic buildings such as the city’s first firehouse, hotel (Pico House) and church before crossing the 101 Freeway to the City Hall.

Check into the City Hall and take the elevator up to the top floor for a view of Los Angeles from the observation deck. You can also admire portraits of all the mayors who ever served, if you fancy! Hop on the Metro Red Line at the Civic Center station (just up from City Hall) and ride it to the Hollywood/Highland stop. (Buy a TAP card and Metro Day Pass–just $6!)

Take the escalators next to the main staircase at the Hollywood & Highland Center up three flights to the observation bridge of Hollywood and Highland to get a view of the Hollywood Sign. Stroll past the Dolby Theatre, home of the Oscar Awards and the Chinese Theatre, famed site of red carpet movie premieres and celebrity handprints and footprints. Continue along the Walk of Fame to it’s start point at Hollywood and La Brea, where four silver lady statues shimmer in the sun.

Jump on the 217 bus at the corner of Hollywood and La Brea and ride it 15 minutes to Fairfax and 3rd St. Exit here for the Original Farmers Market in Los Angeles–a trove of treats and treasures to feast your eyes and pocketbook upon. Korean BBQ, pizza, gourmet Mexican tacos and homemade donuts are some of the cheap eats available in this traditional market, all available for under $10. Once you’ve sated your palate, head back to the Fairfax and Third St. bus stop to pick up the 217 or 780 south again to Washington. Change here to the Culver City 1 bus and get off at Strongs Dr, just steps from the Venice Pier. (These trips could take over an hour so it’s a great time to nap on tired feet and a full belly!)

Walk to the Venice Pier and rent a bike to ride up the Venice bike path. J’s Rentals has bikes available for under $10. If you have the energy, it’s just over 3 miles to the Santa Monica Pier (be sure to rent a lock if you plan to leave your bike at the pier while you have a look around). On your way back, stop for a local craft beer at the Venice Ale House and soak up the last rays of the setting sun. From the Venice Pier (Pacific Ave), the Culver City 1 bus will take you back down Washington to Lincoln Blvd where you can transfer to the Big Blue Bus #3 headed to LAX. (This trip will also take over an hour so be sure to allow plenty of time.)

If you can’t bear the thought of missing Beverly Hills, the Metro Bus 16 picks up from the NE corner of 3rd and Fairfax and runs through Beverly Hills along Santa Monica Blvd. Get off at Canon or Camden and walk over to Rodeo. It’s easy to pick up another Metro Rapid bus from here straight out to Santa Monica (get on at Wilshire Blvd or Santa Monica Blvd.) Don’t forget that rush hour in Los Angeles begins as early as 3:30pm and traffic can occur any time of the day, so allow plenty of leeway between sites and the airport!

This 24-hours-in-Los-Angeles-on-a-budget itinerary should keep your expenses around $30 (talk about travel on a shoestring!).