Blog > Discovering the best of Los Angeles with a local 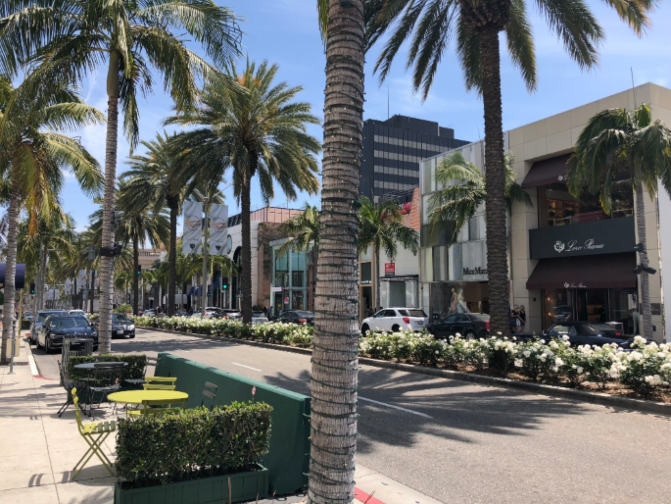 Discovering the best of Los Angeles with a local

Eight hours. That’s how long the tour I’m taking today will last. I’ll be checking out the city’s iconic landmarks as well as venturing to its hidden gems. Best of all though, the tour’s description had promised I’d be escaping the LA cliché. Having visited Los Angeles a few times growing up, I’m curious what that will entail.

With a coffee in hand, I arrive at the meeting point in front of The Hollywood & Highland Complex at 9am on the dot. My guide, a bubbly brunette, introduces herself as Aerianne. Standing with her is a young couple. They’re Dutch and only in LA for a few days, they tell me.

“We’ll be walking and taking the bus around the city before making our way to the beach to finish the day with a bike ride,” Aerianne tells us. And with that, we set off.

First up: Aerianne gives us some background on Hollywood. Studios had picked Los Angeles as the ideal spot to film their movies – silent at the time – because of the year-round warm weather and the fact that its natural landscape could make scenes look like they were anywhere.

At the back of the complex, through the haze, we’re able to make out the Hollywood sign in the distance. Originally, it had read ‘Hollywoodland’, but was shortened to ‘Hollywood’ and later almost torn down. Celebrities including Hugh Hefner had banded together to save it.

Inside the Hollywood & Highland is Dolby Theater, the permanent home of the Academy Awards. I feel like I’m part of history just standing outside it. When it’s not being used to hand out Oscars, shows like American Idol and X Factor tape here.

Leaving the complex, the California sun is shining brightly outside. Aerianne tells us to look down. We’re at the spot where the first stars were laid on the Hollywood Walk of Fame. Nowadays, with two stars added each month, there are enough to go for a mile down Hollywood Boulevard and half a mile down Vine Street.

“The rule is that you have to be present to accept your star,” says Aerianne. “So, if you go online and see who’s set to be getting one, you can show up at their ceremony that day.” It’s a gem of a tip and one of the many that Aerianne provides us with throughout the day.

Checking out the Walk of Fame | Photo by Sangeeta Kocharekar

Along Hollywood Boulevard is the famous Grauman’s Chinese Theater, where the premieres of the Harry Potter and Twilight movies were held. The theatre was designed by Sid Grauman and most of its architectural features were directly imported from China. Grauman wanted the building to be exotic because he believed people went to the movies to be transported far away. Through the crowds of milling tourists, we see the famous cement hand and footprints Grauman’s is known for.  At first, invitations to make one were reserved for Grauman’s mostly-celebrity friends, but when he passed away, they were extended to other celebrities. No one knows how the selected few are chosen.

Next, we stroll to the Roosevelt Hotel, the original home of the Oscars and, in 1927, the tallest building in Hollywood. An event seems to be happening there and we aren’t allowed in. Not that we mind – a secret garden stop is next.

Down a side street off Hollywood, we arrive at a fenced metal gate. “Vlad!” Aerianne yells. An older Russian man who seems to appear out of thin air comes to let us in. We’re at Wattles Farm, Aerianne explains. It’s a charming community garden and, as it turns out, one of Hollywood’s best-kept secrets. Vlad, clearly passionate about plants, shows us lavenders, bananas and artichokes and has us taste Australian finger lime and tiny apples. It’s a good warm-up to lunch, which we have at the Original Farmers Market next to shopping centre The Grove.

Though what we’ve seen and learnt so far has been fascinating, I’m looking forward to the afternoon: Beverly Hills and the beach. Getting off the bus in Beverly Hills, the difference between it and the rest of LA is striking. It’s a place with wider streets, silver fire hydrants (no joke) and (believe it or not) a cupcake ATM.

A vending machine just for cupcakes | Photo by Sangeeta Kocharekar

After a stroll around the lily pond at Beverly Gardens Park, we see it. It’s bright pink and located outside Sprinkles Cupcakes. We don’t try it, but do head inside the famed shop for a red velvet cupcake.

Back outside, we pay a visit to another famous shop: Bijan, the world’s most expensive men’s clothing store. Though we don’t go inside, just standing in front of it is enough to understand how luxurious it really is. The store’s yellow car, complete with a license plate reading BIJAN and a matching yellow parking meter, commands your attention. “It’s a regular meter so someone from the store has to come outside and pay it every four hours,” says Aerianne.

She also tells us the history of Beverly Hills. It all started with hairdresser Vidal Sassoon who set up his salon in Beverly Hills. Celebrities flocked to the neighbourhood to visit him. But it was the ’90s movie Pretty Woman that cemented the area’s reputation.

Along Rodeo Walk of Style, a pedestrian-only pathway lined with shops oozing opulence, Aerianne takes us into Galerie Michael, another hidden gem. Inside are original works by Pablo Picasso, Marc Chagall, Joan Miro and Alexandre Renoir.

By now it’s late afternoon and, I’m pleased to learn, beach time. We take the bus over to Santa Monica. Beginning at fast fashion shopping street Third Street Promenade, we make our way through the beach town to a spot overlooking the Santa Monica Pier. Aerianne tells us it was washed away and rebuilt again and again. Seems like a lot of effort, but when we head down and I see it firsthand, I can see why it’s worth it.

We rent bikes and ride them along a busy path winding along the coastline down to Venice. Though the ride here from Santa Monica takes less than 15 minutes, the vibe here couldn’t be any more different. There are no H&Ms or carnival rides. Instead, there’s Muscle Beach, an outdoor gym where none other than Arnold Schwarzenegger was discovered, and a skate park, where we stand and watch for a while.

And then it’s over. We bike back to Santa Monica and Aerianne leaves us there. The day had been well-spent. I’d seen a few of the same sights I had before, but a surprisingly number that I hadn’t – places that I’d definitely visit again. Now however, it’s time for a nap.

A local’s guide to Williamsburg, Brooklyn, NYC
What lockdown has been like in Philadelphia
Philadelphia Wellness Guide: Healthy Eating, Exercise Options and More
The Best Way to Eat and Drink in Tbilisi – is With a Local
Ultimate Guide to Being Vegan in Philadelphia