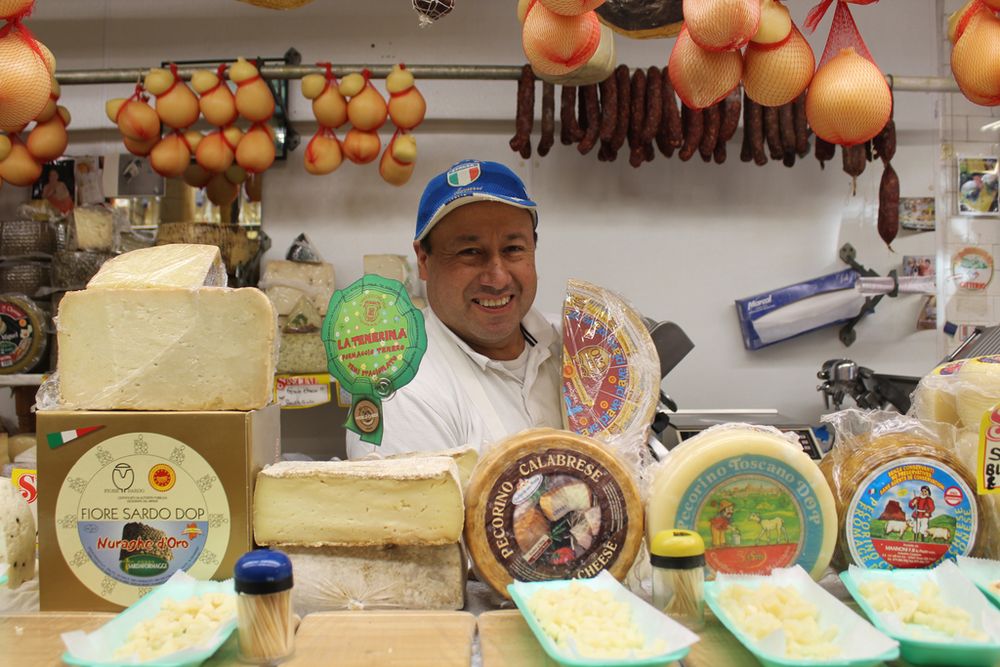 What’s the most iconic building in New York City? Is it the Empire State, its spire pointing towards the heavens? Or perhaps Rockefeller Center with its proud traditions and breathtaking panoramic views. Or maybe the Chrysler, its pretty rooftop design making it inherently recognisable from all around the city.

I’d wager it’s none of the above.

Instead, I’d consider those narrow brick apartment buildings with outdoor fire escapes that immediately give a sense of place in the Big Apple. These tenements, as they were called before the word ‘apartment’ became the fashionable description, hold a pretty incredible history of immigration, of food and of how New York became the original melting pot of cultures. 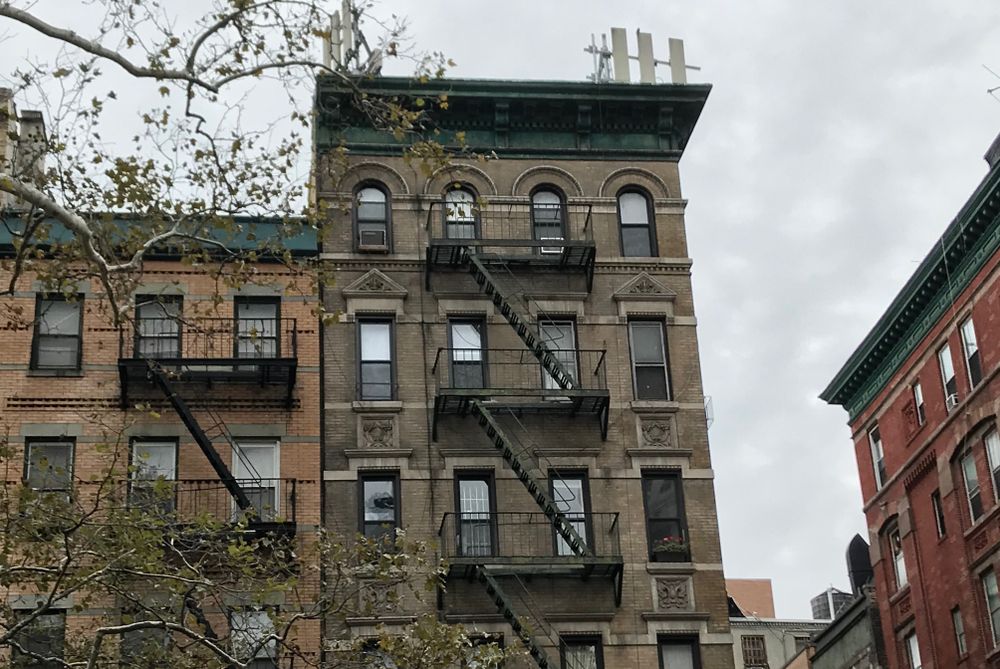 Today, I head out on a food-fuelled history tour with Urban Adventures, to discover some of that heritage as well as to eat my way around some of the oldest and most historic areas of the city. A walking tour with a story to tell, this half-day trip explores each immigrant group that arrived in New York and made the city home, by leading travellers through the different ethnic neighbourhoods and eating their local dishes.

We begin with a stroopwaffel, a Dutch delight, which is sort of a cross between a biscuit and a waffle. It’s flat like a pancake, but with the crunch and taste of a waffle. It’s sweet – the syrupy taste is definitely noticeable, and it joins perfectly with a walk past one of the impressive buildings in the municipal area that still bears the title ‘New Amsterdam,’ carved for the original Dutch explorers who came here.

Of course, no food tour in New York would be complete without a visit to Chinatown. I’m a dumpling fiend, so listening to the stories of Chinese settlers who arrived for the gold rush and then turned their hands to the railroads, with an entire plate of potsticker dumplings in my hand, is pretty awesome. I make note of this little dumpling store so I can retrace my steps for later and grab another plate. They’re THAT good. Finding this store is exactly the reason why I love doing tours like this — the shop is hidden behind plastic curtains and I never would have been able to find it by myself. 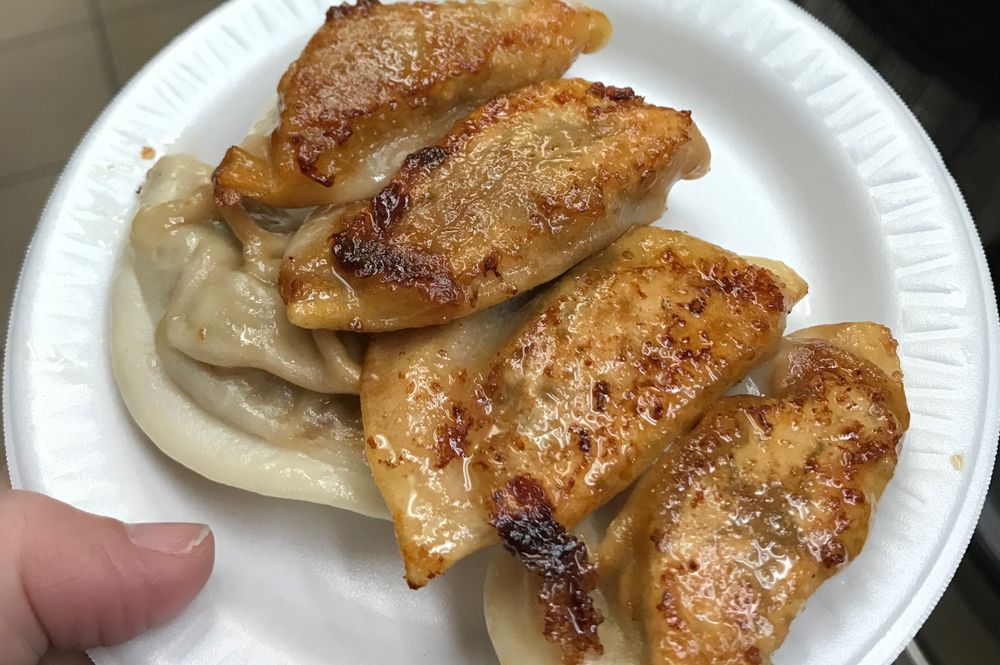 Chinatown is conveniently right next to Little Italy, although it’s evident that Chinatown is starting to expand over the borders and take up some space in Italian territory. Chinese fruit and vegetable stands abound, even boasting exotic fruits like rambutan, which I’ve typically only seen in destinations like Vietnam.

But in Little Italy, we are here for one thing: cheese. We visit a store co-owned by Tony Danza, where an entire plate of freshly made mozzarella is waiting for us, along with some of the shop’s famous prosciutto to accompany it. The technique is simple: wrap the mozzarella in the prosciutto and take a big bite. The milkiness of the fresh cheese perfectly compliments the saltiness of the cured meat, and just like that, this tour has located my horcrux. I could easily eat a wheel of this stuff.

Wandering out of Little Italy, in and around the Nolita area, there are signs of the rich history of the tenement era, but a lot of this part of town is now gentrified with boutique shops, florists and cafés — and noticeably unaffordable housing for new migrants to New York in this day and age.

Could anything be better than fresh mozzarella with prosciutto?! | Photo by Emma Caldwell

Waiting just around the corner is an unassuming store selling the New York knish. As I’m led inside, I’m acutely aware that I have absolutely no idea what a knish is, where it comes from or what is in it. The store is so quaint, with newspaper clippings taped onto the walls and a dumbwaiter full of these almost-spherical pastry-like things on a tray. (Yep — this place still uses a dumbwaiter!) A knish is Jewish in origin, but this store sells its very own New York brand of knish.

So what is it? It’s a very thin pastry crust filled with a mix of mashed potato, onion and (optional) spinach. It’s cheap, hearty and very tasty, so the perfect food for immigrants who needed to fill their stomachs but who didn’t have much disposable income. This place is an institution in New York, and has been feeding New Yorkers since 1910.

The final stop on this extremely filling and entertaining ramble through the city is at a German beer bar for a New York staple. You guessed it, the pretzel. Is any trip to New York complete without trying a pretzel? But forget the ones on the street; these pretzels are served fresh and warm and have just the right amount of crunch and doughiness. They’re definitely the best pretzels I’ve had in my time in the US, and the best way to enjoy one is to wash it down with a light blonde-style German beer (the list here is extensive).

Full of knish and pretzel, I wander past the community gardens brought to New York by the Puerto Ricans and marvel at just what a melting pot this city truly is. It’s remarkable, looking around and seeing the different influences of people from all corners of the world in this concrete jungle. It’s hard to imagine New York without all these different facets and tastes, and I feel like my tour has been the best case study for multiculturalism and inclusion: seeing all these cultures together, eating their foods and exploring their incredible immigration stories.

Want to experience the international flavours of NYC for yourself? Hop on our Tenements, Tales and Tastes tour for a food walk through the city’s immigrant history.