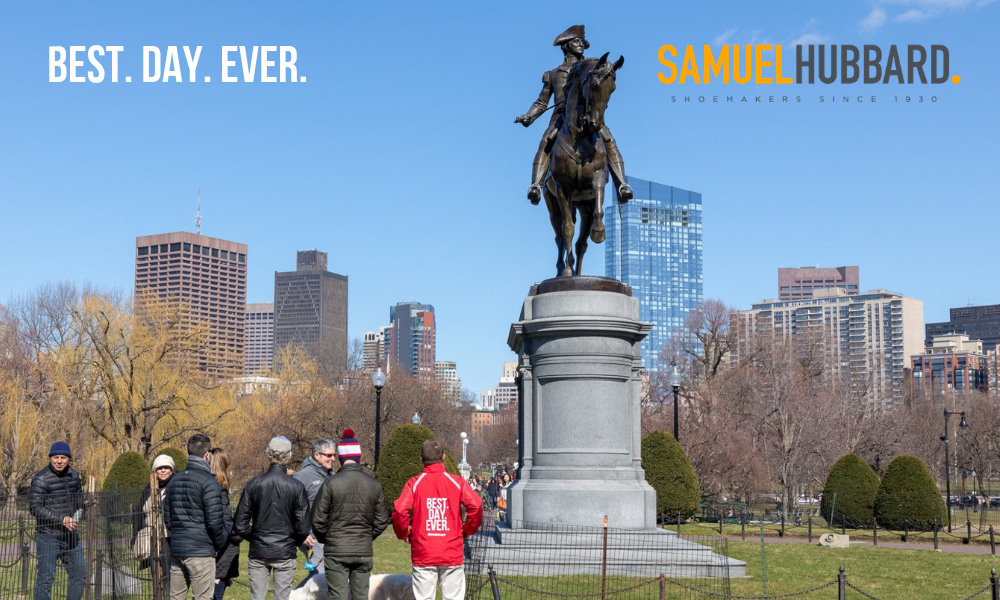 Ahh Boston. The Cradle of Liberty, the Hub of the Universe, ol’ Beantown in the flesh or, as Matt Damon so eloquently puts it, Baaawston. Whatever you call it, there’s no doubt that Boston is an incredibly rewarding — and criminally underrated — city to explore, especially on foot. With so much ground and history to cover, comfort is key on any Bostonian Urban Adventure and we’ve been “suede” by Samuel Hubbard’s Freedom First slip-ons. If there’s a better way to tackle the Freedom Trail than with the First Amendment imprinted on your sole, we’re yet to hear it, so pull up your Red Sox and get walking.

Your Urban Adventure begins in the North End by Boston Harbor, the site of the historic Boston Tea Party, which was essentially the birthplace of modern America. Far from a party, December 16th 1773 saw the American colonists opposing a series of British taxes and throwing a shipment of tea overboard in protest. And there is nothing — nothing — that’s more of an affront to the British than wasting a good cuppa. While the colonists had a fresh take on the colony’s future, the Freedom First offers a fresh take on the loafer and is made in the traditional sacchetto method. Don’t know what sacchetto means? That’s fine, Boston’s North End is home to Little Italy and you won’t be short on locals willing to talk you through it.

Boston’s North End is a criss-crossing network of streets that are home to some of America’s oldest buildings. Most importantly, the neighbourhood dishes up pizza and pasta that gives new meaning to the phrase molto bene, though you’ve got to know where to go. Luckily an Urban Adventures guide is just a local friend on the ground to help you get the most out of a city and they’ll have you sampling some spicy goodness at an authentic salumeria, ditching the crowds to tear into some freshly baked goodies at a hidden Italian bakery and sipping down real-deal espressos and cappuccinos while hearing all about the neighbourhood’s storied history.

Sacchetto, by the way, translates as ‘little bag.’ The soft leather used for the shoe’s lining is sewn together like a little sack, essentially a glove for the foot. Shoes don’t get much more comfortable than this and it’s just as well given the amount of sights Boston possesses, though you’ll wish you brought a big bag to carry as much Italian food as you possibly can.

The Urban Adventure continues down Boston’s famed Freedom Trail. The trail tells the story of the American Revolution and its collection of museums, churches, houses and graveyards is one of Boston’s most popular attractions. The city is full of historic landmarks including the house of folk hero Paul Revere, the Massachusetts State House, the Old State House and the site of the Boston Massacre. The King’s Chapel, on Tremont Street, was the first Anglican church in the USA and the first church of any denomination to have a pipe organ, which you may just be able to hear should the stars and stripes align. Failing that, the city plays host to a number of historical taverns that are perfect to drop into for a beer and a chat with the locals.

At Urban Adventures we believe you can’t truly experience a city without walking through it and visiting its markets. Quincy Market, opened in 1826, is Boston’s oldest, like a city within a city: a thriving little ecosystem that’s been supplying locals with retail goods and all the food — seriously, all of it — for over 190 years. We’re talking creamy clam chowder and cannelloni, Philly cheese steaks and lobster rolls and so, so much more.

While we’ve partnered with Samuel Hubbard to make your Urban Adventure a little more comfortable, they’ve also partnered with the News Literacy Project to help educate students on how to be critical consumers of news. For every pair of Freedom First loafers purchased from samuelhubbard.com, $20 will be donated to the NLP to fund classroom materials because education is a critical part of freedom.