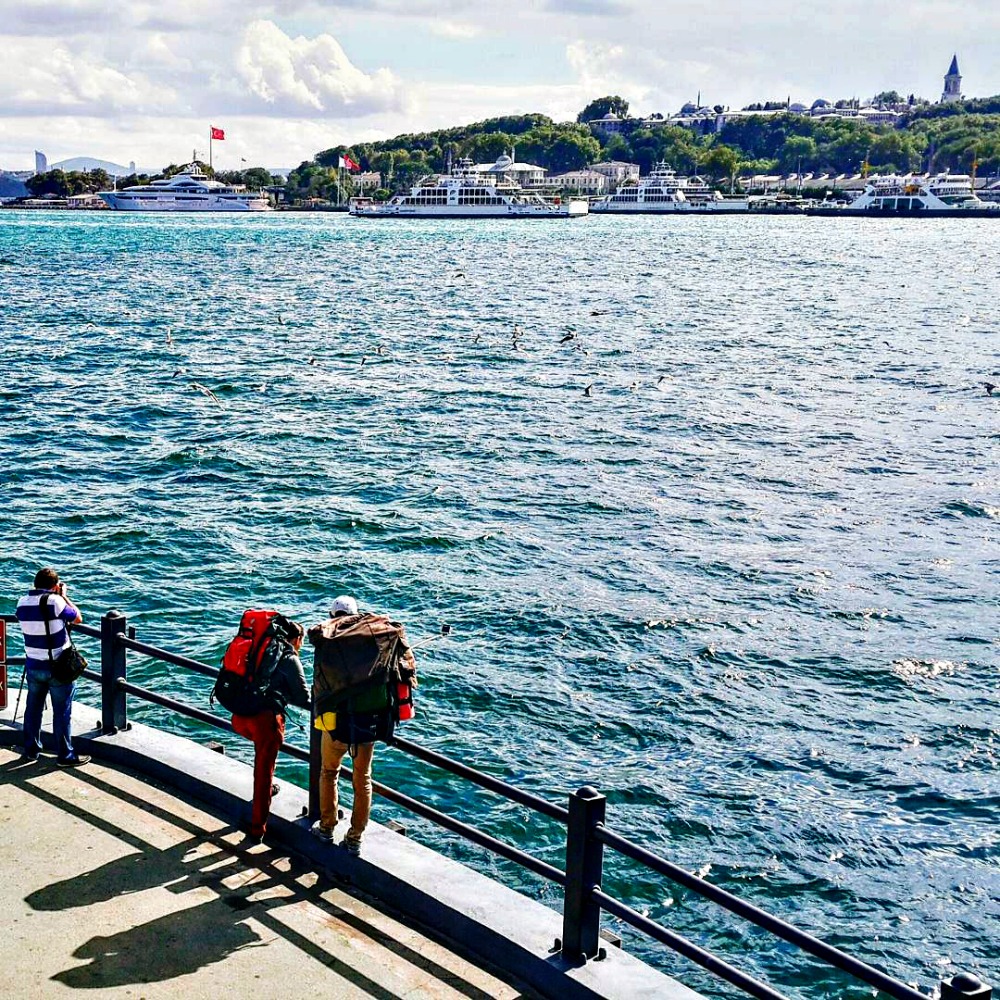 The complete guide to: Istanbul travel

Istanbul houses a vibrant and eclectic culture that draws from both the East and the West. With an abundance of intricate architecture, a beautiful language, fascinating traditions, and amazing food (and coffee… and desserts…), your chances of experiencing culture shock (in a good way!) are pretty likely.

Travel is rewarding, but it can also be exhausting — and so much more when you don’t speak the local language or know what to expect. No problem, our complete guide to Istanbul is here to help you out. We’ll give you some tips and tricks to getting around and ensure that you don’t get caught up in planning and forget to savour all the amazing experiences!

Getting to and from IST and other airports

There are several ways to get from Istanbul’s Atatürk Airport to the city. Public transit is always a great option, with a journey from the airport to Zeytinburnu metro station costing 4.00 Turkish Lira (TL) each way. From Zeytinburnu, you can switch onto the T1 Tramway and continue on to Sultanahmet. You need to buy tokens for the metro and tram from the ticket offices or vending machines that are at each station.

Taxis are a safe option too, with both airports (Istanbul Atatürk Airport and Sabiha Gökçen International Airport) offering taxi rides into the city. Taxis in the city are metered, so always check if the metre is on when getting into the car. A taxi from Atatürk Airport should cost TL 50 to Sultanahmet, and about TL 55 to Taksim. From Sabiha Gökçen Airport, a trip into the city should cost about TL 130. Taxis line up outside of both airports, so avoid all taxi drivers that approach you inside the airport.

These two backpackers were so excited to see the view, they didn’t even stop to drop their stuff off.

If getting around a foreign city has got you fazed, worry not, we’re here to help! Public transportation can seem a little intimidating at first, but it’s one of the easiest (and cheapest!) ways of getting around the city. If you’re staying in the city for a few days it’s worth buying an Akbil or Istanbul Card. The cards are available from Bakkal’s (a private vendor kiosk) and IETT counters.

The card has a one-time fee of TL 6 and, similar to public transportation cards in many cities around the world, all you have to do is top the card up whenever you run out of money on it. A single journey token costs TL 4, and with your Istanbul Card, the fare is reduced to just TL 2.30. The initial cost of the card is well worth the savings if you’re here for a few days, and gives you quick and easy access to public transportation in the city. The Istanbul metro is open from 6am to approximately midnight (some lines and routes run till 1am), but always double-check train and bus schedules.

If you’re a techie and can’t be separated from your smartphone, there are plenty of great apps that you can download on your phone that are perfect for planning your trip around the city! Check out the Metro Istanbul app for quick information on how to get around Istanbul using public transportation. The Bitaksi app is great for taxis, and Trafi is a public transportation app that is also great for real-time information.

Taxis are widely available in the city. As we mentioned earlier, while taxis are very safe, always ensure that the taxi you are getting into is metered, and always look for yellow cabs. Rides will vary depending on how far you’re travelling but are usually around TL 15.

Walking is the best way to see the city — and it’s free! Walking around the city is mostly safe, but we recommend not walking the back streets of the city alone at night as a precaution.

Another interesting option to get around the city is the dolmuş, which is sort of like a shared taxi that runs set routes between cities all night. Prices will depend on where you’re going after dark, but are usually in the TL 4-7 range.

Things to do in Istanbul

Istanbul is a vibrant city, with plenty of things to get up to! Turkish people are obsessed with sports — especially football (soccer for all the Americans and Canadians out there!). Everyone from age 5 to 95 watches it, and if you want to see the locals at play, don’t leave the city without attending a match. A ticket to one of the national comp games will set you back EUR 10 for the Basketball Super League and EUR 25 for football games. Most locals are either Fenerbahçe or Galatasaray supporters, but if you’re really cool you support Beşiktaş. The National Comp runs from September to May.

Amidst the hustle and bustle of the city, you’ll find quiet spots like these to think and reflect…

If you’re into the rock and alternative music scene, try checking out places like Jolly Joker, Hayal Kahvesi, or Line Music Club. Istanbul nightlife is guaranteed to rival any other European city. Sing along to classic English rock, listen to the saz (a stringed instrument similar to the bouzouki) in a local meyhane (traditional restaurant or bar), check out the alternative venues and discover modern Turkish rock, slip across the Bosphorus to Kadikoy where there are more locals and the venues are a lot less crowded, or head to Shaft, where they have jazz, blues, and rock most nights of the week. Most of the live gigs and clubs can be found in the Taksim District, Bebek, or Ortakoy. To find out what’s happening on the music scene, check out Time Out Istanbul or The Guide Istanbul.

Local venues ask for payment at the door, and prices will range from anywhere from TL 10-100 depending on the kind of show you’ll be seeing.

If you’re looking for a more traditional experience on your night out, start with mezze (a selection of small dishes to accompany alcoholic drinks) and raki (anise-flavoured Turkish alcoholic drink) in a lively meyhane. Or try out one of our Urban Adventures tours, like the Istanbul Night Tasting Trail for an introduction to street food and night life.

Here are some other must-attend events happening in Istanbul that are definitely worth checking out:

Istanbul’s Tulip Festival starts in April, and the city comes alive with vibrant colours, and picnics in the park become a daily routine. Check out Emirgan Park or Gulhane Park near the Topkapi Palace for the best tulip displays — the best part is that’s its free. Whoever said Holland had the best tulips hasn’t been to Istanbul.

Another cool even taking place is Istanbul’s International Puppet Festival, which takes place in October. The festival will feature international puppets, and our own Karagöz and Hacivat legends in Ottoman Culture.

Ramadan is also a great time to visit the city. The ancient Hippodrome comes alive after 6pm with the breaking of the fast. Join locals in one giant picnic!

For more information on how to get tickets, or to learn more about events, venues, or parks, check out the Guide to Istanbul or Biletix.

Looking for more things to do? Urban Adventures offers several day tours in Istanbul, all led by local experts that will give you a taste for local life in the city:

Home Cooked Istanbul
Nothing beats home cooking, especially Turkish home cooking. Join this Istanbul tour to be treated to a feast at a local family’s home, as well as other oh so Turkish pursuits: drinking tea, playing backgammon, and hitting the water pipe!

Istanbul Uncovered
Istanbul is a beautiful city, but it pays to know where to look. Join this Istanbul tour to be shown the unmistakable icons as well as the hard-to-find secret spots that make Istanbul so captivating.

Picnic on Two Continents
Taste the very best of Istanbul’s local snack food on this delectable food tour. Explore the Spice Bazaar and meet friendly traders who will reveal their treasure trove of local delicacies.

Istanbul Conquered
This is the ultimate all-in-one introduction to the sites everyone must see in Istanbul, with a locals-know twist. Visit Turkey’s iconic historic spots such as the jaw-dropping Hagia Sofia, the beautiful Blue Mosque, and the pretty, tree-lined ancient Hippodrome, and learn how Istanbul has stood strong through the centuries.

Istanbul Night Tasting Trail
This culinary adventure takes you on foot, away from the tourist trail, to search out the hidden gems of Istanbul’s thriving street food scene. Learn what’s trendy today in Turkish cuisine and sample a variety of tasty treats as you work your way through the best food in Istanbul.

In Focus: The Olive Tree of Istanbul
Syria’s civil war has triggered the worst humanitarian crisis of our time. Join us as we travel to the Capa district of Istanbul and visit Small Projects of Istanbul, a local NGO helping displaced Syrian families.

Istanbul on the big screen

Istanbul is often chosen as a backdrop in films because of the beautiful scenery, cultural traditions, and the rich history of the city. If you want to watch a film to get you hyped for a visit to Istanbul, we’d recommend checking out Crossing the Bridge: The Sound of Istanbul, directed by Turkish director Fatih Akin, The Water Diviner. Or if you want a big-name blockbuster, Skyfall, from the James Bond series. (Our favourite scene is the one on top of the Grand Bazaar!)

Istanbul is the perfect mix of both Europe and Asia

If you’re looking for some music to put you in the mood, we recommend giving Istanbul (not Constantinople) by They Might be Giants or anything by Mercan Dede a listen. They’re awesome soundtracks to the city because they are a great mix of traditional, old fashioned Turkish music, and a blend of the old and the new — modern, mystical, and quintessentially Istanbul.

If you’re looking for some great reads about the city, give Istanbul — Memories of the City by Orhan Pamuk a go. His novel, The Museum of Innocence, is also worth a read. Another good read is Last train to Istanbul by Ayse Kulin. This one is a perfect fit if you love war and family drama. The Janissary Tree by Jason Goodwin is about the Ottoman Empire and is a thrilling combination of mystery and intrigue that’s set in 1836. For a good mystery, try one of Barbara Nadel’s books which are all set in Istanbul and demonstrate her love for the city and culture.