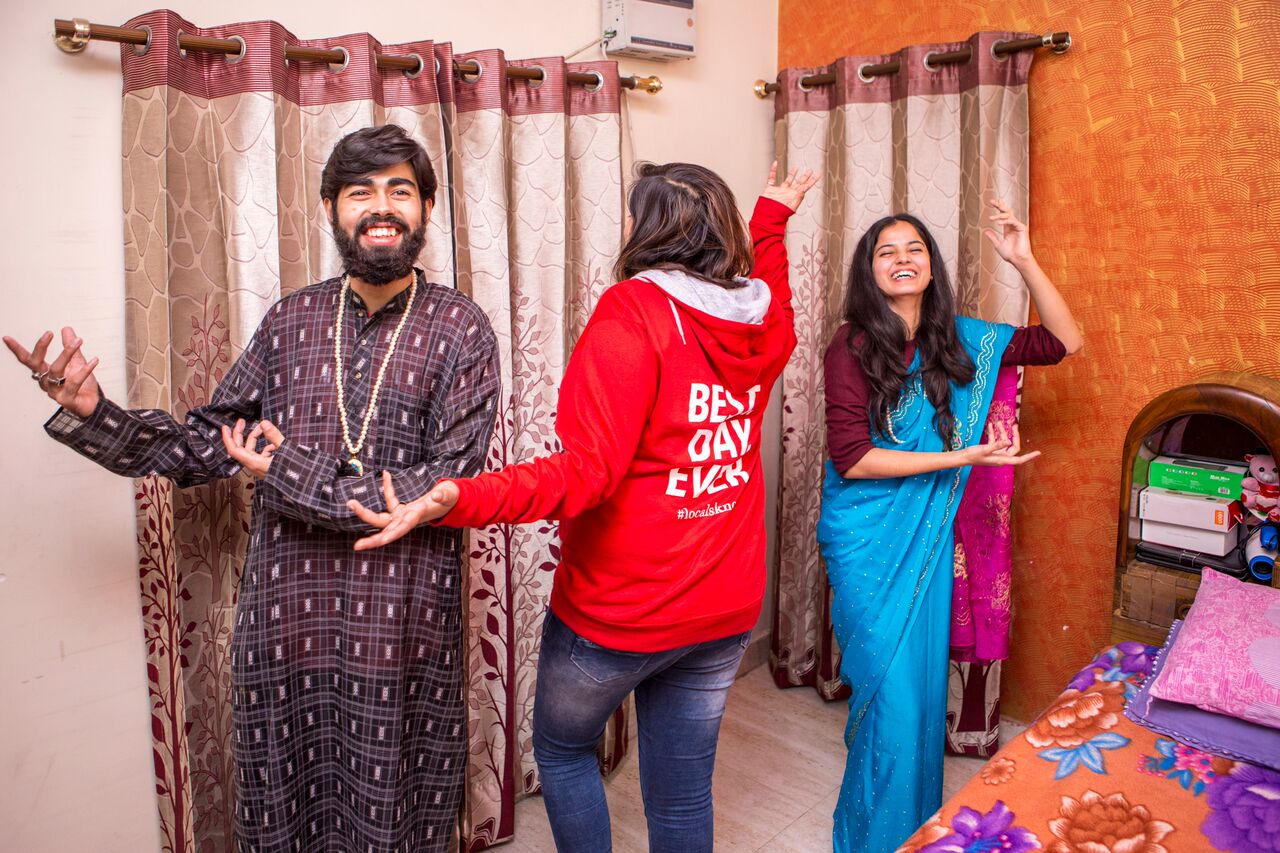 We met Komal (Komi to her friends) on the Home Cooked Delhi tour for an afternoon feast. The pakora, masala chai, roti, lentils, and various other delightful things we’ve unfortunately forgotten the names of were delicious, but beyond the food, it was the afternoon with Komi that gave us just what we wanted out of this trip. It was a glance into one young woman’s experience living in India — and it gave us a lot to think about as we explore more of this part of the world.

On the hour-long minibus trip to her house through the chaotic Delhi traffic, Komi told us about herself and how she came to be a tour leader for Urban Adventures.

She said her motivation was in large part thanks to her mother, Babita, as well as her grandmother (who is often also present for the tour but was sadly absent for ours due to illness). Babita had worked right up until the birth of Komi’s younger brother, with Komi being cared for by her grandmother. But by the time Komi’s brother came along, grandma wasn’t able to look after him the same way she had with Komi. And so, Babita had to stop working and become a full-time mother. She supported Komi’s aspirations to make a career for herself, in part, because she wanted her daughter to live the life she hadn’t been able to.

Komi’s motivation also stemmed from the desire to achieve financial independence and to be able to support her family. When she was a teenager, an unscrupulous tenant in her parents’ house brought a lawsuit against them and forced them to move out of their home for three years. During that time, her father struggled to support the entire family — and Komi decided she wanted to help.

So, she resolved to work as a tour guide. It was a risk — as a teenager, she’d been pretty shy. And her mother was dubious about her choice of career, but thankfully her grandmother was supportive (and in India, the approval of the elders of the family carries an enormous amount of weight). So she went for an interview, Intrepid saw her potential, and she was hired.

But there was still opposition from various people, including neighbours and family friends. Tour guiding is a respectable job, but to many people, it’s not a job for a woman. Young women can have jobs and study, but if they don’t have a plan for themselves — or if they aren’t successful — then marriage looms over them, almost as a consequence. Komi’s certainly not opposed to the idea of marriage, but she wants it to be on her own terms, rather than anyone else’s idea.

Happy travellers on one of Komal’s Home Cooked tours

A year into the job, a lot has changed. Komi has changed; thanks to the support and mentoring she got from Intrepid, the bubbly young woman who is totally at ease inviting strangers into her home emerged from behind the shy teenager. The attitudes of her friends and neighbours have changed. When they saw the success she was having — and the fun — the criticisms dried up and were even replaced by enquiries as to whether Intrepid was hiring.

Her mother Babita often helps with the cooking on Komi’s home cooked tour (Komi admits that she once confused fennel and cumin when making bread and it didn’t go down well), and Komi is glad that she can help her mother make a role for herself in the world beyaond that of a wife and mother. And now, after Komi was made tour leader of the year twice, Intrepid is exclusively hiring women as tour guides in India to redress the balance in the local workforce (and, we suspect, to find more talent like Komi’s).

It’s an inspiring story (and one that has been in covered in publications like The Guardian), but just a story of Delhi — not yet a story of the whole of India, says Komi.

Her family were attracted to Delhi in the first place because of its progressive and multicultural makeup – a far cry from the more rigidly traditional attitudes found in the smaller towns and villages. Komi’s parents married for love in a country where 60% of the marriages are arranged. The prevailing attitude is that everything women do should contribute to their value as a wife.

When Komi returns to Jaipur to visit her grandmother, other women come up to her and start offering their sons as prospective husbands, hoping to reel her in by listing his career and his salary. They can’t believe that her hair has been dyed, and ask her mother what she ate during her pregnancy to colour Komi’s hair. There’s a mixture of fascination and disdain for her looks, her un-ladylike manner, and her independence. Even her mother wasn’t sure when Komi got tattoos (“Who will marry you now?” she asked. “A boy with tattoos,” came the reply). And it’s for this reason that Komi would rather stay in Delhi, with all its poverty, noise and chaos, than move back out to where her lifestyle would be frowned upon, or even impossible.

We hope that more young women feel able to follow Komi’s example in future, and that they in turn support their children the way Komi’s parents supported her — as she’ll no doubt inspire her children should the time come.

A version of this article originally appeared on Jon and Georgia’s Adventures and has been republished with permission.

India is known for its amazing food, and we know just where you can find the most authentic culinary experience in Delhi: at home with a local. Our ‘home cooked’ Delhi food tour is less tour and more unique local experience, and is hands down one of the most authentic things to do in Delhi.