Blog > The faces we met in Cape Town 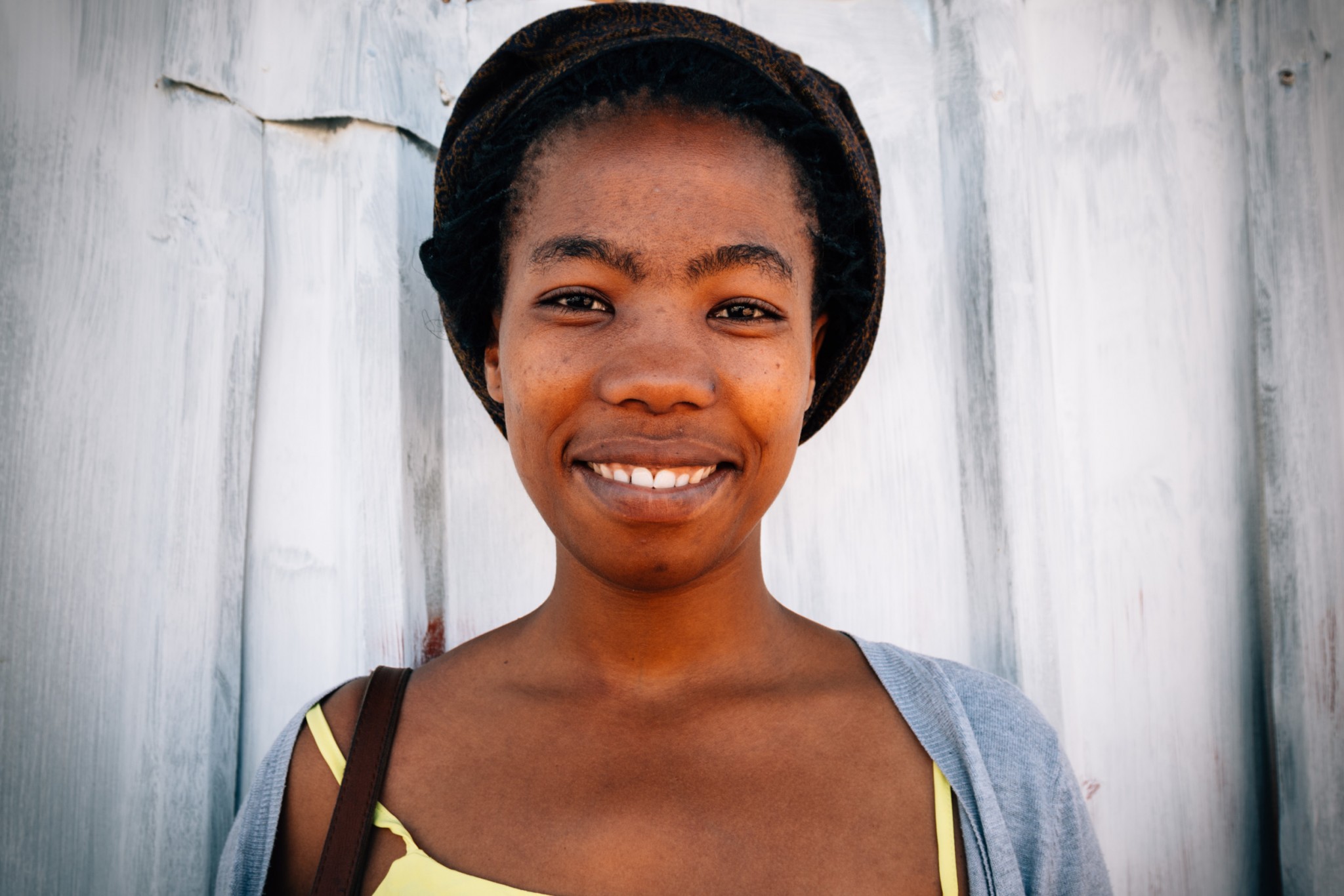 The faces we met in Cape Town

As our white SUV swings around the corner and begins the steep drive into Imizamo Yethu, the leafy mansion-lined streets of Cape Town’s wealthy Constantia instantly fade from memory.

Here, in one of South Africa’s most infamous townships, the street is cramped with colourful tin shacks instead. Layers of rusted iron sheets nailed together to forge a home, the leaning structures both support and jostle each other to claim every square inch of the muddy spare ground. People mill about, some run to the bus stop outside, others laugh as they call to each other in Xhosa — one of South Africa’s 12 official languages.

As we roll to a stop, I clutch the camera in my hands a little tighter and silently will my heart rate to slow down. Until now, we’ve been warned away from townships just like this one, by horrifying stories of poverty, crime, and gang violence. Yet here we are. Standing nervously beside a main road in a township abuzz with activity on a warm spring day.

“Welcome to our home!” A young Xhosa woman bounds over to us with her arms extended. In jeans and a yellow top that wouldn’t look out of place on a Milan catwalk, her beaming smile radiates like the sunshine around us.

This is Nandipha (Nandi, she tells us), our guide through Imizamo Yethu, an 18-hectare informal settlement formed in 1991 on the slope of a mountain overlooking the Hout Bay area. Officially, the records list about 33,000 people living here, though Nandi points out that this doesn’t account for unregistered or foreign residents. The real number, she estimates, is much closer to 45–50,000.

“Today, you’re our guests. I want to show you the real township and how we live here,” she says. “Imizamo Yethu is Xhosa for ‘our collective efforts.’ We built this community, and we are proud of it.”

Feeling at ease in her presence, we follow her lead, slipping into the rabbit warren of crooked houses and narrow laneways. Numbered with scrawling black pen, most homes are tin and wood while a lucky few have a sturdy concrete wall. Cardboard and rugs provide makeshift floors, electrical wires run haphazardly overhead. A four-toilet block that services a few hundred people stands locked, the keys kept by a supervisor to avoid vandalism and violence.

Women chat as they hang out washing on lines strung up between shacks and concrete blocks. Small children dart around their feet playing tag, while the sounds of local radio drift along the street. Wandering past the open door of a small shack, an old man watches a small TV set with one eye, and us warily with the other. A woman prepares food with a neighbour’s baby strapped to her back, while a group of teenage boys kick a soccer ball back and forth to each other with considerable skill.

This is ubuntu, a shared way of life. It stems from the ancient Xhosa word meaning ‘humanity to others,’ which Nandi tells us is an intrinsic part of life in Imizamo Yethu, and something that the community is extremely proud of.

Back on the main street we pass by Phillip’s Tavern. It’s one of many pubs in the area, but caters to a younger clientele while the other taverns tend to be frequented by mostly older men in the community. Here, shacks have blossomed into general stores full of food and supplies with business names painted on tin shopfronts. There’s a town hall, and several schools for varying grades and ages. Hardship fosters creativity and resourcefulness, and an entrepreneurial few are turning theirs into success. Phillip’s Tavern, the only pub in Imizamo Yethu | Photo by The Common Wanderer

Remove the place and the prejudice, and it’s a street scene like any other. Except that here, the wait for a proper government house to be built can literally take a lifetime. But, despite what you might expect, there is clean running water at the communal taps and in the houses. Nandi points out at one of the taps that the water is clean and safe to drink, and laughs at our surprise at just how normal life seems here. “We didn’t invite you here to feel sorry for us,” she says. “This is our collective effort, remember? We may not have much, but we make the best of it. Here, we live by hope.”

Entering a small primary school as morning lessons wrap up, a roar of noise greets us. It’s immediately clear Nandi’s a crowd favourite, and we soon find ourselves in the midst of 30 exuberant 4- and 5-year-olds hugging and dancing with rhythm we can never hope to obtain. Having fun with the local kids | Photo by The Common Wanderer

“It’s hard to have good role models here,” says Nandipha later as we wave goodbye to our excited little friends.

Township life can be hard for youngsters here as they navigate the obstacle course of adolescence with the added threat of substance abuse, teenage pregnancy, and high school dropout rates. Many see no hope for their future and turn to drugs to numb their pain, prostitution to put money on the table.

“When girls don’t have that positive person to look up to, they lack motivation, they get bored. They sleep with their boyfriends or take drugs because there’s nothing else to do. They get pregnant, they drop out of school because they can’t cope. Then the cycle continues.”

It’s a cycle that Nandi has been working tirelessly to change through Sistahood, the not-for-profit girls’ organisation she founded in 2010. The club provides teenage girls with tutoring, life skills sessions, and social activities. More importantly, it provides them with a sorority. It’s a safe place for support in tough times, and inspires young girls to dream beyond the township and make plans for their future.

Nandi pauses, and asks us to look out over the Hout Bay Valley below.

“As a young girl, I used to come here and look out at the big white houses in Hout Bay. I was so angry. Why did they get to live there, while I lived like this, here? But as I grew up, I changed my heart. I let go of the anger, let the love in. Now, I’m inspired by the difference. I look to the future, and do my part to make my community a better place.” That’s not to say Nandi hasn’t had her own struggles. She’s seen family members imprisoned, suffered discrimination, and still struggles to make ends meet some days. For now though, she turns to us with bright eyes. “I hope you’ve come to understand our special community better now,” she says as a farewell to us at the edge of the township. We’re feeling moved, inspired, and hopeful, our preconceived ideas about township life falling away.

If Imizamo Yethu is ‘our collective efforts,’ people like Nandipha are the proof. Inside her lives hope, and everything good about the new South Africa.

The Best Way to Eat and Drink in Tbilisi – is With a Local
Lonely Planet Best in Travel 2020: What not to miss according to locals
9 ways to be a plastic-free traveller
Over-Tourism in Santorini: What’s the solution?
How taking an Urban Adventures tour can help the local community