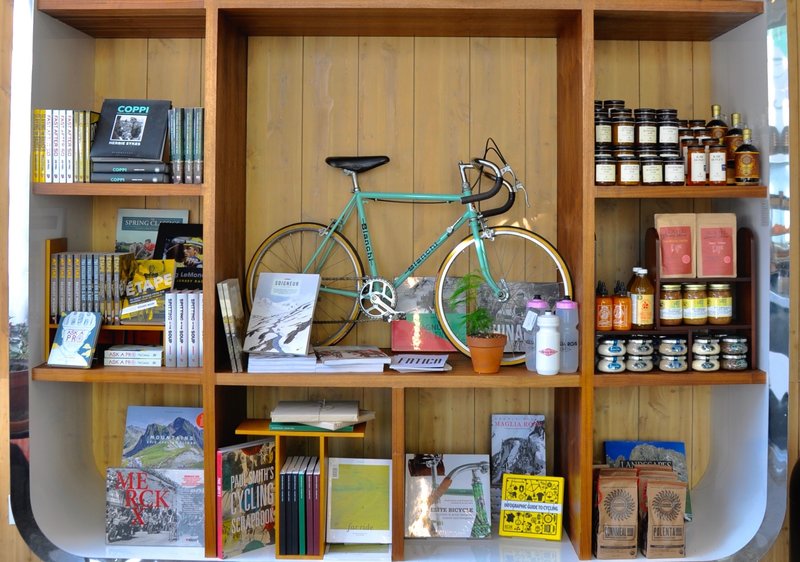 At a table by the window on a sun-drenched corner in Industry City, Brooklyn, I’m sitting with Manuel Mainardi, originally from Milan, Italy, and founder of Maglia Rosa NYC. It’s early on a Thursday afternoon, and it occurs to me that we’re doing exactly what he has hoped people will do in this space: chatting, drinking coffee and checking out the gorgeously curated selection of stylish apparel, delicious food and custom hand-built bikes on offer, here at his newly minted second location in Brooklyn.

“I came here 20 years ago, thinking I was going to stay for three months, and I just never left,” Manuel recalls. “Originally I just imagined myself opening, like, a hole in the wall, with a coffee machine, hanging two bikes — and that’s it; selling coffee, and basta,” he says, using the Italian term for “that’s enough.” But since opening in 2013, the Maglia Rosa brand has grown well beyond that.

While the focus of his first shop, located on a quiet residential corner of nearby Carroll Gardens, is largely on custom-building bikes, repairs and maintenance, Manuel sees Maglia Rosa Industry City as a hub for the growing community of artisans, new media types and others in creative and light manufacturing fields flocking to the neighbourhood.

Redeveloped as “Industry City” beginning in 2013, this area was first built up in the 1890s as Bush Terminal, a massive complex for manufacturing, warehousing and shipping, here on the waterfront in the Sunset Park neighbourhood of Brooklyn. The present development aims to capitalise on the creative and innovation economy that has bloomed in Brooklyn in recent years. In fact, one of Maglia Rosa’s many notable neighbours in Industry City is the headquarters of NYC’s bike-share program, Citi Bike.

With dedicated bike lanes rolling out through the boroughs, bike commuting on the rise, and the state of the city’s subways more in question than ever in recent memory, Industry City feels poised to become a bike-commuting hotspot. The shop is outfitted with two free self-service bike repair and maintenance stands, and will begin offering classes this winter. Along with hopes for a liquor license, these will provide yet another draw to stop in, have a bite or sip, and catch up with coworkers or neighbours who may happen to roll through.

A bike shop where you can hang around, drink coffee and chat with friends | Photo by NYC Urban Adventures

But Maglia Rosa isn’t just there to keep your bike rolling; they aim to keep you looking sharp and feeling comfortable in the saddle as well. Like any small shop, they carry a range of their favourite parts and accessories, but distinguish themselves with their custom line of continental-chic cycling gear, and their extraordinarily comfy athleisure line. From handmade caps to fleecy cotton hoodies and t-shirts, Manuel loves how “they’re super soft, super warm,” but warns, “never lend one to a girlfriend or boyfriend… you won’t see it again!”

From its picture windows and white walls welcoming the afternoon sun, to splashes of colour and contrast from the bikes and vintage posters, it’s no accident the shop is easy on the eyes. Manuel’s background as a fashion photographer and founder of his own production company shows through in his keen eye for aesthetics and attention to the most minute details.

When it came to choosing Industry City for his second location, Manuel never hesitated. He did his homework, and knew the kind of community he would count on growing up around him; the community he is building this space for. “With their own background, whether it’s engineering, whether it’s art, whether it’s design, whatever it is, they all do this for a sense of love.” Sounds like he’s right at home.

You can visit local NYC indie business owners just like Manuel on our Made In NYC: Industry City Brooklyn tour.

Made In NY: Industry City Brooklyn

This morning tour of Industry City is a great way to jumpstart your day in Brooklyn! Explore the neighborhood with some unconventional souvenir shopping, a selection of treats both sweet and savory, and epic city skyline views! Your tour begins in the bustling neighborhood of Sunset Park, Brooklyn.