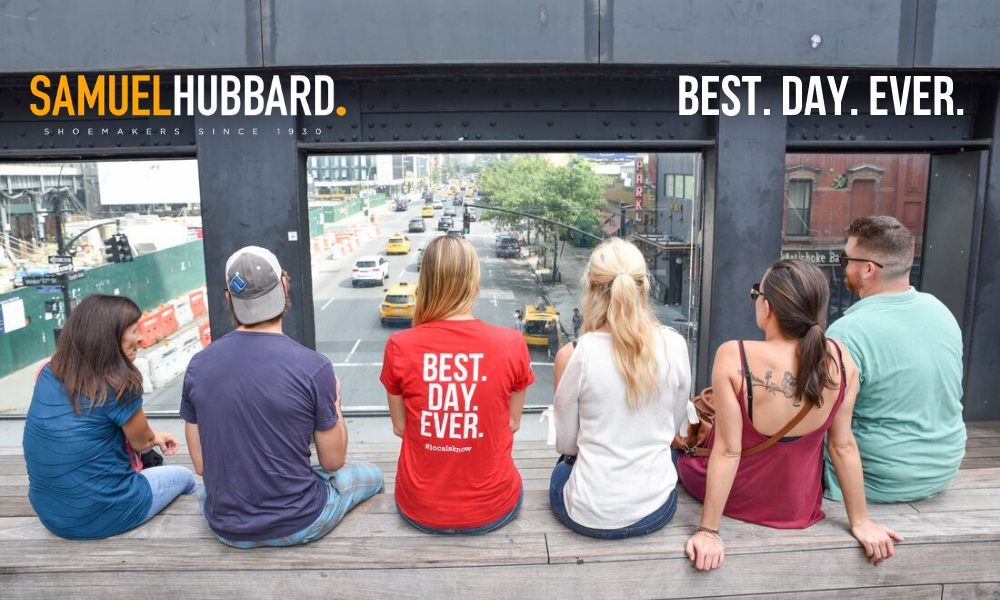 “Start choosing your shoes… we’re walking today… we want to be a part of it: New York, New York.”

Is there any city in the world that can stoke a traveller’s wanderlust like New York City? The Big Apple holds bountiful treasures from Brooklyn to Manhattan, from the depths of the Hudson River to the top of the Empire State Building. Think hot dogs, Central Park and Sinatra; think Home Alone, Seinfeld and Madison Avenue.

It’s a city that’ll capture your attention, if not your heart, at every corner and with its grid layout and numbered streets, even the most geographically challenged traveller can get around on foot. But remember, this is the city that doesn’t sleep, so you need to be prepared to see the sights then embrace the nights. Your vagabond shoes may be longing to stray but you’ll need something a little more versatile this time around, and nothing toes the line between casual and dressy like Samuel Hubbard’s City Zipper for women and the Reboot for men.

This Urban Adventure takes in New York City’s famous High Line, which has become a favourite for locals and tourists alike. The disused rail line was first opened as an elevated green space in 2009, with sections continuing to be made available until its completion in 2014. The line runs through the Meatpacking district and Chelsea and has contributed to the revitalisation of the area and their reputation as two of New York’s hippest spots.

It goes without saying that comfortable walking shoes are a must-have. New York City is best seen on foot and with some truly stunning views of the Statue of Liberty and Empire State Building, you’ll want to spend as much time as possible on your feet. Both the Reboot and City Zipper feature a full glove-leather lining that feels smoother than Sinatra’s vocals, leaving your feet lounging in Waldorf Astoria levels of luxury.

The first two sections of the High Line cost $153 million to refurbish, which may seem a lot for a park, but since being opened the walkway has generated an estimated $2 billion in new developments, according to the New York Times, including more than 2,500 residential units, 1,000 hotel rooms and many office and art spaces. What’s more, the High Line also passes through the famous Chelsea Market and it’s here that you’ll stop with your local Urban Adventures guide.

The first thing you need to know about Chelsea Market is that it’s a holy pilgrimage site, a place that has bred fanaticism and reverence for many, many years. More specifically, it’s the site that housed the National Biscuit Company and is the birthplace of the Oreo cookie — our creamy sandwich saviour. Though the company moved away in 1958, you can still pick up a fried Oreo with vanilla whipped cream for old — and a good — time’s sake.

There’s more to the market than Oreos. Attracting six million national and international visitors annually, it is one of the most trafficked, and written-about, destinations of any kind in New York City, a neighbourhood market with a global perspective. It takes up an entire city block and while its upper floors are home to companies including Google (who bought the market for $2.4 billion in 2018), YouTube, EMI and the Major League Baseball, the real action happens ground level courtesy of an unimaginable amount of tasty treats. So many treats, in fact, it’s hard to imagine a life without the market, which has only been in operation since 1997. You name it, they’ve got it: seafood and sandwiches, bakeries and bagels, pizza and pasta, chocolate and cheese, tacos and jerk chicken, it’s all there and waiting to be sampled.

After marinating in the sights, sounds and tastes of Chelsea Market, it’s time to check out some of the hip art galleries that have moved into the area, both before and as a result of the development of the High Line.

This is when Samuel Hubbard’s shoes really do come into their own. The Reboot features custom Vibram soles to keep that spring in your step all day, but the stylish suede design means you won’t feel like an imposter crossing the threshold at galleries like Andrew Kreps, Lelong & Co and Alexander Gray Associates. Likewise, the City Zipper features a custom-designed EVA for comfort, but delivers a sophisticated boot that would draw attention at a gallery opening for all the right reasons.

Come to think of it, they really could just feature as an art installation. But keep your shoes safe from any greedy gallery owners because your Urban Adventures guide will have plenty of suggestions for the rest of your day, and the best part? You won’t even need to change your shoes.